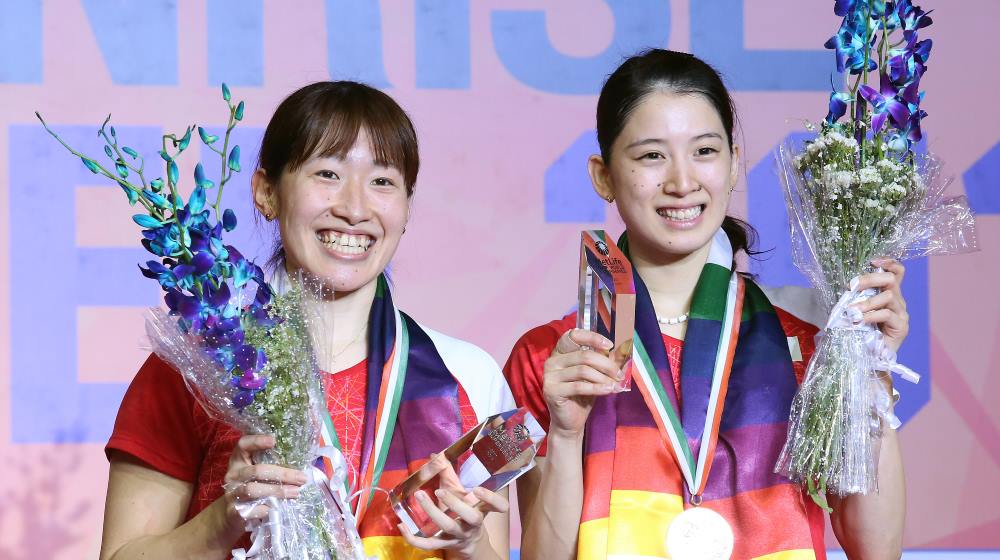 Japan celebrated the arrival of another top Women’s Doubles pair as Shiho Tanaka and Koharu Yonemoto won the Yonex-Sunrise India Open 2017 – their first World Superseries title in their first final. Yonao, who faltered in the final of the India Open for the second straight time.

Fukuman/Yonao controlled the early proceedings, winning the first game comfortably, but as the match wore on, with several rallies over 50 strokes, the third seeds started to falter. Tanaka and Yonemoto (featured image) were rock-steady, and once they took the close second game, the physical effort appeared to take its toll on Fukuman and Yonao. The third seeds fell behind early and never recovered: 16-21 21-19 21-10 in 72 minutes.

“We are quite surprised with our victory as we were in the back-up team last year and entered the top team only this year,” said Tanaka. “We were confident going into the final as we’ve beaten Yonao and Fukuman in the China Open and the National Championships last year. The last few weeks have been tough… this is our first Superseries title and we are keen to continue with our performance.”

Lu Kai and Huang Yaqiong’s bright early season continued, as they followed up their Yonex All England win with the Yonex-Sunrise India Open title. The second seeds reversed a sequence of four straight losses to compatriots Zheng Siwei/Chen Qingchen, capturing the Mixed Doubles title 22-24 21-14 21-17 in 64 minutes. “We are familiar with each other’s style of play,” said Lu Kai. “Although we lost to them four times in a row, we were able to keep our focus today and that helped us beat them. We are very happy to have had a good start to our season, with our second Superseries title this year.”

Gideon and Sukamuljo steamrolled Indonesian compatriots Angga Pratama/Ricky Karanda Suwardi for the fourth time, 21-11 21-15. Pratama and Suwardi had no answers to the fast-moving and quicksilver reflexes of their opponents. Gideon and Sukamuljo were spectacular in defence and astute in creating openings at the net: Sukamuljo was his characteristically brilliant self at the front court, intercepting nearly everything that came his way and providing the openings for his partner.

“We just couldn’t find a way past them. They were just too fast,” rued Pratama.