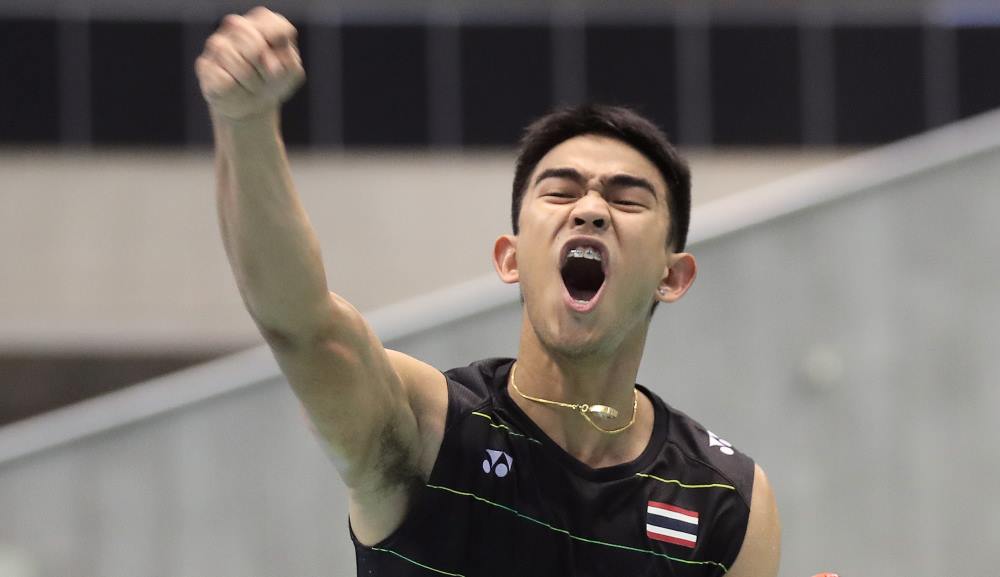 Despite the loss, Japan were assured of a quarter-final place. Today’s quarter-finals will feature: Thailand versus India; Japan versus Indonesia; China versus Malaysia and Chinese Taipei versus Korea.

Both Japan and Thailand hadn’t lost a match in their earlier group assignments against Vietnam and Philippines. Japan got off to a strong start, with Yonex-Sunrise Hong Kong Open champions Takeshi Kamura/Keigo Sonoda blasting their way past Kittinupong Kedren/Puavaranukroh Dechapol 21-17 21-10.

Thailand capitalised on the advantage, with Khosit Phetpradab (featured image) holding his nerve in a tense Men’s Singles battle against Kenta Nishimoto. Trailing for most of the final game, Phetpradab caught up at the end and stole the victory at 18-21 21-13 22-20. The tie hinged on the final Mixed Doubles match between Japan’s Yuta Watanabe/Arisa Higashino and Dechapol Puavaranukroh/Savitree Amitrapai. After an intense 59 minutes, the Thais edged past the Japanese to claim the match and the tie at 21-19 18-21 21-18.

The other Group C encounter between Vietnam and Philippines went in favour of Vietnam, who recovered from 0-1 and 1-2 deficits.

Indonesia topped Group B after beating Malaysia 3-2, with the tie being decided by the fourth match. Wahyu Nayaka Arya Pankaryanira/Ade Yusuf pulled off a thrilling win in the opening Men’s Doubles over Ong Yew Sin/Teo Ee Yi from two match points down: 21-11 17-21 22-20.

China, meanwhile, cruised to their third straight 5-0 win to top Group A. The Chinese ran into stiff resistance from Chinese Taipei in Men’s Doubles and Women’s Singles, but wrapped up the tie without losing a match.

The final tie of Group D went in favour of Korea as they beat India 4-1.