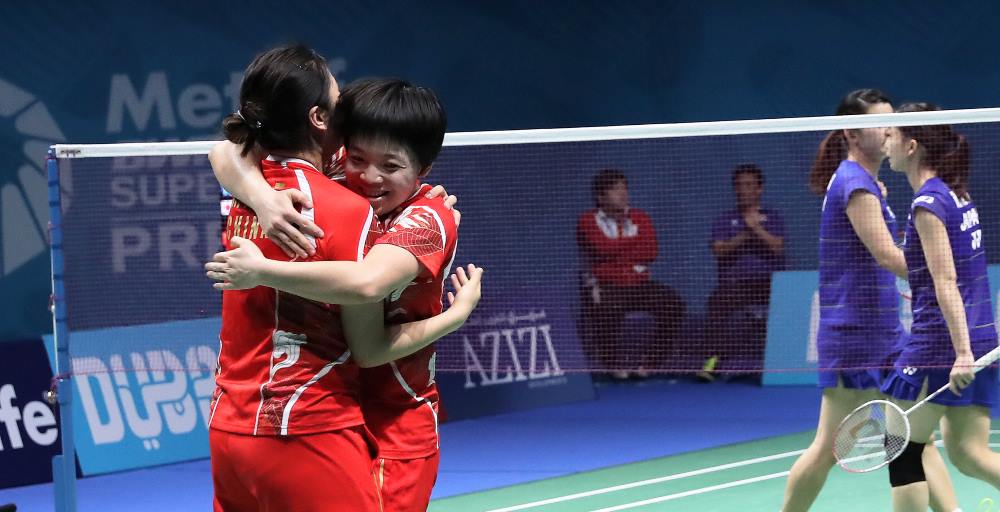 Chen Qingchen sealed her status as the most exciting doubles player on the circuit today, clinching a double crown at the Dubai World Superseries Finals as curtains fell on the MetLife BWF World Superseries season. It was Chen, appropriately enough, who leapt up to fire the winner in both matches.

“I’m very excited and very happy to win two titles,” said Chen. “I was very tired in the second match but I must thank my coach for his advice. I hope we will have more success in the coming months.”

The Women’s Doubles final was fought on even keel until fortunes turned China’s way in third. Matsutomo had been a pestilence for her previous opponents with her roving presence at the net, but the Chinese completely took her out of the equation by sending the defensive shots high over her and keeping Takahashi on her toes. Matsutomo’s frustration showed as she fluffed a few sitters, and the Chinese had the first game in the bag.

The pattern changed in the second with Matsutomo exerting her presence once again; Jia Yifan was

targeted, with the Japanese constantly flick-serving her and extracting defensive returns. Unfortunately for the Japanese, the tactic backfired in the decider when Matsutomo was faulted a couple of times; the rattled Japanese started to get shaky on serve and the momentum swung China’s way. Chen, the livewire on China’s side, set up three match points with a stunning pick-up at the front; the match was won on the next rally allowing the excitable Chinese to burst into celebration: 21-15 13-21 21-17.

“We didn’t expect this. We feel really thrilled, super excited right now and we still cannot believe this moment,” said Jia. “We knew this was going to be a tough match because they are ranked higher. The last time we beat them we thought we were really lucky to win that match.” England’s defending champions Chris and Gabrielle Adcock’s challenge lasted until midway in the first. Thereafter, their defences were blown to bits by the fast-moving, hard-hitting and quick-thinking Zheng and Chen.

The second game was a washout for the England duo, who were unable to get any kind of look-in; the Chinese picked their spots and fired their winners, with Gabrielle Adcock in particular unable to counter Zheng’s fierce smashes directed at her. Chen had her double crown at 21-12 21-12.

“I’m not too sure what happened, to be fair,” said Chris Adcock. “Super disappointed with the performance after such a good week and after such a good level yesterday, especially me. I really didn’t get up to speed today. Credit to them, they really made it difficult for us, we know we have to be up to our speed because they are a fast pair also. But really disappointed with the performance and obviously with the result as well.” Goh and Tan were a picture of unruffled calm. There was never a moment when they looked hassled as they parried everything that Kamura and Sonoda threw their way. The Malaysians’ airtight defence gave the Japanese nothing to work with; while their own attack was judicious but deadly. The 21-14 21-19 result was achieved on the 40th minute, giving Goh and Tan the second World Superseries win of their career.

“It’s a little unbelievable… finally we achieved our targets this year. It has been an amazing year for us,” said Goh. “The title means everything because as the World No.1 pair, we had to everything to prove. The timing and feeling on court was very good. Now we have to take a breather and analyse our year.”