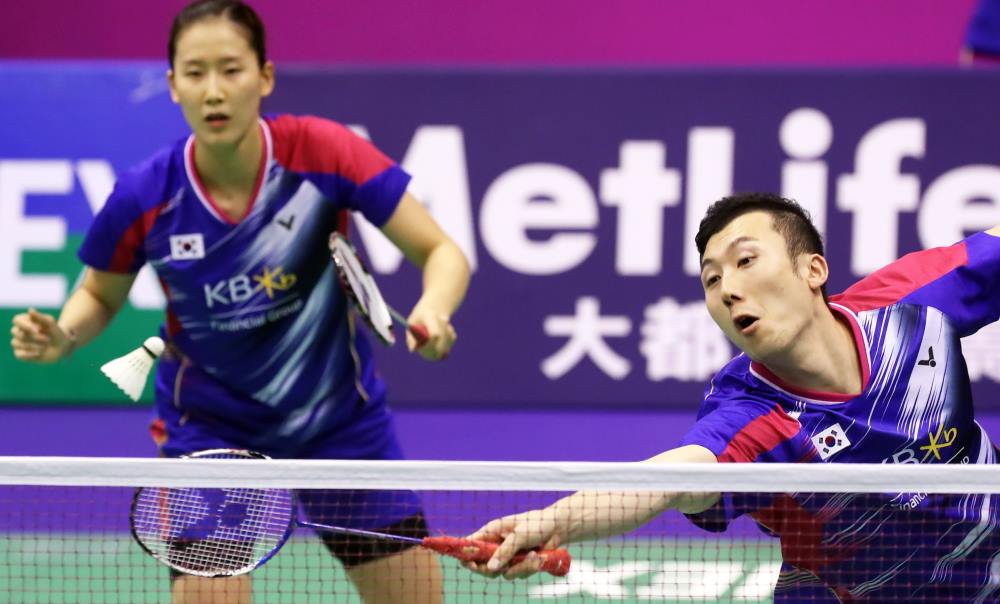 The main rounds of the Yonex-Sunrise Hong Kong Open begin tomorrow, but there was frenetic activity today as all categories saw a full complement of qualifying round entries. Forty-eight matches for the four qualifiers in all five categories reflected the intensity of competition as players threw in their best efforts to make an impression at the final stop in the tour.

For those in the running to qualify for the Dubai World Superseries Finals (December 14 to 18), the Hong Kong Open offers the final chance. The post-Olympics period has seen several categories open up as a result of retirements and withdrawals of several stalwarts, raising the hopes of those ranked below them.

The first round matches of the Mixed Doubles sealed the spots of the eight pairs that will make it to Dubai.

Olympic silver medallists Chan Peng Soon/Goh Liu Ying (Malaysia) trailed Japan’s Kenta Kazuno/Ayane Kurihara by just under 5000 points and needed to make the final to have a shot. Both pairs were favoured to win their opening round matches, but Kazuno/Kurihara were surprised by home pair Lee Chun Hei/Chau Hoi Wah 21-11 21-15. Luckily for them, No.4 seeds Chan/Goh also crashed out, to Korea’s Yoo Yeon Seong/Chang Ye Na (featured image) 21-12 21-11, ensuring that the Japanese will take the eighth spot when the Destination Dubai Rankings are released next week. However, second seeds Praveen Jordan/Debby Susanto, their Indonesian compatriots and Olympic champions Tontowi Ahmad/Liliyana Natsir and former Hong Kong Open champions Chris Adcock/Gabrielle Adcock made it through to the second round without trouble.

Denmark’s Kim Astrup, who’s within sight of qualifying in Men’s Doubles with his partner Anders Skaarup Rasmussen, stated at last week’s Thaihot China Open on how keen they were to qualify for Dubai.

After winning the first round, Astrup said: “I just said to Anders when the final point came our way, that maybe this is the biggest victory we’ve ever done. Not because of the result but the meaning of it. We’re fighting very hard to reach the Dubai Finals. This was an important step.”

Astrup and Rasmussen are behind compatriots Mads Pieler Kolding/Mads Conrad-Petersen, but a third Danish team, Mathias Boe/Carsten Mogensen, are breathing down their necks. Only two players/pairs per nation are allowed to qualify. Astrup and Rasmussen, though, might rue their luck as they have a first round appointment with the in-form Goh V Shem/Tan Wee Kiong (Malaysia), while Kolding/Petersen and Boe/Mogensen have relatively lighter opponents.  Still, Astrup and Rasmussen can bank on the fact that they beat the Malaysians at the recent Yonex French Open in straight games. Most of the Men’s Singles spots for Dubai have been decided, but players like Hong Kong’s Wong Wing Ki, Hu Yun and Chinese Taipei’s Chou Tien Chen have a slim mathematical chance if they reach the late rounds. Germany’s Marc Zwiebler is currently in the top eight, but quite a lot could depend on his face-off with Hu Yun tomorrow.

Although Chen Long (China) is way down in the rankings, he will get a wild card as Olympic champion.

Denmark’s Hans-Kristian Vittinghus, runner-up at the Dubai World Superseries Finals in 2014, had a strong chance at qualifying this year, but had to miss the last two Superseries due to a surgery for appendicitis. Compatriot Viktor Axelsen, who is ahead of him by just a couple of thousand points, sealed his spot and chose to skip the Hong Kong Open after his semi-final performance in China.

The situation is just as tight in Women’s Singles. With seven players assured of qualifying (including Spain’s Carolina Marin, as the Olympic champion even if she doesn’t make it on points), there is a lone spot available. PV Sindhu’s China Open triumph helped her get within sight, but she still needs a strong performance in Hong Kong. India’s Sindhu, Saina Nehwal and Japan’s Sayaka Sato are within a few points of each other and have a chance to qualify. Japan’s Minatsu Mitani also has a slim chance, provided she first gets past Chinese Taipei’s Tai Tzu Ying tomorrow. Defending champion Nozomi Okuhara, having missed the Hong Kong Open, will not have sufficient points to qualify. Nehwal once again runs into Thailand’s Porntip Buranaprasertsuk a week after losing to her in China. Sato, who is in the same quarter, has a relatively easier first round, while Sindhu looks likely to run into Korea’s Sung Ji Hyun in the second round. If she crosses that hurdle she would be favourite to make the final.

As in Women’s Singles, there is only a single spot available in Women’s Doubles. China’s Chen Qingchen/Jia Yifan, Bulgaria’s Gabriela Stoeva/Stefani Stoeva and Malaysia’s Vivian Hoo/Woon Khe Wei are in contention.

The Stoevas have drawn Olympic champions Misaki Matsutomo/Ayaka Takahashi in the opening round, while Chen/Jia will be wary of a repeat upset by Japan’s Shiho Tanaka/Koharu Yonemoto, who surprised them in China. Vivian/Woon have a potential second round with Danes Christinna Pedersen/Kamilla Rytter Juhl.