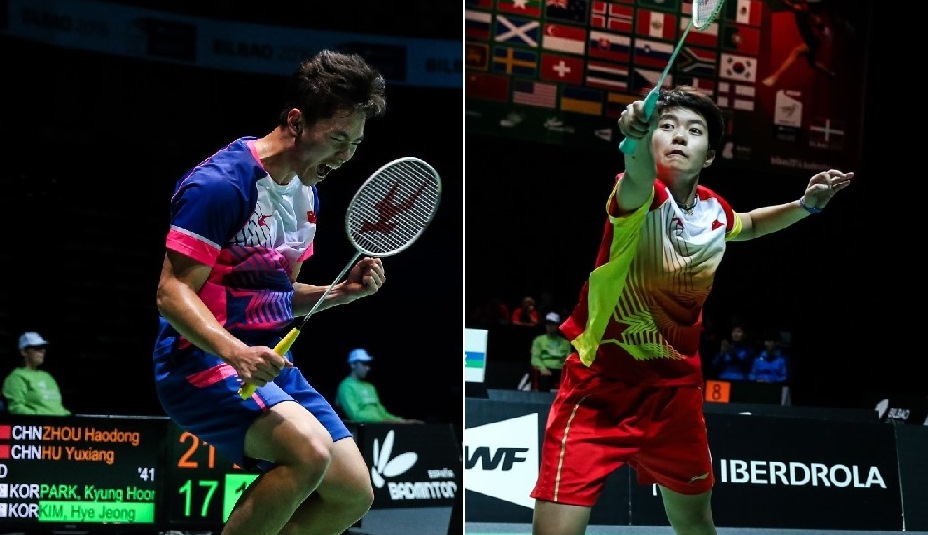 China’s Du Yue and Zhou Haodong put themselves in line for double gold at this year’s IBERDROLA BWF World Junior Championships 2016, advancing to two finals each in today’s semi-finals at Bilbao Arena.

In fact, the badminton powerhouse has the potential to sweep the prestigious tournament as Chinese players will contest all of the title-deciding matches tomorrow as the curtains fall on the two-week championships in Spain. Were China to achieve that it would cap a remarkable fortnight during which they also retained the Suhandinata Cup – the BWF World Junior Mixed Team Championship – last Sunday.

However, in the case of Du and Zhou, only one will be able to walk away with two titles as the jovial team-mates will be across the net from each other in the all-China showdown for Mixed Doubles supremacy.  Du (featured image: right) will partner He Jiting – with whom she comfortably defeated Malaysia’s Chen Tang Jie/Toh Ee Wei in today’s semi-finals (21-14 21-11) – while Zhou (featured image: left) has Hu Yuxiang for company. The latter withstood a sterner test from Korean rivals, Park Kyung Hoon/Kim Hye Jeong, but came through 21-17 21-18.

Asked if they will have a friendly bet about the match, Du said “it’s the boys in the team who do that sort of thing to boast to each other” but modestly conceded that if she wins both Mixed Doubles and Women’s Doubles tomorrow she would outshine her male counterparts. 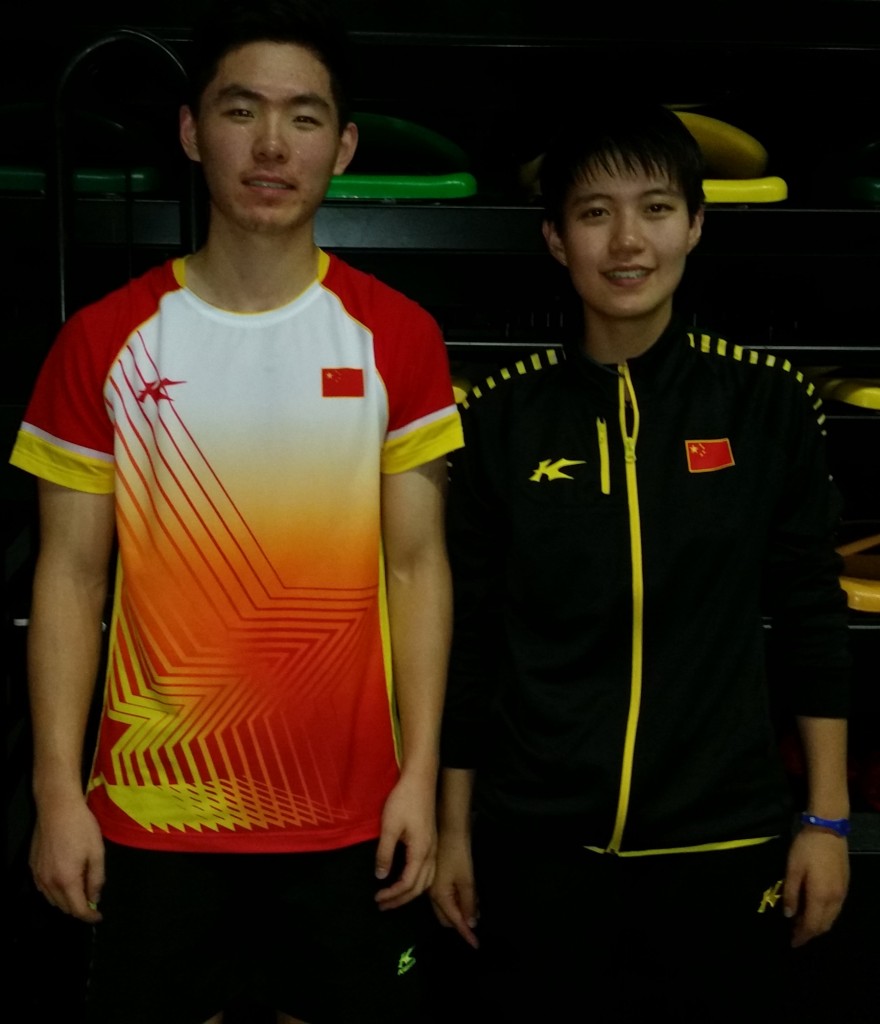 “Of course not,” declared Zhou laughing when asked if he would LET Du win in Mixed Doubles.

“I want to win Mixed Doubles also but Men’s Doubles is more important because we will be playing a foreign team.”

Top-seeded Zhou and Han Chengkai will be seeking to avenge China’s quarter-final and semi-final losses to Lee Hong Sub and Lim Su Min. For the second successive day, the unseeded Koreans courageously outplayed China, reaching the Men’s Doubles finale with a tension-filled 21-15 17-21 22-20 victory over Fan Qiuyue/Ren Xiangyu. Zhou and Han booked their spot in the final with a 21-15 21-12 rout of Thailand’s Pakin Kuna-Anuvit and Natthapat Trinkajee.

“Tomorrow we will give all we have left. It’s our last year as juniors and we want to finish on a high,” said a buoyant Lee, again stressing the importance of trusting his partner in the thick of intense battle.

Du’s path to two gold medals also takes her through Women’s Doubles where she and Xu Ya will come up against Japan’s Sayaka Hobara/Nami Matsuyama. The Chinese barely broke a sweat against Korea’s Kim connection – Ga Eun and Hyang Im; cruising through 21-15 21-8. The Japanese encountered a little more stubbornness from Indonesian first-time partners, Yulfira Barkah/Jauza Fadhila Sugiarto. Still tired after their 85-minute quarter-final, the Indonesians succumbed 21-14 21-13.

“The second game was a bit tougher but we are happy to be in the final. We think we have a chance of winning tomorrow,” said Matsuyama. 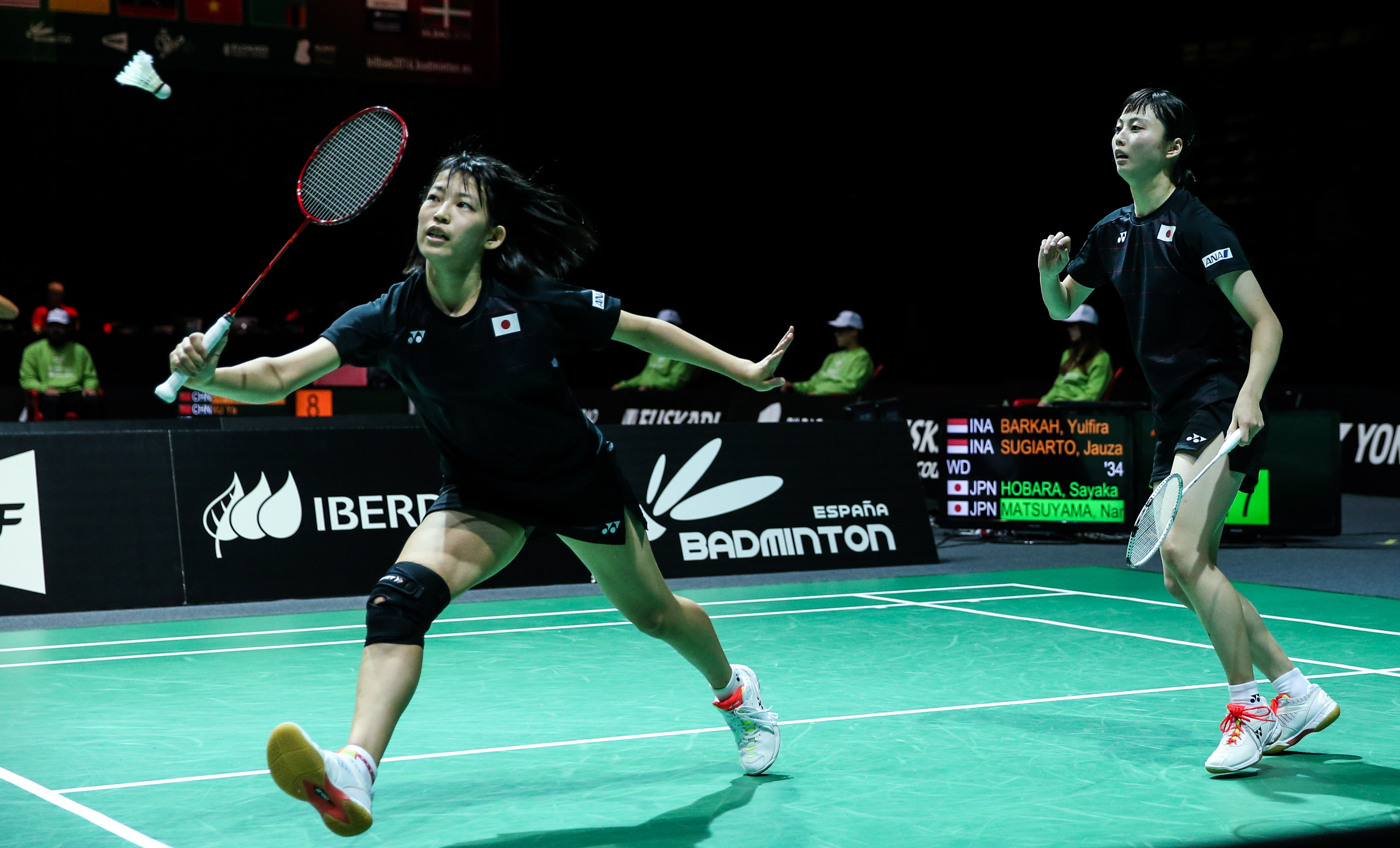 Meanwhile, Thailand endured mixed fortunes in the singles semi-finals with Pornpawee Chochuwong coming good versus Natsuki Oie to reach the Women’s Singles showpiece while her team-mate, Kantaphon Wangcharoen, was blitzed 21-9 21-13 in an error-strewn outing versus China Sun Feixiang. The Men’s Singles top seed could not cope with the power and speed of the No.5 seed who confidently stated “I think I am the best player here and I hope to prove that in the final”.

Sun will be up against Indonesia’s Chico Aura Dwi Wardoyo who savoured his first triumph in three matches versus Lee Zii Jia. The Malaysian was inconsolable as he contemplated his crucial mistakes, particularly at 18-16 up in the second game, only to see his rival flash to the finish line with five quick points: 21-19 21-18 to Wardoyo. 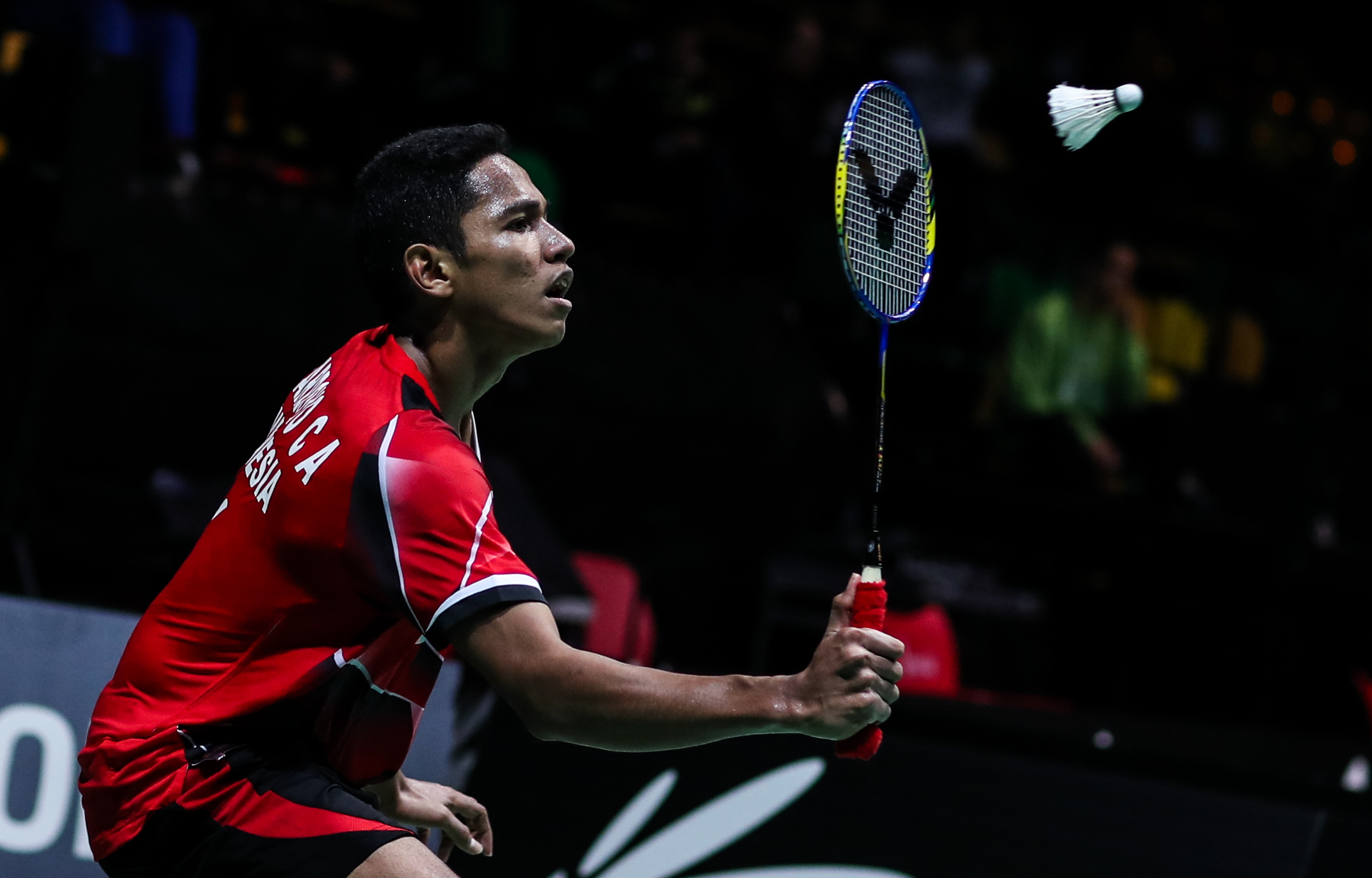 “I am proud to be the only Indonesian to reach the finals. I analysed Lee’s game with my coaches and I was prepared. I tried to keep the shuttle in the front court and to get in my attacks first,” explained the winner.

Chochuwong, who faces China’s Chen Yufei for the Women’s Singles championship, will be bolstered by her strong semi-final showing; resisting six game points in the opening game and rebounding from 2-8 and 14-17 down in the second game against Oie. Using her cross-court drive to telling effect, the 18-year-old – who dreams of following in her compatriot Ratchanok Intanon’s footsteps – shrieked in delight as Oie’s shuttle sailed wide on her second match point (27-25 21-19).

Chen, who has been one of the class acts of this tournament, gave a relaxed 21-12 21-17 performance against Korea’s Kim Ga Eun who exited the World Juniors with two bronze medals. 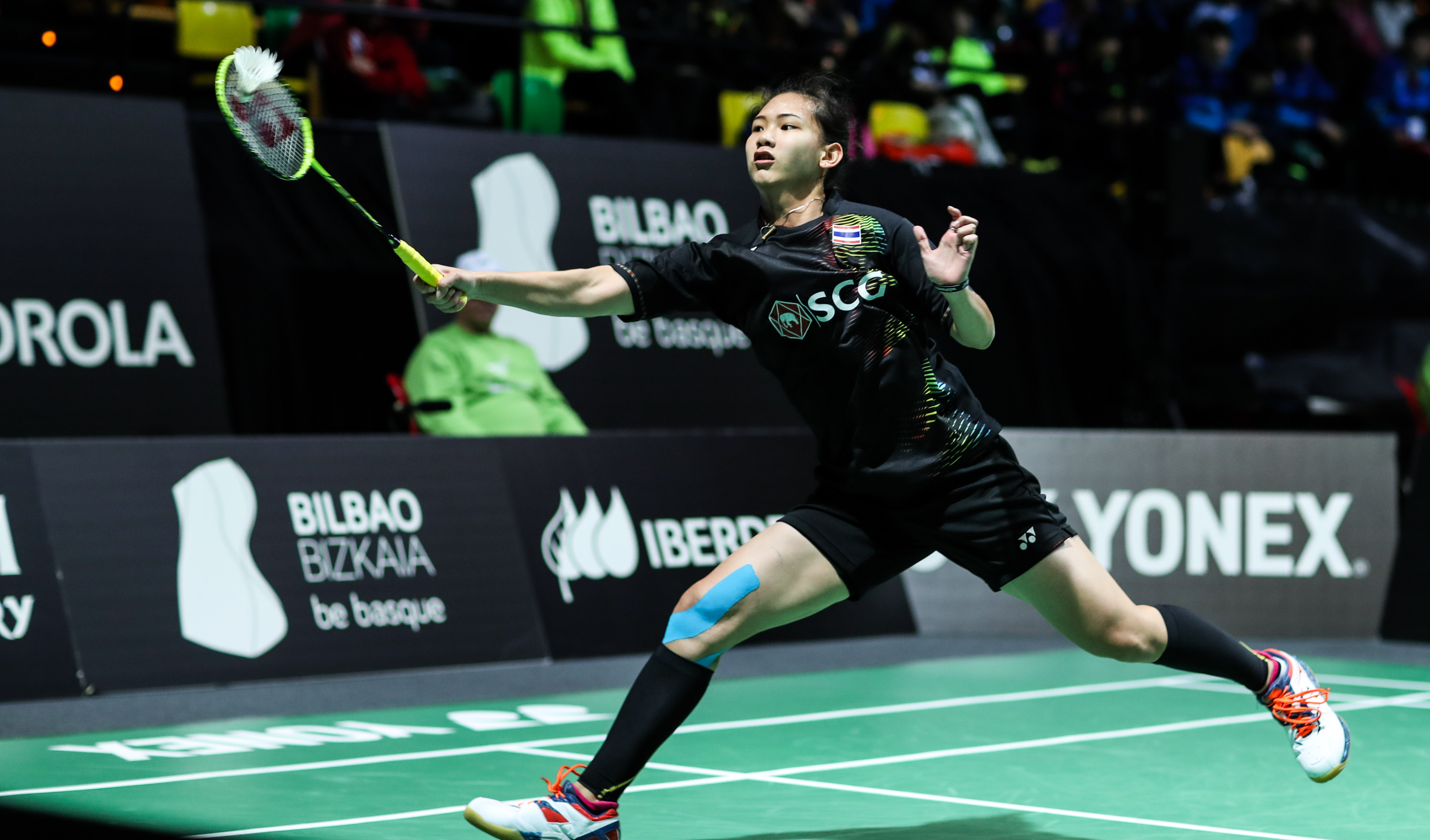