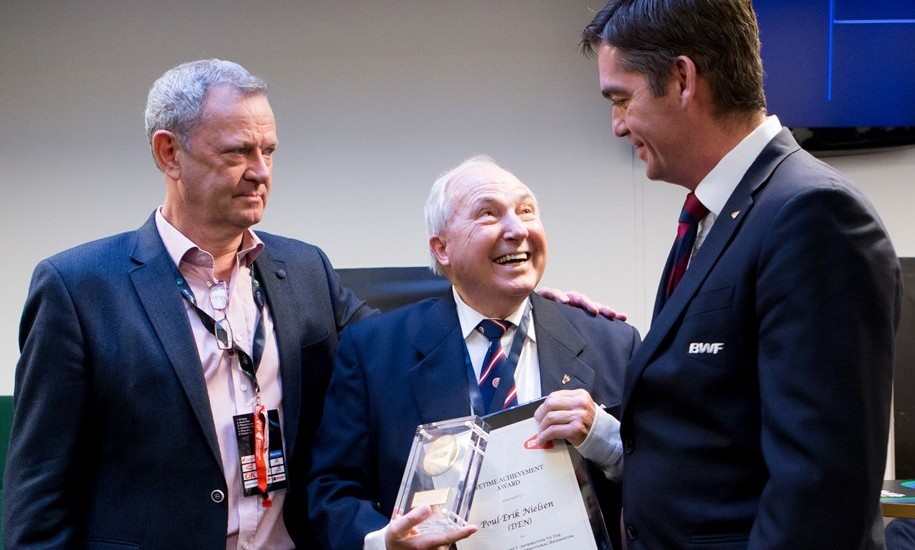 The visionary behind badminton’s global development thrust is thrilled with the manner in which the sport continues to blaze a global trail.

Speaking at a recent ceremony in his honour, Poul-Erik Nielsen expressed amazement that Badminton World Federation boasts 185 member associations and a robust development programme – Shuttle Time – which has been implemented in more than 100 countries. 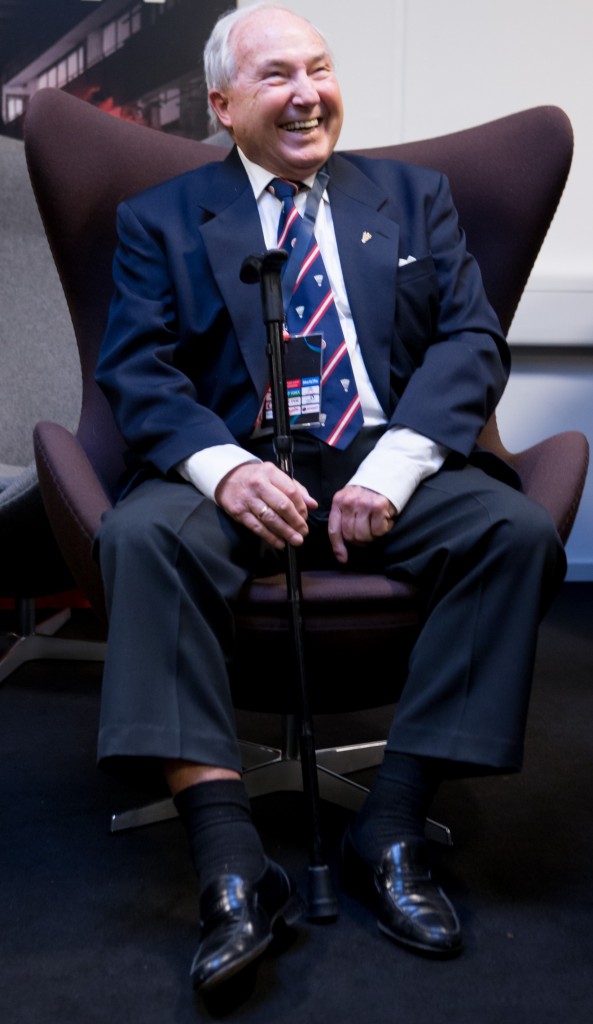 “It’s fantastic that badminton is worldwide. When I see how many tournaments there are and how it is developing, I am so pleased. I watch as much as I can and I like to keep track of Denmark of course,” said the 85-year-old who introduced a Development Committee during his two-year stint leading the International Badminton Federation (IBF).

Nielsen, who was elected to the IBF Council in 1974, served as Chairman of the Rules and Laws Committee in 1976 before becoming Vice-President in 1979. The Dane was deeply involved in the promotion and development of badminton in the Americas and Africa where badminton was still in its infancy. In August 1984, he became the 13th IBF President and one of his first initiatives was a pivotal decision “to assist the sport in younger and smaller member associations with coach education and equipment support” through the establishment of a Development Committee which is today an integral part of BWF’s structure, overseeing wide-ranging programmes to enhance badminton globally.

His presidency (1984-86) was also marked by another signature moment in badminton’s history as Nielsen “received the Olympic Flag as recognition of badminton being approved as an Olympic sport for the first time at the Barcelona 1992 Olympic Games”. Additionally, during the IBF split from 1976 to 1981, Nielsen – a lawyer by profession – used his legal background to create feasible compromises in the critical re-unification process.

For his outstanding service to badminton – a sport which he played until age 78 – Nielsen was honoured with a BWF Lifetime Achievement award last year. Now living in Spain, he returned to his native Denmark last month to accept the accolade from his namesake, BWF President Poul-Erik Høyer, during the Yonex Denmark Open which is part of the MetLife BWF World Superseries tour.

“Thank you to the BWF for this lovely award and to Rene – and Badminton Denmark – for those very kind words,” said an emotional Nielsen, following the reading of a citation by Badminton Denmark President René Toft. 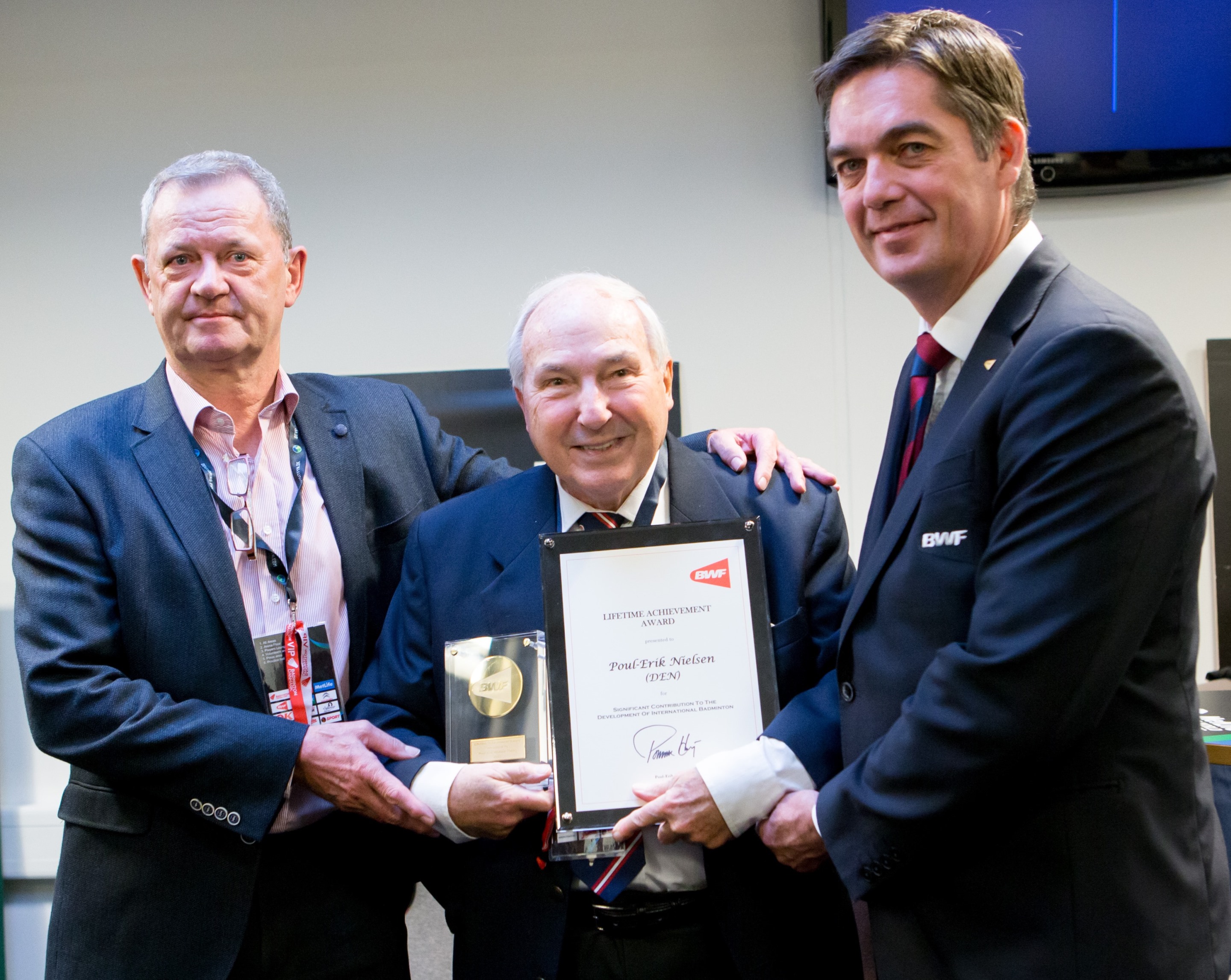 Revered as one of his country’s best doubles players in the 1950s and 1960s, the three-time All England champion shed tears as he shared his joy at Denmark’s Thomas Cup heroics this year; achieving what he and his team-mates narrowly failed to do in 1964 when they lost the final of the Men’s World Team Championship 4-5 to Indonesia in Tokyo, Japan.

“It’s 52 years late but I am so happy, so very happy. It was great for Denmark. I love that it’s a team event with so many players having a part. They had a great spirit. It was wonderful to watch it,” he said, his voice breaking as he recalled the history-making feat. 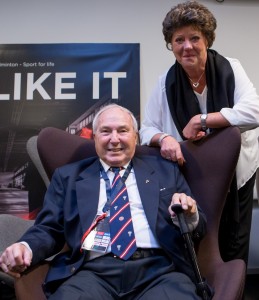 While naturally partial to his countrymen, this survivor of two strokes revealed his fondness for a certain iconic Chinese.

“Lin Dan is a fantastic player. He has been in the sport a long time and won a lot of big titles.”

Reflecting on the changes in badminton since his heyday, Nielsen marvelled at the sport’s tempo and speed nowadays, noting “it’s amazing to watch – the top players are so much faster”.

Smartly attired in the old IBF tie and humbly accepting congratulations from well-wishers, this affable personality – who also served as a national and continental administrator – was overjoyed at badminton’s strides and, not surprisingly, those of IBF’s successor organisation, the BWF.

“I can’t believe how many countries are playing badminton today. We couldn’t have imagined this when we were in IBF and we started helping smaller countries.

“I am very proud of IBF and what it has achieved. It has come a long.”

Indeed it has – and in no small measure due to the efforts of pioneers such as Poul-Erik Nielsen.