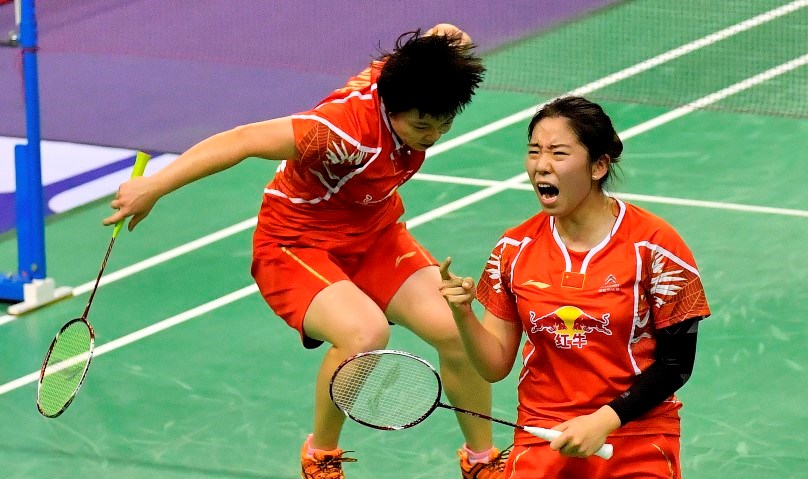 It was the rise of the underdogs today as Lee Hyun Il and Beiwen Zhang powered into the Yonex French Open 2016 finals; his first World Superseries final since 2008 and her first-ever. A storyline that began and gained currency in Denmark last week grew to almost fabled proportions as Lee – an old hand at badminton – cruised into tomorrow’s Men’s Singles showdown at the expense of another junior rival. On the other side of the net, Ng Ka Long – a player still honing his skills though clearly talented – became the latest in a string of young hopefuls to fall at the 36-year-old’s feet: 21-17 21-17 in 39 minutes.

On the neighbouring court, a saga of a different kind was unfolding as badminton nomad, Zhang, blossomed from a quiet start to break down the imposing challenge of China’s Sun Yu; her 21-19 21-15 result representing triumph over not only her opponent, but also adversity.

“After I won the first game I was pretty excited but I couldn’t show it. In the second game, I was more confident and I kept trying to hit the four corners and save my energy, similar to yesterday,” said 26-year-old Zhang.

A Chinese native whose sporting journey has taken her through Singapore, Malaysia and Taiwan before her arrival in the USA, she has survived on the fringes of the top flight, occasionally derailing those above her in the rankings. Purpose and clarity of

thought were the hallmarks of Zhang’s success versus Sun as she worked around the six-foot Chinese with deft net shots and flicking the shuttle over Sun’s head to secure the first game.

Contemplating a showdown against another Chinese, He Bingjiao (who beat Korea’s Sung Ji Hyun), the unlikely finalist chuckled and said: “In Women’s Singles everybody is strong. Maybe it’s who is feeling better on the day. Maybe this is my opportunity.” Meanwhile, Lee delivered another master-class, dismantling Hong Kong’s leading player with an attractive blend of crafty technique and clinical attacks; his lithe, flowing movement mesmerising fans while his racket cracked down to secure point after point. A delicate drop brought him to the cusp of match point and, in short order, another wristy snap ended Ng’s toil. Cool and collected, as if he had expected to be here, the Korean veteran accepted the applause from a thick crowd that had murmured and whistled at his wizardry.

“The first game was tight but when I got a lead I seized the initiative. The second game was easier. In Denmark, I played a lot of matches with three games and that helped me get into good form. I am playing well now and I am going to leave it all on court tomorrow,” declared Lee who was applauded by Ng for his superior skills, stamina and ability to “read the court”. Added to this canvas was the continued resurgence of the durable Men’s Doubles partnership of Mathias Boe and Carsten Mogensen following the latter’s health scare early this season. Again it was a case of veterans outclassing a pair of “young ‘uns” in the form of their Danish compatriots, Anders Skaarup Rasmussen/Kim Astrup. Aged 36 and 33 respectively, Boe and Mogensen propelled into the final 21-19 21-17.

“It was a tough match today; a good match for this amazing crowd. We are delighted to reach another final in Paris and we are looking forward to tomorrow,” said Mogensen.

The Danes will confront Bodin Isara and Nipitphon Phuangphuapet who dramatically beat Angga Pratama and Ricky Karanda Suwardi for the second straight week. The Thai pair snatched the last five points of the third game to squeeze past the Indonesians, 21-18 17-21 21-19; a feat that was applauded by the entire arena including the Indonesian coach. Mixed Doubles title-holders, Ko Sung Hyun/Kim Ha Na remained on track to retain their crown, avenging last week’s loss to Denmark’s Joachim Fischer Nielsen/Christinna Pedersen, 21-18 21-19. The Koreans focused on eliminating the errors they made in Odense and going for quick kills. Zheng Siwei/Chen Qingchen are their opponents in the final, defeating their Chinese team-mates, Zhang Nan/Li Yinhui, in the other semi-final.

Chen will also star in the Women’s Doubles championship match. She and Jia Yifan (featured image) achieved something not many pairs have this year – to beat Japan’s Misaki Matsutomo and Ayaka Takahashi.

In an intriguing glimpse of a future rivalry, the Olympic champions looked destined for the final, ahead 15-11 in the second game, but the feisty Chinese – juniors a year ago – refused to give in and fought back doggedly to take the honours on their fifth game point while saving four match points. The momentum from that tussle carried into the decider and the animated teens duly prevailed 16-21 29-27 21-15 in 99 absorbing minutes.