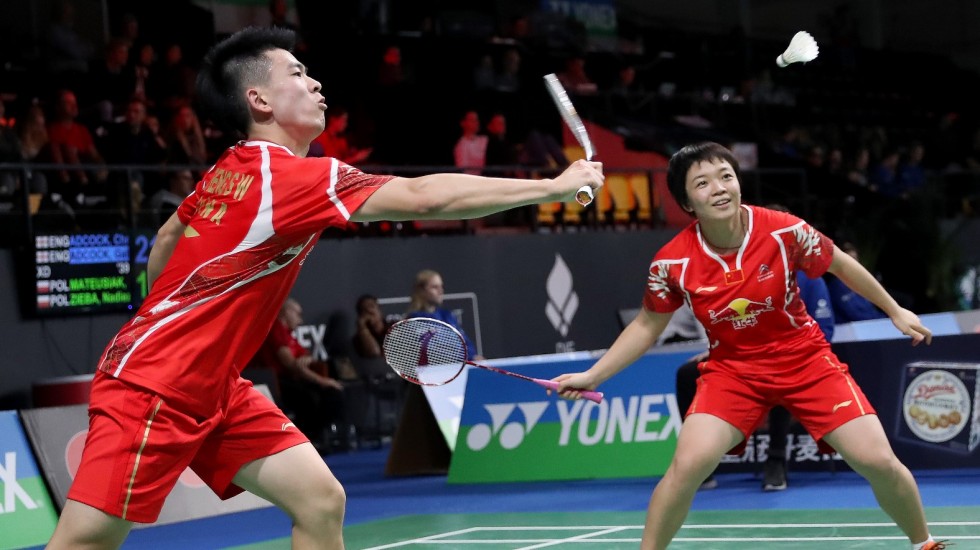 Unlike other opponents whom Marin eventually wore down during the week, the Japanese ‘pocket rocket’ was up to the challenge, matching the

Olympic champion in long, punishing rallies and finding gaps in the Spaniard’s arsenal which she was able to exploit, en route to a 21-15 19-21 21-18 triumph.

Children in stands seemed divided in their support, chanting both players’ names as the 82-minute drama unfolded at Odense Sports Park; Yamaguchi grabbing the ascendancy and Marin answering with her accustomed gritty fightback that forced a third game. Calling for her left thigh to be strapped before the decider, Marin continued the fierce exchanges with Yamaguchi, each producing moments of brilliance whether slicing short; smashing from deep or conjuring up some magic at net.

It was Yamaguchi, though, who romped clear in the dying stages, with five match points in her favour – and she almost needed all of them as a comfortable 20-15 became 20-18 with some careless errors. However, as Marin hit wide – by the narrowest of margins on instant review – Yamaguchi’s team-mates, entourage and fans erupted in celebration.

“I am very happy to beat the world No.1 and Olympic champion. I won in Korea and I want to win in Denmark,” declared the 19-year-old. 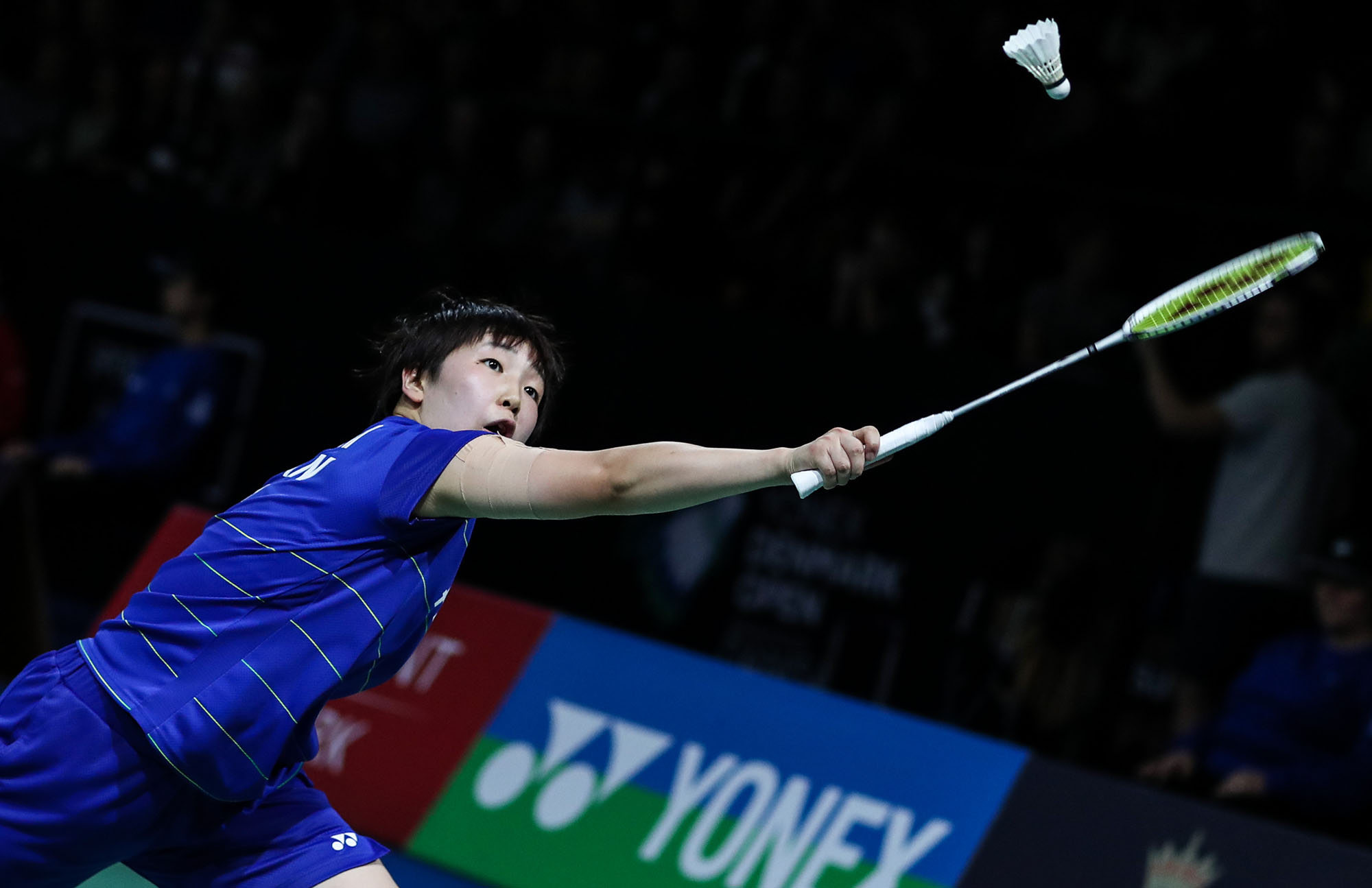 Marin, whose three previous matches this week spanned 53, 65 and 95 minutes respectively, conceded she was tired after yesterday’s bruising quarter-final with China’s Sun Yu.

“Yamaguchi is tough and I just tried to fight until the end. Now I want to recover and prepare for the French Open,” she said ahead of her title defence in Paris.

“Tai is a little tricky. I hope I can play well and give fans an enjoyable match,” said Yamaguchi.

Already victorious in Indonesia this season, 22-year-old Tai noted she is slowly getting back to form after the Olympic Games and is looking forward to a great challenge in the final. 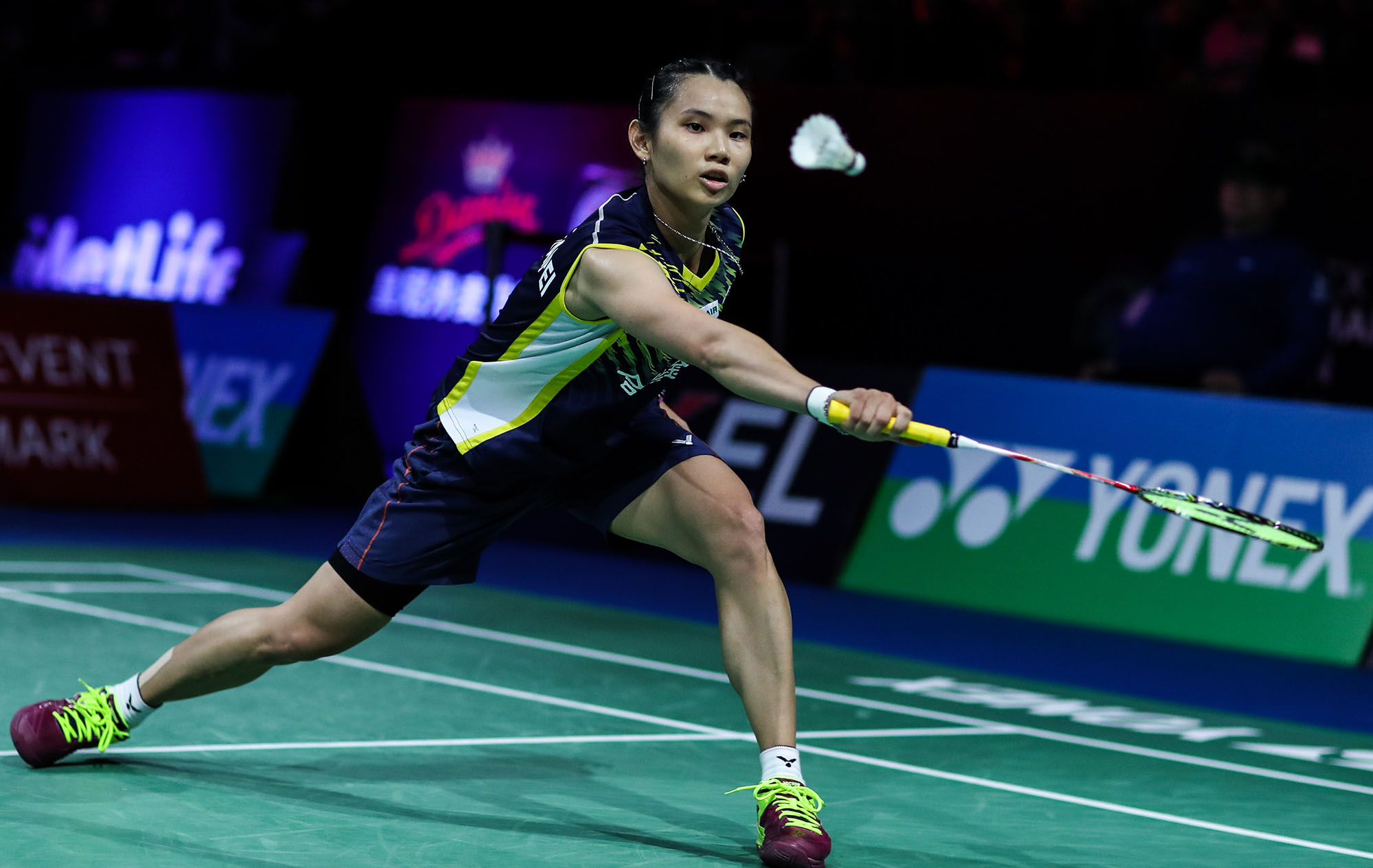 The veteran Mixed Doubles unit torpedoed European rivals, Chris and Gabby Adcock, to remain on track for their fourth success in the Denmark Open; having also won in 2008 and 2009.

As a third game loomed large, the Danes stunned the English husband-and-wife partnership with a seven-point blitz to steal the second game, and with it the match, as fans jumped to their feet in loud appreciation of the 21-16 21-18 win.

“I made some cheap errors that cost us and they caught up. You can’t afford to give them points like that. It’s disappointing because we know we canwin these matches but we will build on this in France,” said Gabby, having watched their 18-14 lead evaporate.

The Danes were thrilled to be in a Superseries final again; the first since they finished runners-up at the Yonex All England in March.

“We are pleased, though we struggled in parts of the game. We kept fighting and believed that our plan was the right one; to step forward and attack. They are good at it so we knew our strokes and all our decisions needed to be sharp,” explained Pedersen.

Regarding the Chinese young guns – Zheng Siwei and Chen Qingchen – they will face in the final, she noted: “They are playing well and it seems they are having fun. I look forward to playing them. We need to find our best game to win.”

Zheng and Chen (featured image) have taken the MetLife BWF World Superseries by storm, making a third straight final after winning in Japan and being runners-up in Korea. Today they beat team-mates, Lu Kai and Huang Yaqiong, 21-19 22-20. 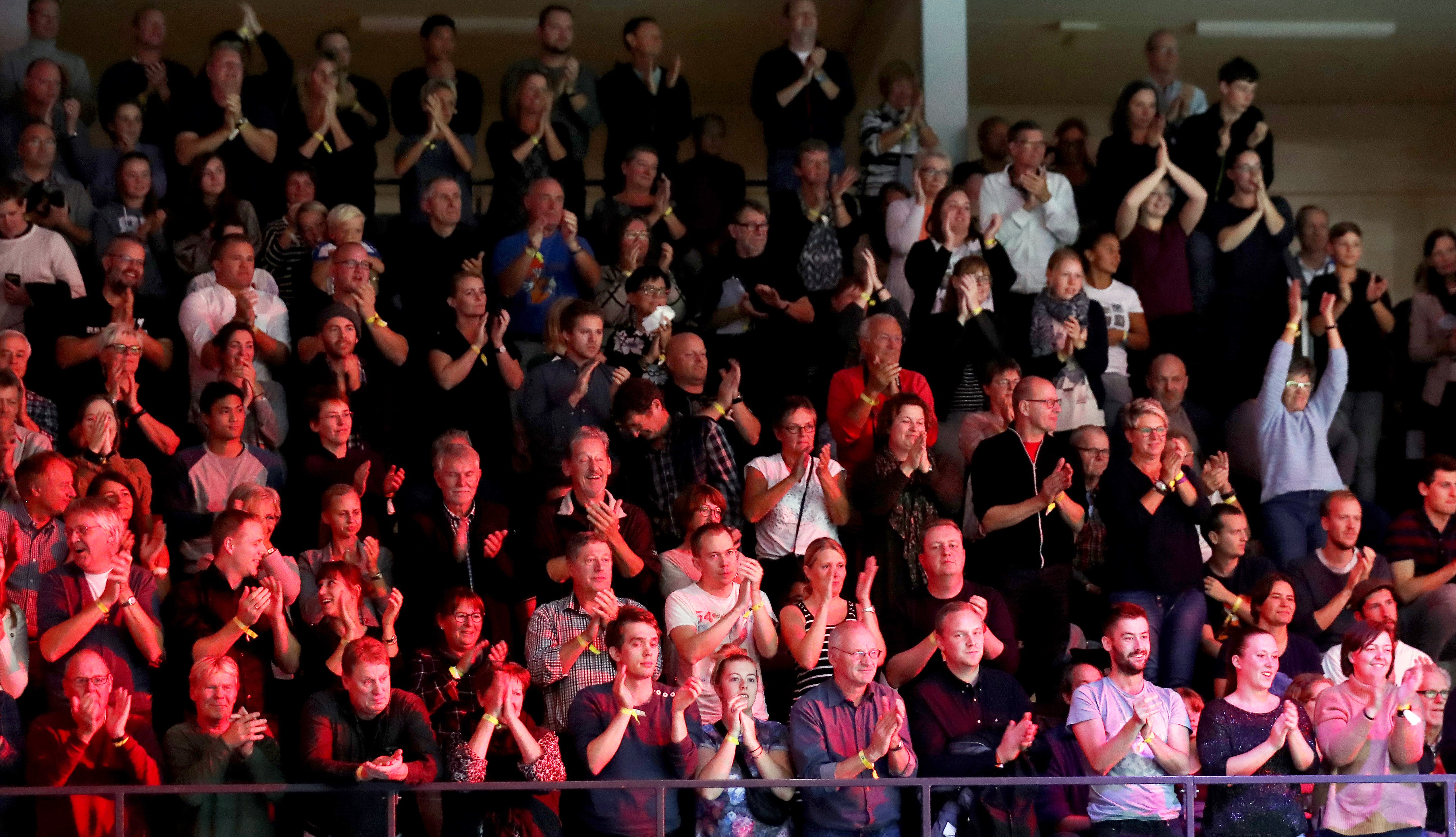 The pair dismissed Indonesia’s Angga Pratama/Ricky Karanda Suwardi, 21-11 21-18, and will meet Goh V Shem/Tan Wee Kiong for the title. The Malaysians came from a game down to beat Denmark’s Mathias Boe/Carsten Mogensen, 20-22 21-15 21-11.

Thai King Bhumibol Adulyadej, who died last week, was a great badminton patron who supported the sport’s development in his nation.

“This is a big chance to win a Superseries Premier and I will try to relax and play well,” said Son.

Puttita Supajirakul and Sapsiree Taerattanachai were unable to make it three in a row for Thailand, losing their semi-final to Olympic Women’s Doubles gold medallists, Misaki Matsutomo/Ayaka Takahashi (21-17 21-11). The Japanese will be out to avenge last year’s second-round defeat in Denmark when they meet reigning champions, Jung Kyung Eun/Shin Seung Chan of Korea, in the final. 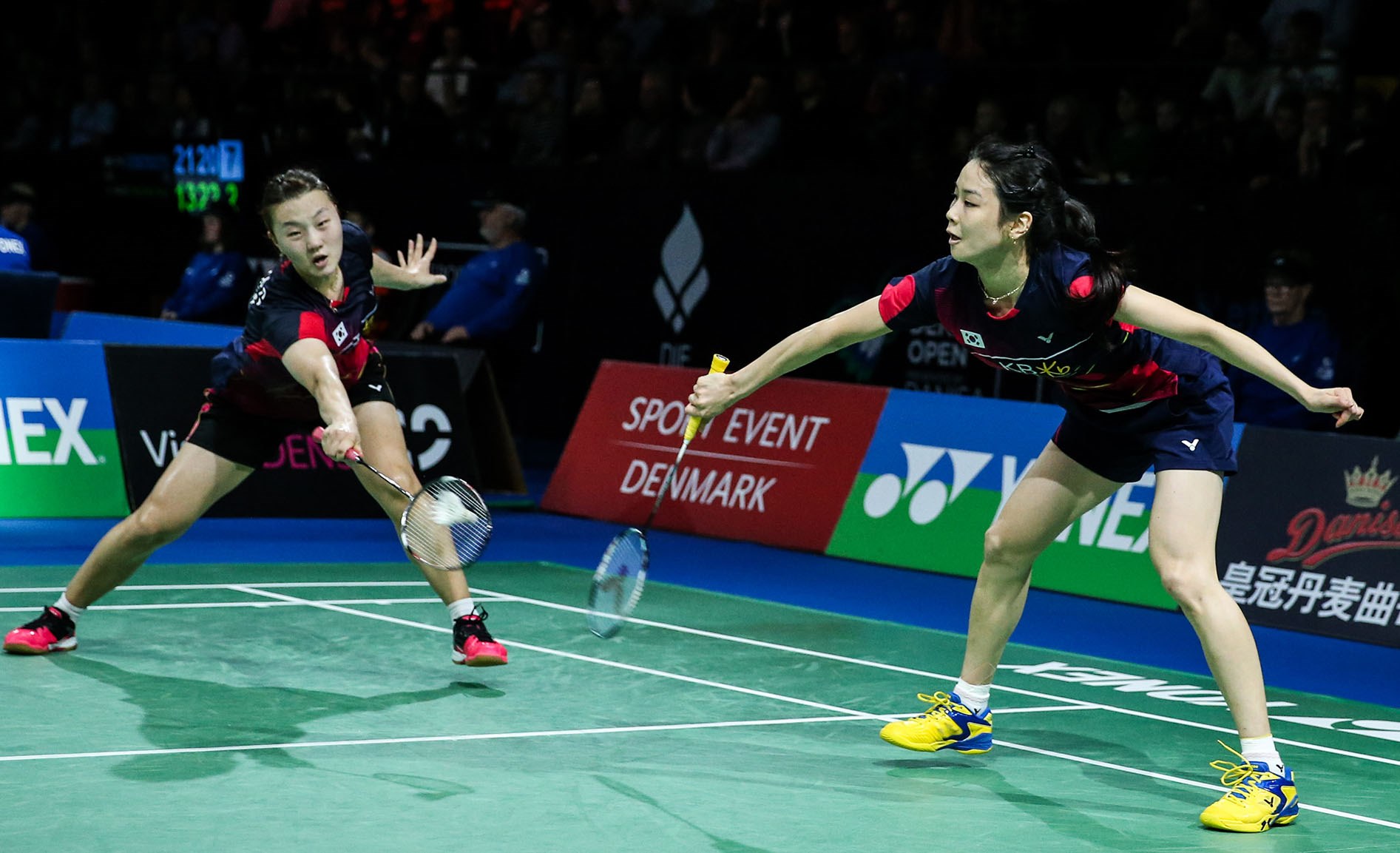