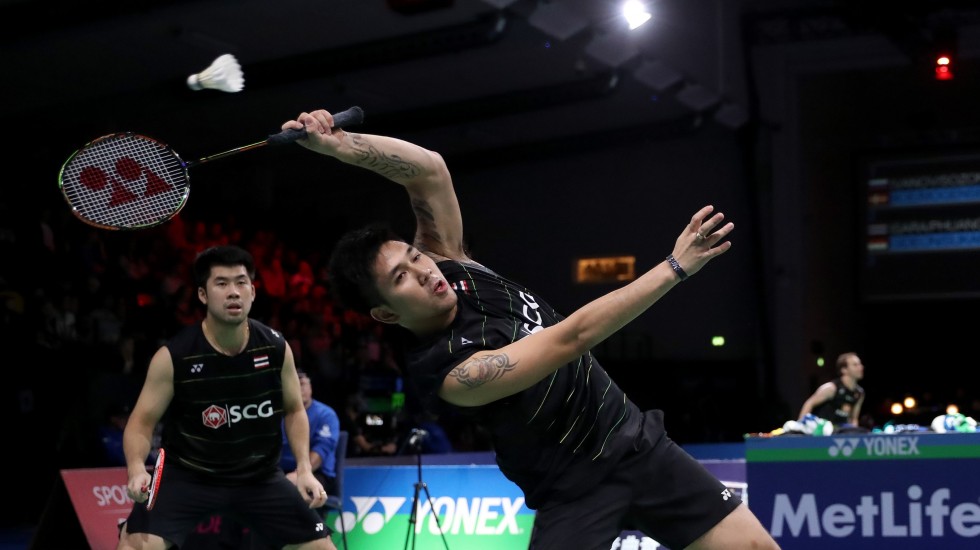 A consistent display saw Leverdez snatch the first game while Lee struggled to find his range. Again, the Frenchman found himself ahead in the second game and earned two match points, but errors cost him dearly and forced a decider. Each time Lee crept ahead two or three points, Leverdez would reel him back in, thanks as much to his gritty determination as to the Malaysian’s mistakes.

When two more chances to clinch this absorbing quarter-final came Leverdez’s way, he was determined not to squander them and a mixture of relief and joy engulfed him as Lee – who turned 34 today – failed to return his opponent’s smash.

“I was disappointed to lose the second game. I am a bit surprised I won the third game as he’s very fit…but he made some mistakes and I capitalised on those. He was rushing to get points and I was patient and took my chances,” said the 30-year-old who won 21-17 20-22 21-19 in 77 minutes. 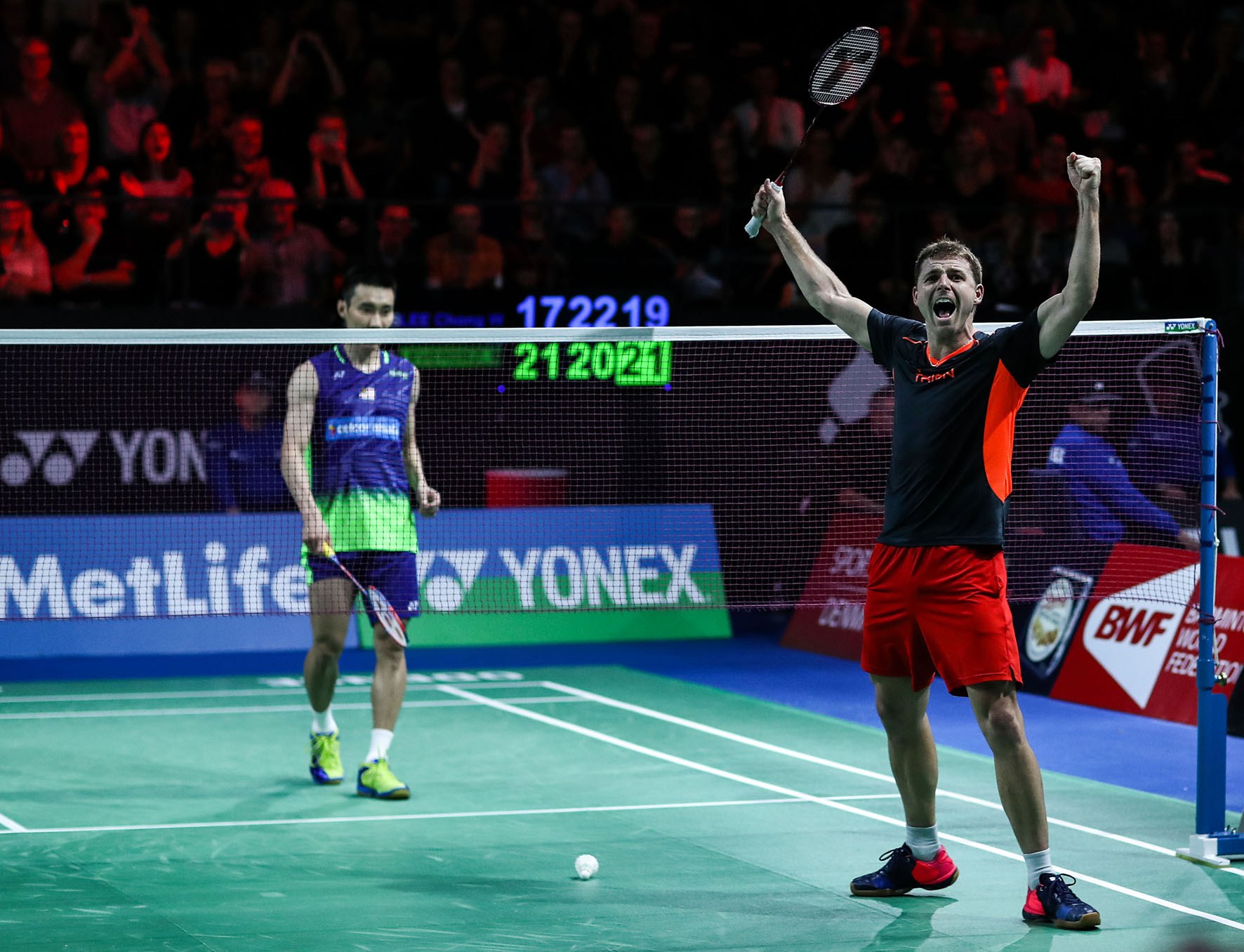 Lee, who was hunting his 45th Superseries title, admitted he was not at his best, adding he will look to bounce back in Paris next week.

Leverdez faces Thailand’s Tanongsak Saensomboonsuk for a place in the final. The latter survived a daring run by Danish teen, Anders Antonsen, winning 21-17 14-21 21-15. The other semi-final will be an all-Korean affair between Son Wan Ho and veteran Lee Hyun Il who again rebounded admirably (6-21 21-13 21-13) after losing the first game cheaply to Wong Wing Ki of Hong Kong.

“He was fast and powerful in the first game but I know how to conserve my energy and I did that,” said the 36-year-old. 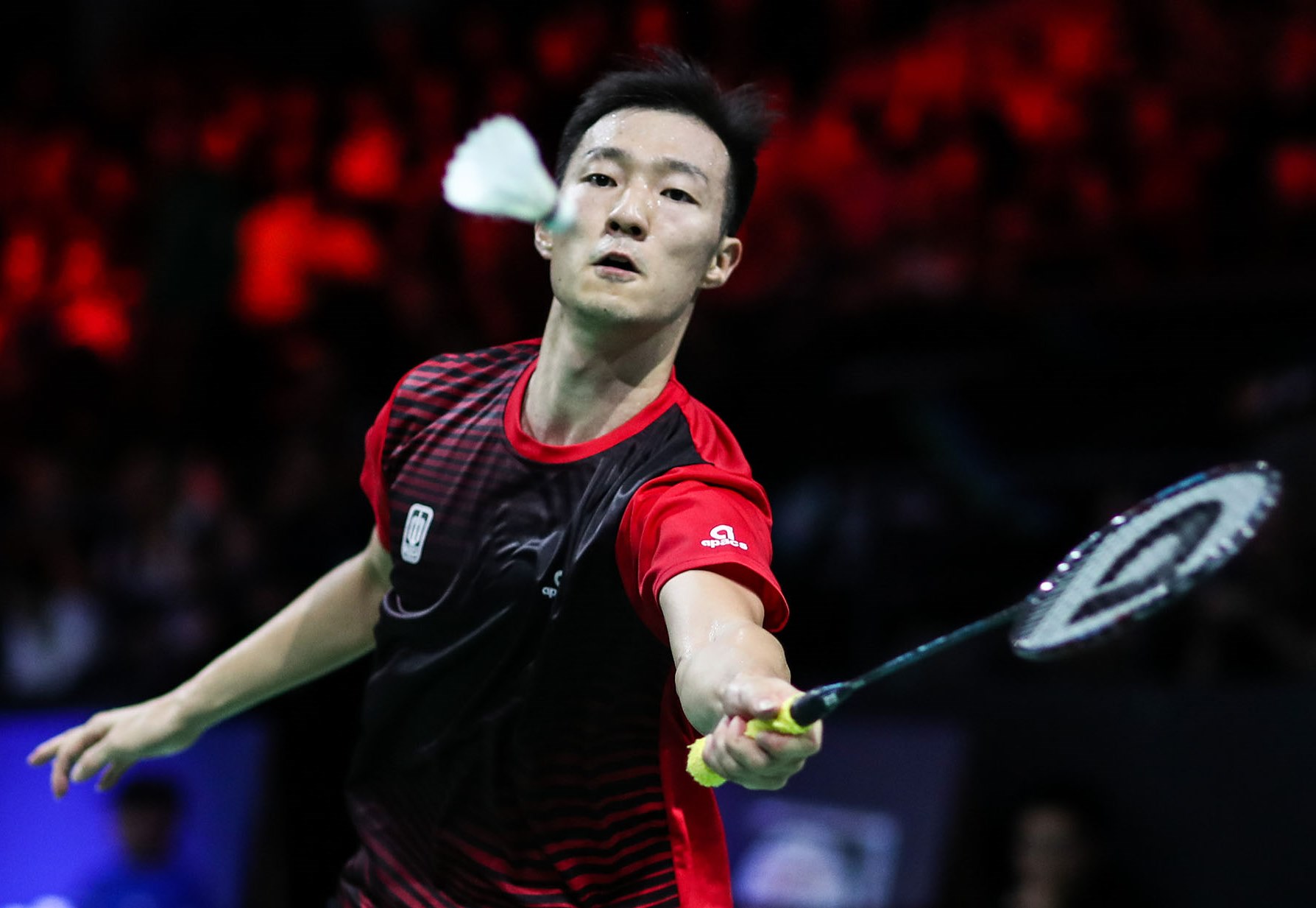 Carolina Marin proved why she is badminton’s Iron Lady, clawing back from eight points down in the third game and holding her nerve to deny Sun Yu in a see-saw thriller that gripped Odense Sports Park.

The Women’s Singles top seed and Olympic champion again triumphed in three games, producing her resilient best – including saving two match points in the decider – as her Chinese rival wilted under the combined pressure of the Spaniard’s relentless attack and the weight of the moment.

A tired effort into the net by the tall Chinese finally gave Marin victory: 21-19 16-21 27-25 in 95 hard-fought minutes. It was an outcome that, for most other players, would have seemed unlikely at 6-14 down in the third game. However, Marin has risen to fame on her ability to outlast opponents mentally – and the 22-year-old credited that aspect of her prowess again.

“It was very tough. The key in this match was the mental game – whoever had more energy and power and could show they wanted to win. That was important. I tried to keep calm and think positive, even when I was frustrated by my unforced errors,” said Marin.

Sun lamented her missed opportunity for a first success versus the trail-blazing world No.1, noting Marin’s greater experience in such situations as a key factor at the critical stages. 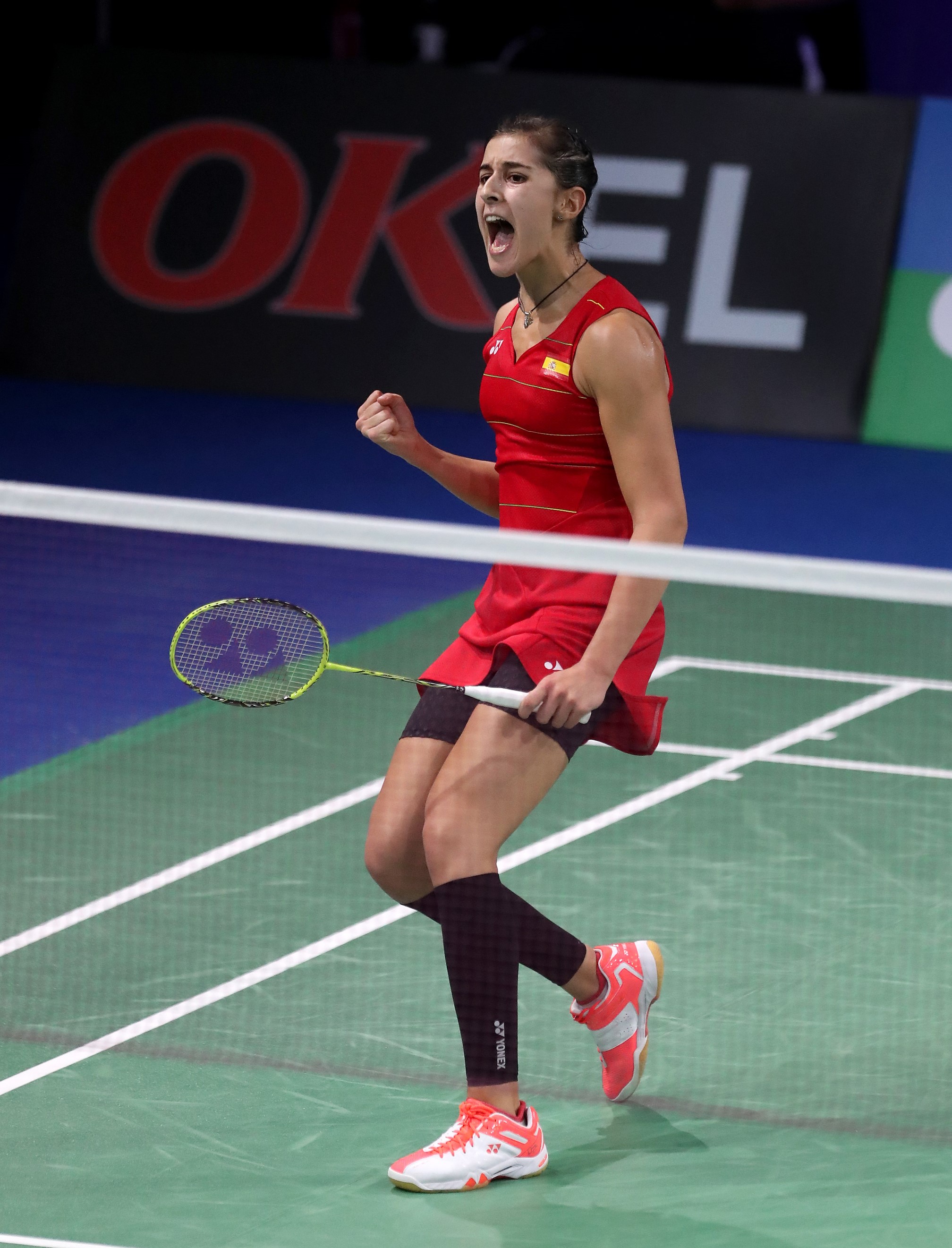 It was a superb day ‘at the office’ for Thailand as its players won all three quarter-finals in which they featured while notching some special milestones.

“It’s great to be in our first Superseries semi-final. We are more confident now, especially after winning the Thailand Open,” said 20-year-old Supajirakul.

She and her partner will clash with Olympic champions, Misaki Matsutomo/Ayaka Takahashi of Japan, for a place in the final. The other semi-final pits title-holders Jung Kyung Eun/Shin Seung Chan of Korea versus Nitya Krishinda Maheswari/Greysia Polii of Indonesia. 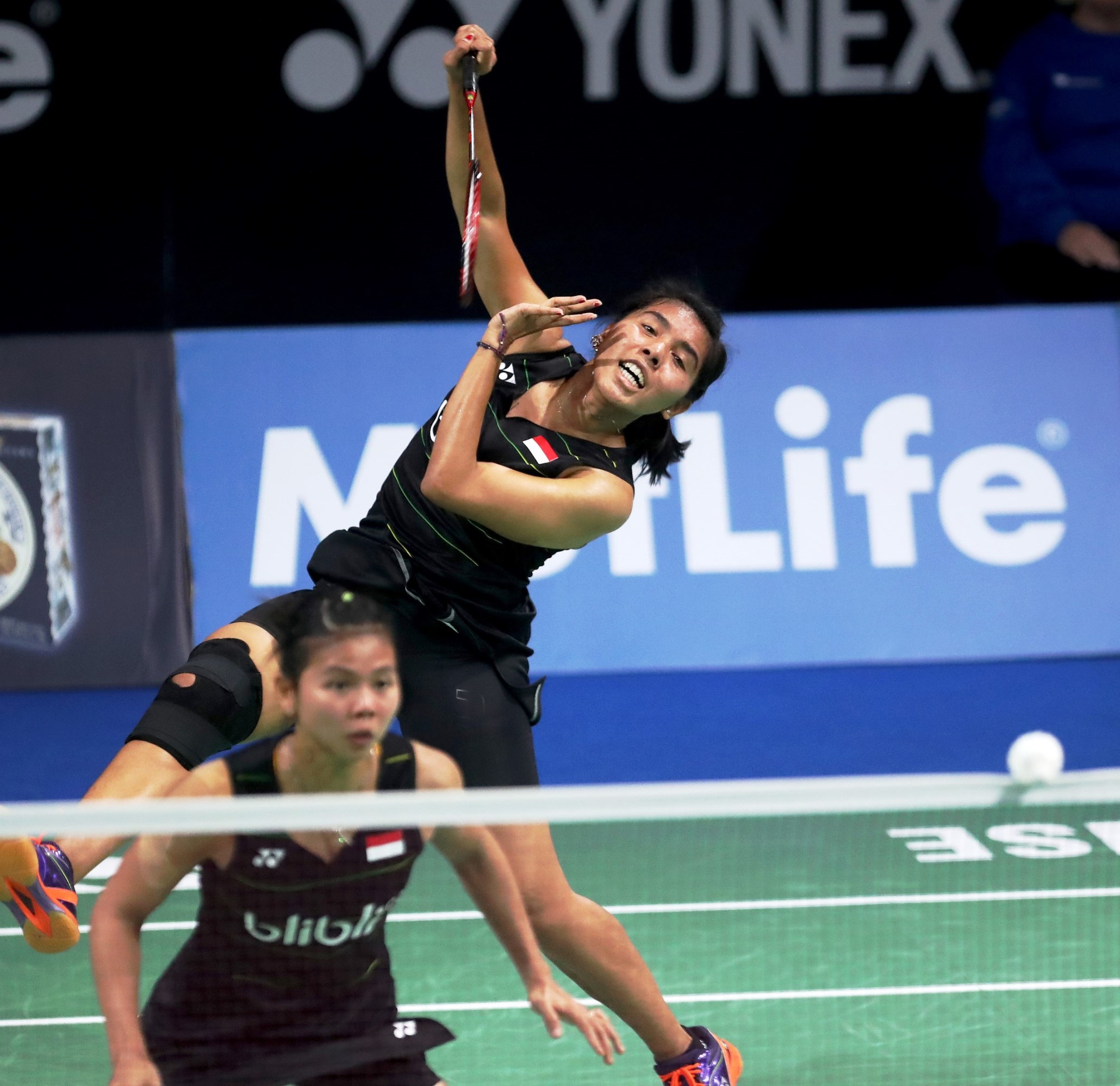 Denmark’s chances of hoisting silverware on Sunday rest with Mathias Boe/Carsten Mogensen in Men’s Doubles and Joachim Fischer Nielsen/Christinna Pedersen in Mixed Doubles. After near-disaster in the second round, the latter came out blazing against top seeds, Korea’s Ko Sung Hyun/Kim Ha Na, to prevail 21-13 21-18. They will tackle Chris and Gabby Adcock in the semi-finals. 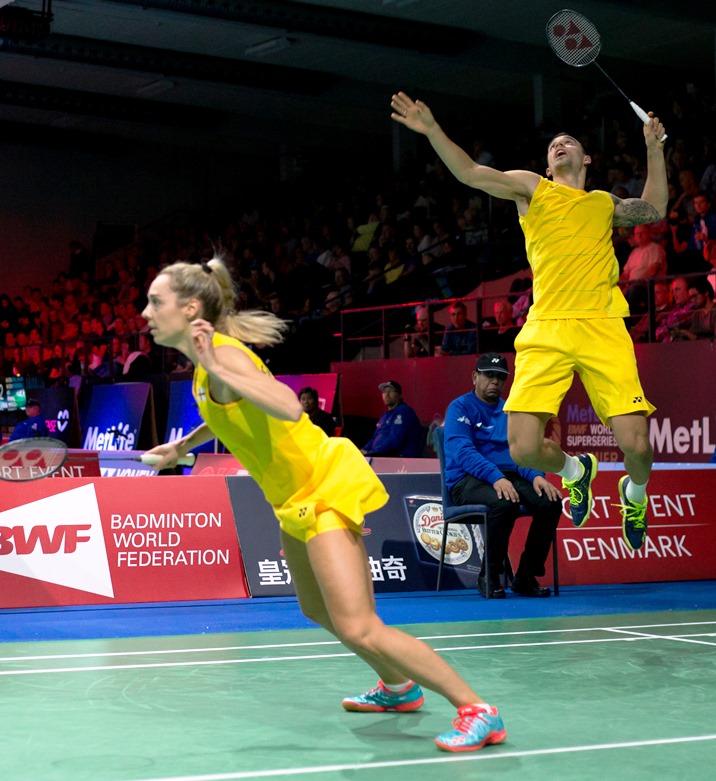 “We decided not to wait and see what they were going to do but to attack and play with a lot of speed from the start. This has been our best match for a long time and we are pleased to be in the semi-finals,” said Pedersen who later lost in Women’s Doubles with Kamilla Rytter Juhl.