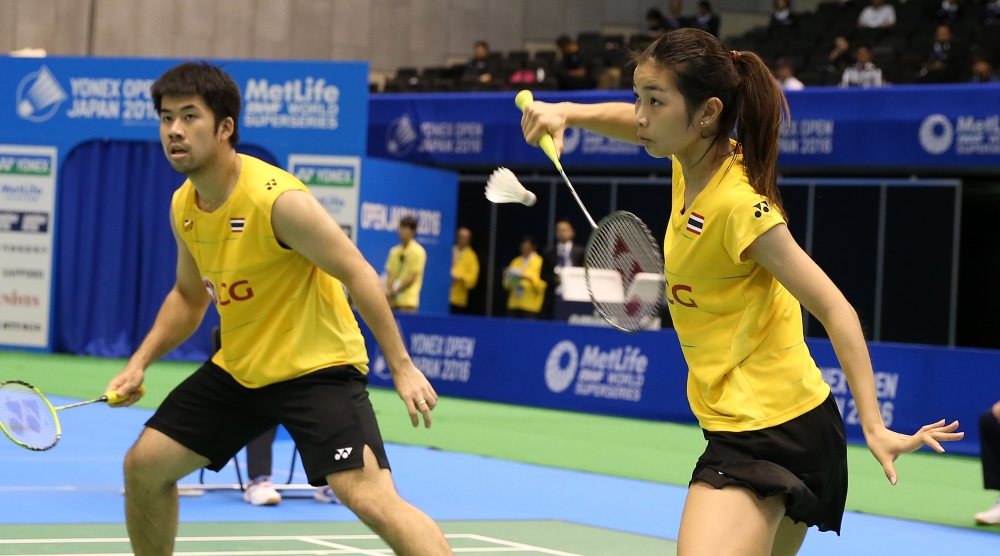 Thailand savoured a perfect Thursday at the Yonex Open Japan today, winning all their matches and clinching six quarter-finals places in four categories.

“I was quite tired from yesterday’s match (against Hong Kong’s Hu Yun), but today it wasn’t so bad,” said Phetpradab, who had come through two qualifying rounds. “This is my first Superseries quarter-finals and I’m very happy. Today I was very confident with my control at the net and tried to work my points from there.”

Jorgensen’s compatriot Viktor Axelsen overcame fierce resistance from India’s HS Prannoy in the second game and breasted the tape in straight games, 21-16 21-19. The Indian was unrelenting in his attack as he climbed back from 7-11 down to catch up at 14. An entertaining spell of badminton followed with several hard-fought exchanges; Axelsen gained the lead but Prannoy caught up once again with a flurry of jump smashes and had a sniff of the second game at 19-18. The Dane however tightened his game at the right moment, staying patient during a long rally on match point to finally seal his quarter-final spot.

“I think he played really well in the second game and I lost my focus a little bit,” said Axelsen. “I was tired mentally after the Olympics, but I got some rest; it’s time to set new goals. I will focus on this tournament and take it from there.” Japan’s Women’s Singles players continued to revel in the spotlight, with five local players – Nozomi Okuhara, Akane Yamaguchi, Ayumi Mine, Aya Ohori and Sayaka Takahashi – making the quarter-finals. The only exceptions were China’s He Bingjiao and Sun Yu and Thailand’s Intanon.

In the top quarter, Ayumi Mine overcame Kaori Imabeppu to book a spot against Aya Ohori, who survived a three-game encounter against Hong Kong’s Cheung Ngan Yi, 21-17 16-21 21-10. Chan/Goh were impressive in a 21-13 21-19 result over Dutch pair Jacco Arends/Selena Piek, and will next face Korea’s Kim Gi Jung/Shin Seung Chan.

“We did manage to practice despite all the felicitation programmes,” said Goh, speaking of the receptions the pair received for winning the silver in Rio. “It took time to re-adjust. I think we are carrying our confidence from Rio into this tournament. Of course there is more attention on us now, but we are trying not to pressure ourselves.”