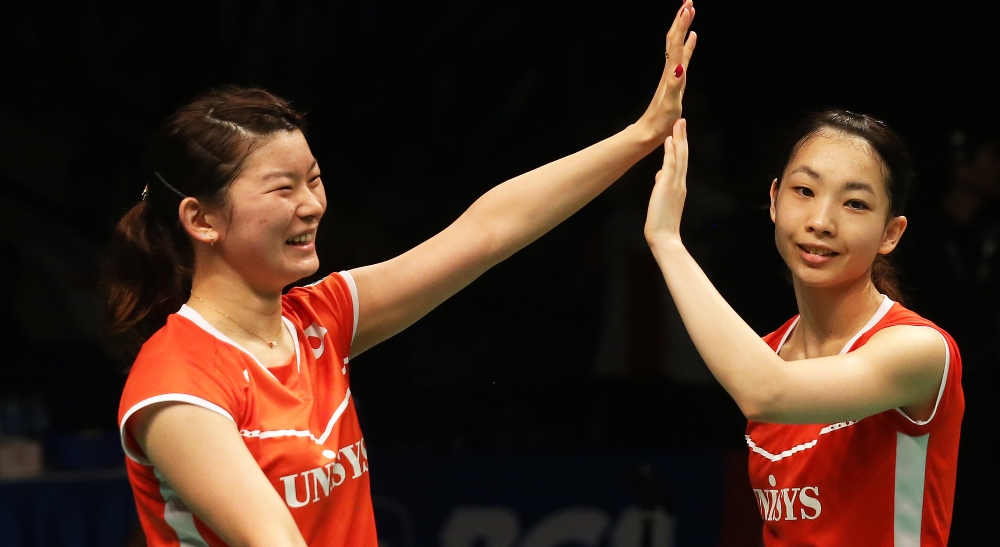 Japan dominate the top echelon of the Destination Dubai Rankings in Women’s Doubles, with three pairs making the top eight at the half-way stage of the MetLife BWF World Superseries season.

Naoko Fukuman/Kurumi Yonao and Shizuka Matsuo/Mami Naito follow in the footsteps of their illustrious compatriots Misaki Matsutomo/Ayaka Takahashi who are currently leading the standings.

Matsutomo and Takahashi (featured image) have been prolific this year, winning three World Superseries titles – Yonex All England, Yonex-Sunrise India Open and BCA Indonesia Open, apart from finishing runners-up at the OUE Singapore Open and making the quarter-finals of the Celcom Axiata Malaysia Open. They had to concede walkovers in Singapore and Australia; the only pair to have beaten them in a Superseries this year is China’s Tang Yuanting/Yu Yang, ranked No.2.

Tang/Yu were consistent, winning the title in Malaysia, and making the finals in England and Indonesia, apart from quarter-finals in Australia and India. Two pairs got the better of them on a few occasions – Matsutomo/Takahashi and Greysia Polii/Nitya Krishinda Maheswari. Indonesia’s Polii/Maheswari (No.3) had a strong early season despite their opening round loss at the All England. The Indonesians were semi-finalists in India and Australia, and surged to the Singapore Open title in between. They also wrote their names in the history books by featuring in the dramatic 161-minute thriller against Kurumi Yonao/Naoko Fukuman at the Badminton Asia Championships; the aftereffects of this ultramarathon were felt soon after, with Maheswari suffering an injury, but the Indonesians bounced back in Australia and appear well on course for their Rio campaign. Yonao/Fukuman started the year brightly, making the quarter-finals of the All England and the final of the India Open, which they lost to their compatriots Matsutomo/Takahashi. They went on to make history by featuring in the longest match ever; quarter-final placings in Singapore and Australia helped them to No.4 in the Destination Dubai Rankings.

Another pair that was impressive was Korea’s Jung Kyung Eun/Shin Seung Chan. Finalists in Malaysia and semi-finalists in Singapore, the Koreans finished the first half of the season at No.5 in the Destination Dubai Rankings.

The second Chinese pair in the top ten are Tang Jinhua/Huang Yaqiong, who vaulted five places to No.6 on the strength of quarter-final placings in Indonesia and Australia.

Shizuka Matsuo and Mami Naito stayed at No.7 despite early losses in Indonesia and Australia. The Japanese duo’s best performance came in Malaysia, where they knocked out defending champions Luo Ying/Luo Yu and World champions Tian Qing/Zhao Yunlei (both China) on their way to the semi-finals.

Tian/Zhao, ranked No.11, had a surprisingly poor season. The World champions’ best was a semi-final in Singapore; they also crashed out of the first round in Indonesia to Tiara Rosalia Nuraidah/Rizki Amelia Pradipta.

Korea’s Chang Ye Na/Lee So Hee, quarter-finalists in England, Malaysia and Australia, were at No.8, ahead of Denmark’s Christinna Pedersen/Kamilla Rytter Juhl and Netherlands’ Eefje Muskens/Selena Piek.

Danish pair Pedersen/Rytter Juhl started strongly with semi-finals in England and India, but then endured a rough patch, crashing out in the opening rounds of their next three Superseries. Muskens/Piek gained a morale-boosting entry to a Superseries semi-final for the first time in their career at the Indonesia Open, which helped them to No.10 in the Destination Dubai Rankings.

Dubai World Superseries Finals champions Luo Ying/Luo Yu, semi-finalists at the All England, weren’t seen in action after the Badminton Asia Championships, and their Destination Dubai Ranking plummeted to No.22. Six events remain for players and pairs to qualify in the top eight of the Destination Dubai Rankings for the season-ending finale, which will be held from December 14 to 18 at Hamdan Sports Complex.