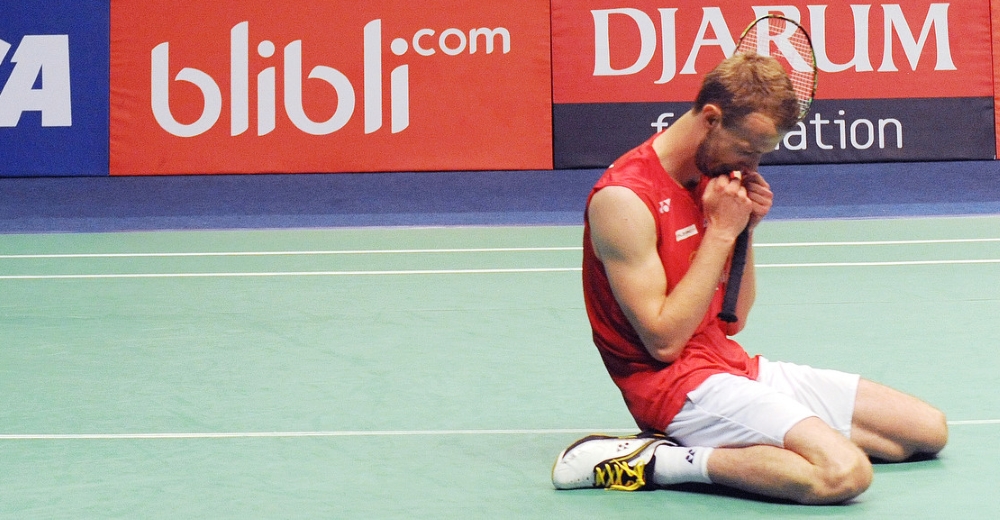 Carsten Mogensen authored a sensational return to competitive badminton as he and Mathias Boe beat an in-form Chinese pair to make the second round of the BCA Indonesia Open.

Mogensen, who had undergone surgery for a brain aneurysm in February and hasn’t played since, showed no sign of the tumult he’d been through or rust from months of being away from the sport. In an impeccable performance, the Danish pair outwitted Li Junhui and Liu Yuchen – silver medallists at the recent Badminton Asia Championships – 21-16 22-20. The Danes were razor-sharp from the beginning, defending astutely and controlling the ebb and flow of the game with their flicks and drives. Mogensen barely did a thing wrong all match; the Danes saw their opponents run down a 14-11 lead to have four game points at 20-16, but both Boe and Mogensen were unflappable. With Boe serving brilliantly under pressure, the Danes caught up and fired the winning point after another terrific rally when they returned a series of smashes from the Chinese.

“Of course it was extraordinary,” said Boe. “To be in the condition that he was in three months back, and to
come back here today, under difficult circumstances, it’s not an easy place here in Istora, the crowd is very noisy, there’s a lot of pressure on the court, a lot of drift…. His recovery has been amazing. He went directly to hospital from court. That shows his mental strength that not many people have, and to come back here… for badminton, Istora is a special place. And to win against a very skilful Chinese pair, the story couldn’t be written any better, and specially finishing off with that remarkable rally.

“Li and Liu play the Chinese style, they put a lot of pressure on the drive game. They move extremely fast on court, sometimes you get surprised that such tall people can move so fast and specially forward, and they push a lot. It’s not easy to play a pair that puts so much pressure on the front of the court. The trick is to see is if you can quickly block the shuttle and sometimes lift it over them so they have to move their big bodies around the court. And to see if you can control the serve and receiving.”

Boe and Mogensen’s victory made it a day of mixed fortunes for Denmark. Compatriots Jan O Jorgensen in singles and the doubles duo of Mads Pieler Kolding/Mads Conrad-Petersen had ensured their places in the second round, but there were also a few losses. Men’s Singles title favourite Viktor Axelsen retired in the third game against China’s Huang Yuxiang due to persistent cough; fellow-Dane Hans-Kristian Vittinghus fought a titanic battle against Wang Zhengming (also China), eventually going down 18-21 25-23 24-22. Two Men’s Doubles pairs – Mathias Christiansen/David Daugaard and Kasper Antonsen/Niclas Nohr joined Women’s Doubles compatriots Christinna Pedersen/Kamilla Rytter Juhl on the sidelines. Pedersen/Rytter Juhl had a healthy lead in the first game against China’s Tang Jinhua/Huang Yaqiong, but lost the game and eventually the match 23-21 14-21 21-10. There was plenty of interest in the Men’s Singles opener between Jorgensen and Anthony Ginting, since the Dane had beaten the Indonesian in the high-stakes battle in the Thomas Cup final.

Ginting roared off the blocks, and with the crowd getting in on the act, the Indonesian sailed on strong currents. With Ginting up 20-17 in the first, it looked like Jorgensen was in for a long hard scrap, but the Dane, wise with experience, capitalised on the openings he created and shot ahead. Virtually the same pattern replayed in the second game, with Ginting earning himself a lead at 19-15, only to blow it up with some inconsistent play at the end.

Jorgensen said his opponent’s lack of experience at this level had probably done him in: “I showed some experience, catching up from 17-20 in the first game. He was a bit stiff in the end and couldn’t control his shots. The same happened in the second game when I was trailing 15-19… I’m happy to get through in two sets.

“Anthony was more relaxed today. He’s a very attacking player, and the conditions favour him more than they did (at the Thomas Cup) in China. Last week he was under pressure too.

“Obviously it was very tricky today, there was a bit of build-up for this game because of last Sunday and he wanted a win on his home ground. He gave it a good try. He will be one for the future, that’s for sure.”

Meanwhile, Chinese great Lin Dan – who has never won the Indonesia Open – laboured to a three-game win over Malaysia’s Zulfadli Zulkiffli. Lin played at well below his normal pace, relying only on placement, but still had plenty in reserve when he closed it out 16-21 21-18 21-16.

“I’ve no idea why I haven’t won the Indonesia Open,” said Lin. “Right now, I’m not in my best condition. The goal is to do well in Rio.”

In Men’s Doubles action, home favourites Mohammad Ahsan and Hendra Setiawan once again ran into trouble from Hong Kong’s Or Chin Chung/Tang Chun Man. Having beaten the Indonesians at the Thomas Cup, the Hong Kong duo had their chances against the local favourites. Ahsan and Setiawan overturned a 11-17 deficit in the second game thanks to Tang’s shaky defence, and eventually made it home 23-21 25-23. “It was a tough match,” said Setiawan. “It’s been always been tight with Tang and Or. We learnt a few lessons from our last loss to them. They controlled things well in the second game by keeping the attack. It was a bit windy in there and that affected us.”

The BCA Indonesia Open is the fifth event in the 12-event strong MetLife BWF World Superseries circuit. Eight of the top players and pairs in the Destination Dubai Rankings will make it to the season-ending Dubai World Superseries Finals 2016 in December.