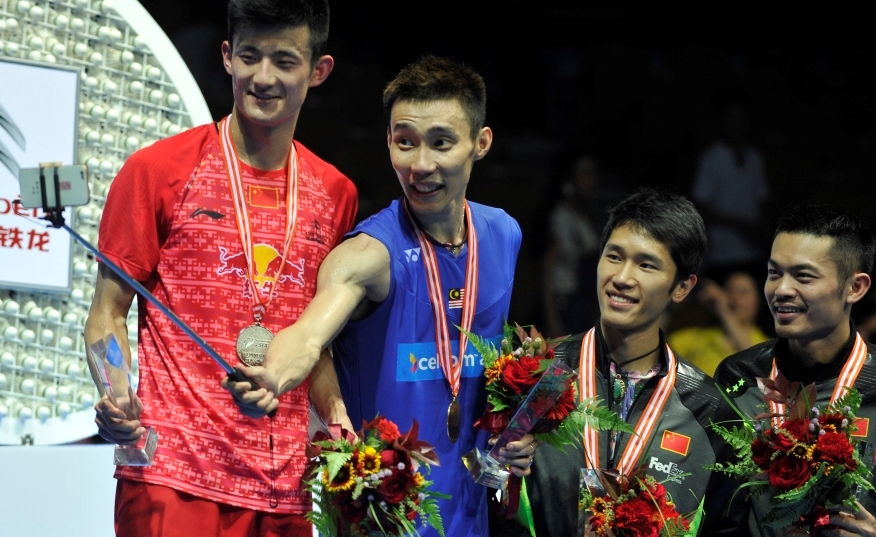 Malaysia’s Lee (featured image) was a picture of assurance all through his 82-minute Men’s Singles final against arch-rival Chen Long, cantering home in the end: 21-17 15-21 21-13. This was Lee’s fourth straight win over the two-time World champion.

As he has in recent times, Lee moved like a dream, appearing in all corners of the court to blunt Chen’s attack. The Chinese started well, but under the relentless pressure of an opponent who was always in the right place at the right time, his usually precise smashes began to miss their mark.

The positions were reversed in the second game, with Lee making a number of misjudgements at the baseline and getting his length wrong, but in the deciding game Lee was once again all poise, using soft strokes to keep Chen darting around, and putting in bursts of pace that helped him control the narrative. Overall, it was a display of grace, speed and judicious attack that Chen could not match on the day.

“The critical period was after the change of ends in the third game,” said Lee. “I scored a few quick points and that gave me a lot of confidence. I’ve beaten Chen four times in a row now, but that doesn’t mean I’m the favourite for the Olympics. A lot of things will count in Rio – your mindset, your physical ability. My career is close to its end and I want to enjoy the game as much as possible.”

Wang Gets Better of Li

Not since the 2014 Asian Games in September 2014 has Wang won a tournament of this level. Her only title since then has been the Yonex Open Chinese Taipei in July last year. Incidentally, in both these finals, she’d gotten the better of Li Xuerui.

The final, however, did not quite rise to the level expected. Both Li and Wang were circumspect and made a number of errors. It was only in the third game that the match came alive; Wang got an early lead and maintained her intensity, while Li couldn’t catch up. The win gave Wang her third Asian title. Misaki Matsutomo and Ayaka Takahashi had to be beaten by Naoko Fukuman and Kurumi Yonao for the latter to qualify to the Rio Olympics, but Matsutomo/Takahashi, showing no heed to extraneous considerations, were unmerciful. From the beginning, the top seeds were businesslike as they set about taking apart their opponents, who had had just a day to recover from the enormous physical effort of the semi-finals, in which they spent 161 minutes on court.

Still, Fukuman and Yonao fought all the way, but Takahashi and Matsutomo had enough in reserve to carve out a comfortable 21-13 21-15 victory. Both pairs were sombre post-match. Fukuman was tearful; Matsutomo and Takahashi acknowledged that having to beat their compatriots who were seeking a place in the Olympics was an awkward task.

“We knew they had to win to qualify for Rio,” Matsutomo said. “We aim to get the gold medal in Rio, so we want to win every match on the way. Nothing changes that. They are our teammates and we practice together. I want to get the gold for them too.”

Lee Yong Dae and Yoo Yeon Seong faced stiff resistance from Li Junhui and Liu Yuchen. The young Chinese pair, who’d beaten the Koreans in their only previous match at the Thaihot China Open, put the experienced Koreans under pressure with their fiery attack, taking the top seeds all the way in the second. Lee and Yoo however just about kept their noses ahead, and finally took the match 21-14 28-26 after seven of their match points were saved. Defending champions Tontowi Ahmad and Liliyana Natsir once again failed to find the answers to unsettle home pair Zhang Nan and Zhao Yunlei, who cruised to their eighth straight win over the Indonesians.

But for a brief period early in the match, when Ahmad and Natsir played with poise to gain a sufficient lead to take the game, the Indonesians were far too erratic to trouble the Chinese, while their opponents steadily got better. Zhao Yunlei had a standout match, firing smash winners, returning Ahmad’s biggest hits, and setting up the play for Zhang. Both Ahmad and Natsir, on the other hand, appeared to suffer a crisis of confidence, falling behind in intensity after the first game and never looking ready to capitalise on the few opportunities they created. The 16-21 21-9 21-17 result gave Zhang/Zhao their 13th win in 18 encounters against the Indonesians.