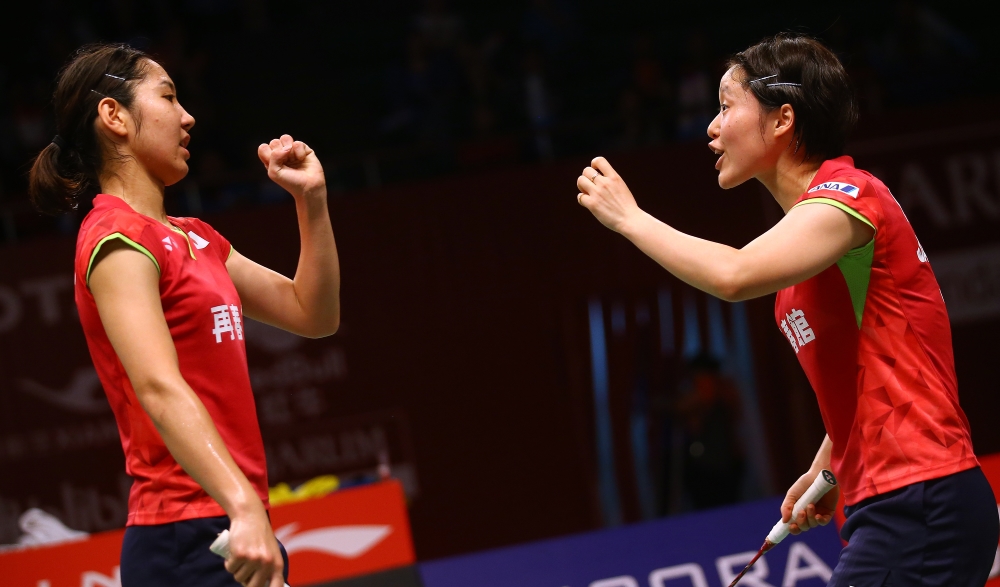 The Japanese duo, who are ranked No.9 but need to be within the top 8 to qualify as Japan’s second Women’s Doubles pair, outlasted Luo Ying and Luo Yu in a marathon match that went an incredible 1 hour 57 minutes, one of the longest matches ever. The 22-20 18-21 21-14 result gave them a lifeline for Rio, but they will need to win the semi-final to stay in contention. The pair that’s just ahead of Fukuman/Yonao, Korea’s Chang Ye Na/Lee So Hee, scored an unexpected win over No.4 seeds Tian Qing/Zhao Yunlei, ensuring that the Asian championships will be headed for a climactic finish.

Fukuman and Yonao (featured image) were engaged in an energy-sapping battle that promised to go well over two hours. Several exchanges lasted 40 or more strokes, with some going over 70. With both pairs solid in defence, and with the conditions preventing quick winners, they reconciled themselves to lobbing the shuttle back and forth and drawing the error.

It was the greater initiative of the Japanese that swung the match their way in the third. Yonao kept up the pressure with her smashes, even as the Luos preferred to lob the shuttle back and catch their opponents on the counter by surprise. The Japanese gained inch by inch in the third, showing greater patience than the Luos, who eventually faltered before a pair that showed no sign of wilting.

Yonao/Fukuman will have to gear up for possibly another long match, against Indonesia’s Greysia Polii/Nitya Krishinda Maheswari. Chang Ye Na/Lee So Hee will be up against Japan’s Misaki Matsutomo/Ayaka Takahashi.

China’s twin Women’s Doubles losses spoiled an otherwise happy day for the hosts, who stayed in contention of four titles. They had the best returns in Men’s Singles, with Chen Long, Lin Dan and Tian Houwei making the last four; Li Xuerui and Wang Yihan will lead their Women’s Singles challenge on the morrow.

Japan too would have reason to feel satisfied. Apart from Fukuman/Yonao and Misaki Matsutomo/Ayaka Takahashi, Takeshi Kamura/Keigo Sonoda (Men’s Doubles) will feature in the semi-finals. Kamura and Sonoda kept their heads despite the maverick abilities of their opponents. Sanjaya in particular displayed some nifty tricks, besides intercepting everything that came his way. The Indonesians frequently came up with outrageous shots, but the Japanese weren’t disheartened and pulled away steadily at the end to earn a semi-final place against top seeds Lee Yong Dae/Yoo Yeon Seong (Korea). The other semi-final will be an all-China battle: Fu Haifeng/Zhang Nan against young duo Li Junhui/Liu Yuchen.

Saina Nehwal pronounced herself fully fit once more after a classy win over Wang Shixian, 21-16 21-19.

The Indian, who has struggled with Achilles tendinitis in her right foot, showcased some of her finest badminton in recent times in battling past her familiar adversary.

“I’m very happy with my movement,” said Nehwal. “The Achilles tendinitis is basically an overuse injury. I was advised rest, that’s why I didn’t play the Singapore Open. It looks like it’s finally healed, I didn’t feel any problem. I was moving well and my netplay was also very good. In the second game I was leading and tried to hurry things up and made a few mistakes.” Top seed Li Xuerui had trouble quelling the challenge of Tai Tzu Ying, which she did thanks to some help from the erratic Chinese Taipei star. Tai was alternately brilliant and ordinary as she went down 21-17 21-19.

Wang Yihan effected a dramatic turnaround against her recent nemesis Nozomi Okuhara. Having lost three straight matches, and with a 21-8 whipping in the first game, Wang looked down and out but suddenly rediscovered her best form. The steep angled slices and drops punched holes in Okuhara’s defence and although the Japanese took the fight to the very end, Wang – who later called it one of her most important wins – scraped through 8-21 21-13 21-19.

“She changed her tactics in the second game and I wasn’t prepared for that,” said Okuhara. “But I fought well in the third and so I’m not really disappointed that I lost.” Indonesia’s Tontowi Ahmad and Liliyana Natsir were never threatened by Korea’s Choi Solgyu and Eom Hye Won, as they cantered to a 21-16 21-15 victory, which gave them a semi-final against another Korean pair, Shin Baek Cheol/Chae Yoo Jung.