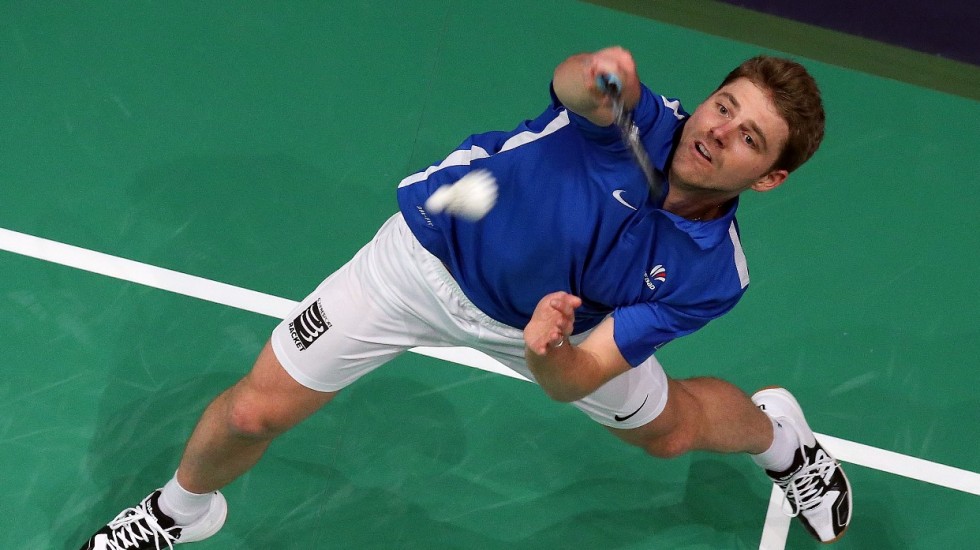 Kirsty Gilmour summoned all her experience yesterday in withstanding the determined challenge of Russia’s Natalia Perminova as the 25th European Championships entered its third day in La Roche-sur-Yon, France.

After taking the first game comfortably, the Women’s Singles no.2 seed received a real scare as her lower-ranked rival fought back spiritedly, with some dogged defence and skilful, unreturnable net shots, to force a decider. 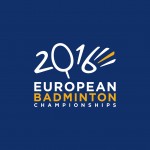 However, Gilmour – the Commonwealth Games silver medallist – regained composure to win the match, capitalising on a four-point lead at the change of ends. Her 21-14 13-21 21-10 triumph keeps alive Scotland’s hopes of a first singles medal at any European Championship. Perminova’s reward for her hard work this week was to overtake Ksenia Polikarpova in the race to Rio rankings.

Gilmour’s success also inspired young team-mate Adam Hall to a Men’s Doubles quarter-final with veteran Robert Blair in Hall’s first continental outing as they hit back from 14-9 down in the second game to defeat Matthew Nottingham and Harley Towler 21-14 21-18. 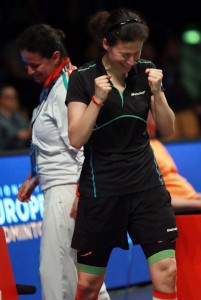 Next on the Scotswoman’s radar is Spain’s sixth seed Beatriz Corrales. The latter disposed of Latvia’s Kristine Sefere, 21-19 21-12, to reach the quarter-finals.

“We know each other’s game pretty well. We have met three times,” said Gilmour who leads their head-to-head 2-1.

Elsewhere in Women’s Singles, Ozge Bayrak’s hopes of adding another medal to her bronze of two years ago were dashed in the last 16 when the Turkish player was edged out by eighth seed Linda Zetchiri of Bulgaria 21-16 15-21 21-14 in what was a close contest until Zetchiri won seven of the last eight points.

In Men’s Singles, a potential blockbuster is in the making as No.6 seed and hometown hero, Brice Leverdez (featured image), booked a last-eight appointment with defending champion Jan Jorgensen of Denmark. The Frenchman lost to his Danish arch-rival at the same stage two years ago. In Kazan, Leverdez lost 21-12 19-21 21-12 but he set himself up for the rematch with yesterday’s 21-12 21-11 win over Israel’s Misha Zilberman. Jorgensen was just as dominant, brushing aside Dutchman Nick Fransman (21-10 21-12).

France’s hopes of a second quarter-finalist were dashed when Rajiv Ouseph, who took silver in Kazan behind Jorgensen, won a close contest with Lucas Corvee 21-17 21-16 as all the remaining seven seeds progressed into the last eight.

There was another intriguing Scandinavian duel when Denmark’s fourth seed Hans-Kristian Vittinghus overcame Sweden’s 2012 silver medallist Henri Hurskainen 21-13 22-20 after the Swede had recovered from 19-16 down to hold game point.

Yuhan Tan is the only unseeded play in the men’s quarters with third seed and 2012 champion Marc Zweibler of Germany now in his way. Tan ended Petr Koukal’s run with a 21-18 21- 15 win over the Czech hopeful.

“I know Petr very well and one thing I needed to do was stay focused right to the very end. Petr played an amazing match yesterday and was maybe feeling the effects of that huge effort to put himself in with a shout of Rio. As for myself this is my last European Championships and the last two times I lost in round of 16 so I am so happy to get to quarter finals,” said Tan. 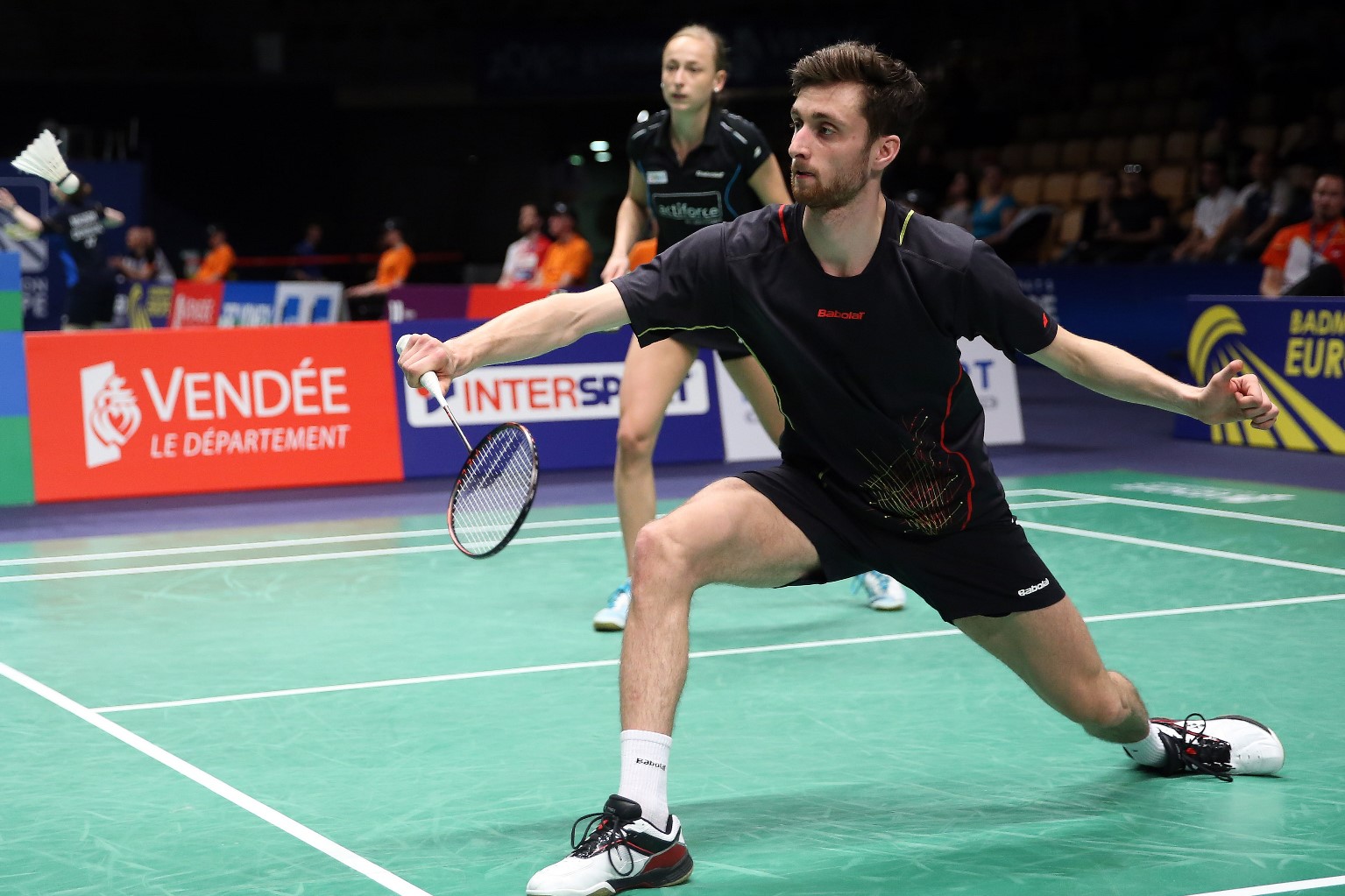 “That was a tough match today after such a good start in the first game. Maybe we got a bit complacent and we have to give credit to Amanda and Nico as they pushed us right deep into our reserves,” admitted Chris.

There were mixed fortunes for France in the same category. Bastian Kersaudy and Lea Palermo knocked out Russian sixth seeds Vitalij Durkin and Nina Vislova, 22-20 21-14, but No.7 seeds Ronan Labar and Emilie Lefel fell 21-12 23-25 21-13 against Mathias Christiansen and Lena Grebak. There was also an agonising defeat for Gaetan Mittelheisser and Audrey Fontaine at the hands of No.3 seeds, Jacco Arends and Selena Piek of the Nethelands (17-21 21-18 21-19). 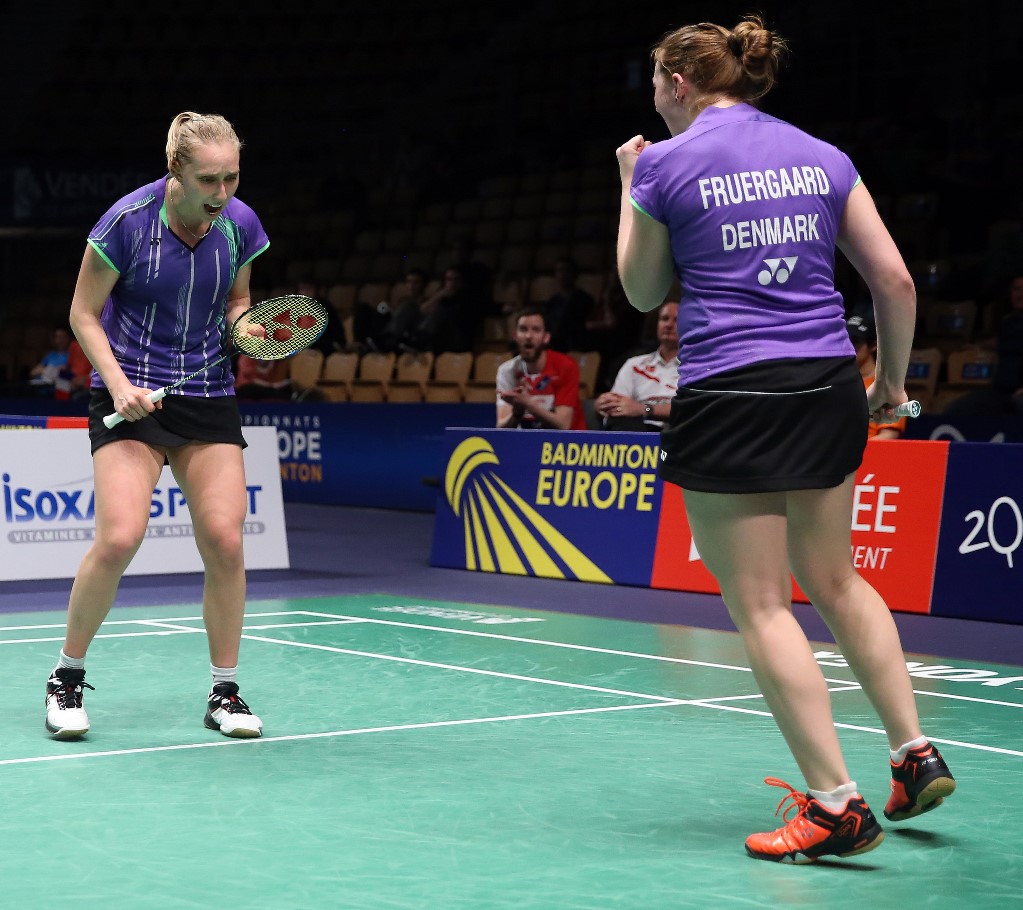