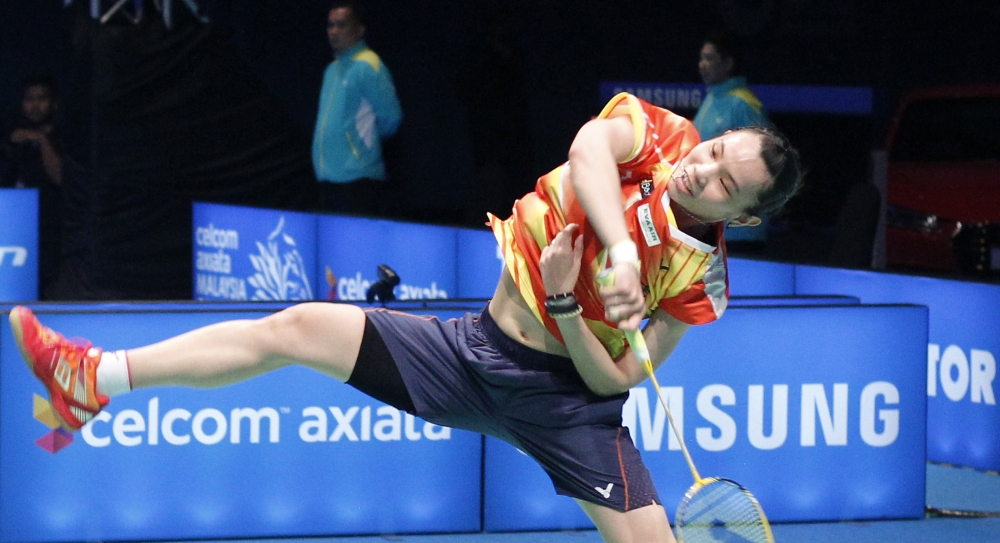 Lightning almost struck twice at the Celcom Axiata Malaysia Open today, as one World champion nearly followed another out on a dramatic afternoon. Mixed Doubles World champions Zhang Nan and Zhao Yunlei were outgunned by a pair that soared on the energy of their home crowd. Chan Peng Soon and Goh Liu Ying hadn’t taken a game off defending champions and top seeds Zhang/Zhao in nine previous matches, but today was different. Chan and Goh left behind a shocked Zhang and Zhao even as, on an adjacent court, an equally compelling drama was playing out.

Indonesian Men’s Singles qualifier Jonatan Christie, playing his first World Superseries semi-final, that too against World champion Chen Long, had decimated his opponent in the first game and looked set to wrap up the match in two.

If Chan and Goh emerged victorious, and Christie was left contemplating what might have been, it had much to do with the Malaysian pair’s nerves under pressure. They played uninhibitedly even after losing a close first game 24-26; Goh was unflappable at the net and consistently outdid her opposite number Zhao, while Chan’s big smashes were often unreturned.

Goh was a standout in the third as she defended everything thrown her way and created openings for Chan with some nifty shots at the net. It was the Chinese who eventually cracked towards the end, handing the Malaysian pair a 24-26 21-15 21-13 victory and a final against Tontowi Ahmad/Liliyana Natsir. The Indonesians beat Denmark’s Joachim Fischer Nielsen/Christinna Pedersen 21-18 21-17.

“We hadn’t taken a game off them in nine matches,” said Goh. “The crowd lifted our spirits. We were quite excited to play in that atmosphere.” Meanwhile, Christie was making Chen look shockingly out of depth. The Indonesian Men’s Singles prospect picked points at will: his quickness and calm netplay helped him create openings; sharp shots homed in on the lines. A 20-5 lead was quickly converted to a first game win. Christie pushed on with the same momentum in the second, and at 19-16 it looked like a second quake was about to convulse the event. Not in his recent career has Chen fallen to a qualifier.

Christie made the critical mistake on a toss at the baseline. Attempting to first play the shuttle, he decided to let it fall, which it did well inside. Two stunning blocked returns from Chen took the wind out of Christie’s sails, and another misjudgement helped the defending champion even at a game apiece. Chen faced little threat in the third, and he quickly wrapped it up 8-21 21-19 21-14.

“I was lucky,” admitted Chen. “I would never have let that shuttle fall. Maybe he will learn with experience. I used to be like that when I was younger.”

Christie, on his part, admitted he tried to finish the second game quickly. “I was a bit hasty. I wasted the chance to beat Chen Long, but I’m proud of the way I played. This will give me confidence to keep progressing.”

Chen’s opponent in the final will be home hero Lee Chong Wei, who will be eyeing his 11th home title. Lee had it all his way against Jan O Jorgensen, even showboating on a couple of points as he eased to a 21-7 21-14 rout.

The Thai produced a performance of precision, power and control to finally break her jinx. To her credit, she refused to buckle even when down 15-19 in the second – as she drew near, it was Wang who started to get shaky, and the former World champion fluffed a few kills to hand Intanon her place in her second straight Superseries final.

“It was important for me to beat her after losing 12 straight matches,” a relieved Intanon said. “I was still thinking about my previous losses before the match. I tried to not put pressure on myself. I’ve been working on my fitness and that’s obviously helped. I’m getting better and better. I think I can improve even further.”