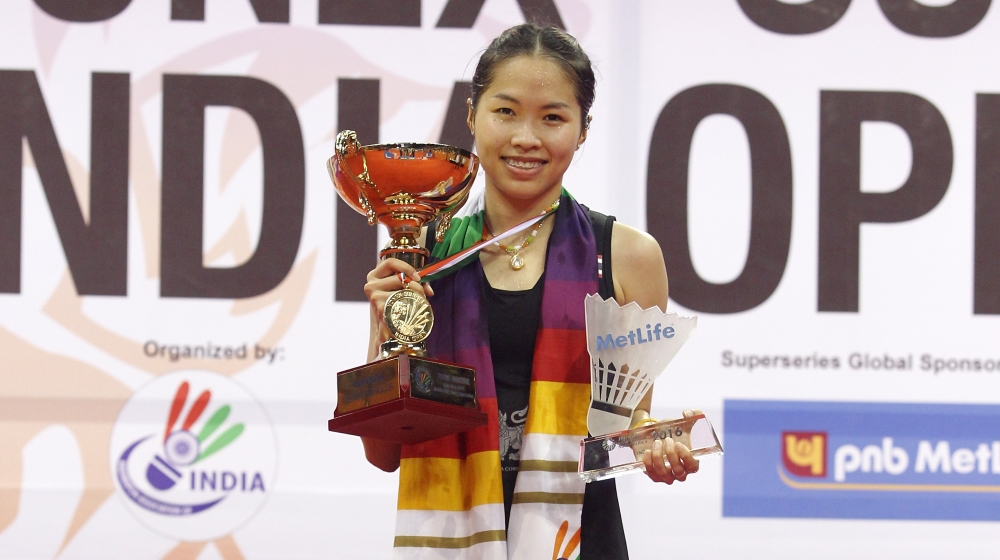 Kento Momota and Ratchanok Intanon claimed the singles titles at the Yonex-Sunrise India Open 2016 that concluded in New Delhi today.

Momota’s impressive record of winning each of his World Superseries finals continued. The Japanese pocketed his fourth Superseries in as many finals, beating Denmark’s Viktor Axelsen 21-15 21-18. A short while earlier, Ratchanok Intanon (featured image) had conjured a dazzling display of power, precision and craft to recapture the title that she had last won in 2013.

The victim on the opposite side was Li Xuerui, a former India Open champion herself, who was left befuddled in the wake of a near-perfect performance from her Thai opponent. Such was the mastery that Intanon brought that the match went her way in straight games, 21-17 21-18, in 42 minutes.

It was her controlled aggression and near-flawless execution that helped Intanon pile on the points. Li stayed within sight, but Intanon remained calm at the end of both games to convert her chances. Intanon’s sharp strokes, many finding the lines, cut through Li’s defences and had her trailing in both games. “The shuttle was fast today, I almost played a doubles kind of game with a lot of flat strokes,” said Intanon. “I didn’t want to engage her in long rallies. I was nervous towards the end and that helped her get close. I had to keep telling myself to calm down. I’m so thankful to have regained this title. I’d like to dedicate this to our princess whose birthday it is today.”

Viktor Axelsen was totally out of sorts in his Men’s Singles final. The Dane misjudged tosses, faulted a couple of times on serve and blew his half chances to make it rather easy for Kento Momota. The Japanese played patiently, catching his opponent with quick jabs and flicks, preventing Axelsen from getting any rhythm.

A fluffed net shot gave Momota match point at 20-15. Axelsen enjoyed a brief resurgence to save three match points, but the Japanese eventually killed the shuttle on the fourth opportunity, wrapping up his fourth Superseries title 21-15 21-18.

“I think Momota played well today, and I didn’t,” Axelsen conceded. “There was a bit of drift today and I made a few errors in judgement.”

Momota was thrilled with his fourth Superseries victory. “I was consistent and able to execute my plans. My experience in previous Superseries finals helped.”