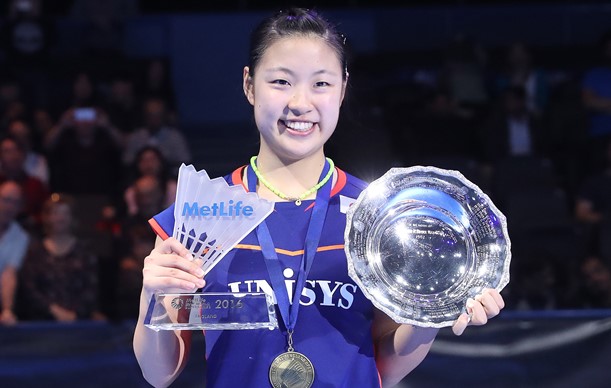 There is a new sheriff in Women’s Singles and her name is Nozomi Okuhara!

The young Japanese wonder kept her cool amid a testy ending to her final at today’s YONEX All England Open Badminton Championships to lift the prestigious honour on her 21st birthday.

Her opponent, Wang Shixian, imploded after a series of warnings from the umpire which earned her a yellow card and eventually a red card – and a point penalty – at the worst possible moment. Shortly thereafter, another error handed the trophy to Okuhara much to the delight of a packed Barclaycard Arena in Birmingham – 21-11 16-21 21-19 in 99 minutes of energy-sapping rallies.

“I am so happy to fulfil the expectations fans have of me since I won in Dubai and I’m really pleased the finals were on my birthday. It’s the best birthday of my life,” declared an overjoyed Okuhara who shot down three players seeded higher than her en route to glory.

Having won the first game for the loss of just 11 points, she might have thought her birthday celebrations would start earlier than expected but then the real Wang showed up and the proceedings took a different turn. In boxing terminology, it was punch for punch as the players pushed and pulled each other around the court, drawing the best out of each other in some long, punishing exchanges. Both were clearly fatigued from their exertions over the previous four rounds and the umpire was constantly urging them to “Play, please”. The experienced Wang fought back superbly to lead the decider almost all the way. At 17-14 up, she was zeroing in on her third trophy in Birmingham, having won in 2011 and 2014, when a lapse in concentration allowed Okuhara to pull level at 17-17. Wang took her time in getting ready to resume play and, having been shown yellow already, was duly shown red for Okuhara to go ahead 17-18.

Though Wang managed another fightback to 19-19, the mental anguish she suffered was just as much to blame for her demise as was the last point which she netted. The loser acknowledged just as much, though critical of the umpiring.

“I had a lot of opportunities to win this match. It’s my fault, nothing to do with my opponent. I didn’t handle the situation well.

“I am still happy to get this far as it means my hard training is paying off,” she noted. Meanwhile, Okuhara basked in the thrill of victory, achieved at the expense of some stellar peers: Wang Yihan in the quarter-finals; defending champion and top seed, Carolina Marin in the semi-finals and the No.7 seed, Wang Shixian. This accolade followed up her success in the year-end Dubai World Superseries Finals in which she played unbeaten throughout the group and knockout stages to finish 2015 on a high. Recognising she will be a ‘marked woman’ now, she looks forward to the challenge.

“I am very excited about that. It will force me to become better with more players trying to beat me,” said the winner, her trademark grin spreading across her face. The Men’s Singles final was one-way traffic as two-time Olympic gold medallist Lin Dan sent a message to fellow players as well as to Chinese badminton authorities with his 21-9 21-10 demolition of team-mate Tian Houwei.

The legendary left-hander was in ominously good touch as he sped to his sixth All England triumph in 45 minutes, with lots of clinical kills that drew repeated applause from the huge crowd.

“I am pleased that I have usually performed well at the All England. Everything here is amazing – the lighting, the arena, the fans. I enjoy playing here,” said the badminton icon.

“Players have their ups and downs but, since my comeback, I have been aiming to show I’m still the best. I’m very proud because this is not only about rankings but also about being in great shape. In the Chinese team you won’t be selected just because you are the Olympic champion.

“All the Chinese coaches are in that corner and I want to show them even though I am 33 I can still do it.”