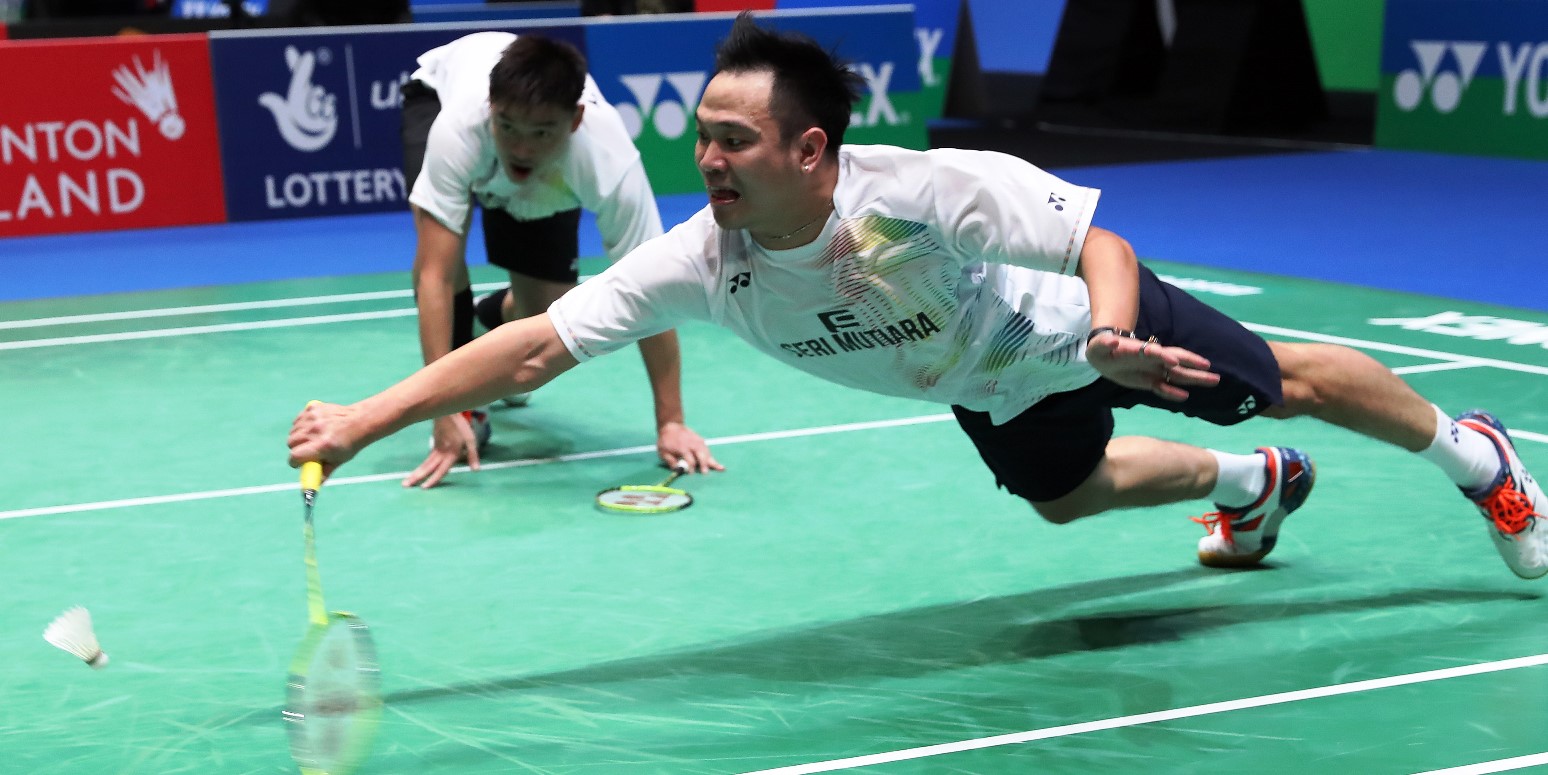 For the second day running, Men’s Singles at the YONEX All England Open Badminton Championships was jolted by the loss of one of its biggest personalities – defending champion and top seed, Chen Long, being brushed aside in straight games.

Less than 24 hours after Malaysian ace and No.2 seed, Lee Chong Wei’s nightmarish exit, China’s top gun was booted from the Barclaycard Arena by

his 22-year-old team-mate, Xue Song. The 21-19 21-17 defeat means a new singles king will be crowned come Sunday in Birmingham.

Appearing a step quicker and more daring in crucial exchanges, Xue led and then kept pace with his compatriot in the first game. At 19-19, things could have gone either way but the winner reasoned he got the luck. In game two, Chen looked to be imposing himself on the proceedings but Xue fought back from deficits of 7-3 and 17-14. In fact, he won the last seven points to clinch a famous victory, though he remained subdued given the close bond between him and Chen Long.

“I am happy I played well…but not happy because I beat Chen Long. We are now starting the season so we are not on top form but I was happy with my drive shots, compared to previous matches,” assessed Xue.

Hardly ruffled by the outcome, Chen Long noted that at elite level all the Men’s Singles players are “extremely good…anybody can win or lose”.

While the two-time World champion did not think he played badly, he said he lost some weight in the off-season and needs to build himself up physically for the months ahead, including an assault on the Rio 2016 Olympic Games title.

Malaysian fans, still reeling from the surprise ejection of their standard-bearer Lee Chong Wei in the first round, were lifted by the heroics of the evergreen duo who scrapped their way to a 21-15 15-21 21-17 victory versus the World champions.

About two hours later, Malaysia’s hopes skyrocketed as its other Men’s Doubles outfit – Goh V Shem and Tan Wee Kiong – dispatched No.5 seeds, China’s Chai Biao and Hong Wei (17-21 24-22 23-21) in a tense battle. Given that its two pairs will meet in tomorrow’s quarter-finals, Malaysia is assured of a place in Saturday’s Men’s Doubles semi-finals.

Koo and Tan’s reaction on match point – falling to the turf in delight – showed just how much the unexpected result meant to them as they continue to mount a comeback at the highest level.

“We have not played Ahsan and Setiawan in a long time. We were the underdogs and we had nothing to lose. We prepared very well and we were very alert today. I am happy our strategies and mindset worked. This is a good sign for us,” said a slimmer looking Koo, soaking in the glory of success. Having levelled the match at one game each, it seemed the Indonesians would motor ahead. That was not to be, however, as Koo and Tan grabbed the ascendancy from 6-6 in the decider and never looked back.

“They played better than us and their defence was excellent. They are great partners who know each other well as they have been together a long time,” noted Setiawan.

The demise of No.8 seeds Mads Conrad-Petersen and Mads Pieler Kolding – who enjoyed an amazing run to last year’s All England semi-finals – further blew open the Men’s Doubles category. The Danes were beaten in straight games by Russia’s Vladimir Ivanov and Ivan Sozonov, 21-19 21-15.

In late-night fireworks, the English home crowd cheered on the sterling efforts of Marcus Ellis and Chris Langridge who fought back to oust No.7 seeds, Kim Gi Jung/Kim Sa Rang. The Koreans took the opening game but were beaten, 14-21 21-15 21-16, while their team-mates and top seeds, Lee Yong Dae/Yoo Yeon Seong, just about held off China’s Liu Cheng/Lu Kai, prevailing 23-25 22-20 21-17 in a 99-minute war of attrition.

“It was a massive match. I’ve played in so many All Englands and I’ve never made the quarter-finals. We played some of our best badminton,” declared an emotional Langridge.

“On our day we’re pretty good – and dangerous. We’ve just been a bit up and down and we need to work on that.” Denmark saw three players into the Men’s Singles quarter-finals as Jan Jorgensen, Viktor Axelsen and Hans-Kristian Vittinghus all progressed as did Germany’s Marc Zwiebler who stopped Indonesia’s Tommy Sugiarto. China’s Lin Dan rebounded from a game down to whip Japan’s Sho Sasaki, 20-22 21-6 21-8, and must certainly fancy his chances in the absence of his two biggest rivals. Kento Momota of Japan is also still in the mix. The elite of Women’s Singles athletes duly booked their places in the quarter-finals; only Korea’s Sung Ji Hyun – the No.5 seed – failing to negotiate her way past the crafty Tai Tzu Ying (Chinese Taipei). Some absorbing battles now lie ahead, including defending champion Carolina Marin of Spain versus Thailand’s darling, Ratchanok Intanon, and Chinese veteran, Wang Yihan, tackling young Japanese, Nozomi Okuhara. No.2 seed Saina Nehwal of India will also have her hands full with Tai.

Denmark’s Christinna Pedersen and Kamilla Rytter Juhl remain the lone Europeans in Women’s Doubles, with three Chinese pairs and two pairs each from Japan and Korea also in the hunt.