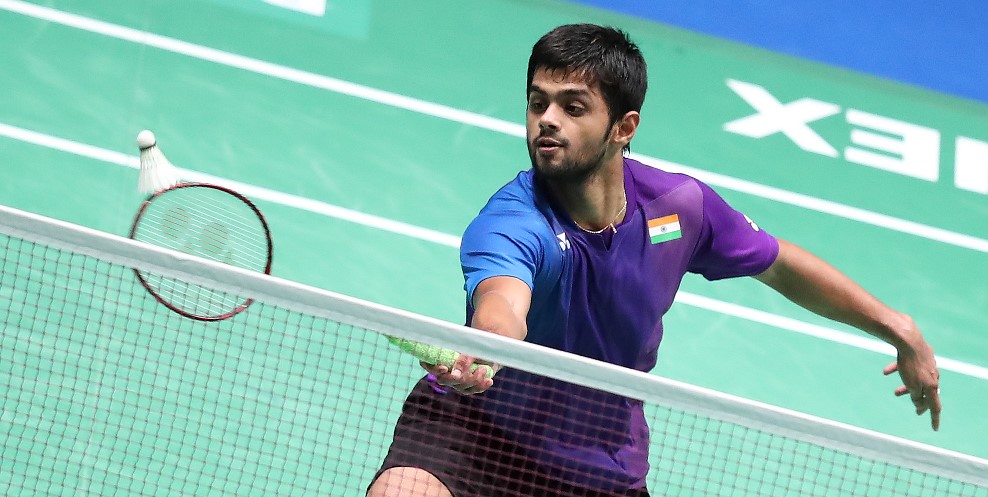 A nightcap result of mammoth proportions rocked the YONEX All England Open Badminton Championships this evening as Men’s Singles supremo, Lee Chong Wei, was sensationally dumped from the tournament in the first round.

His conqueror, the unheralded and unseeded B. Sai Praneeth of India, looked just as stunned as the superstar as they exited the courts at the Barclaycard Arena in Birmingham where the drama unfolded. Fans struggled to fathom not only the overall outcome but furthermore how the Malaysian legend squandered handsome leads of 11-3 and 15-7 in the opening game – and 16-10 and 17-12 in the second game – when he appeared to be cruising into the second round. This was not what they expected from one of the sport’s icons who had reeled off four successive tournament wins since last October in Paris.

An increasingly confident Praneeth held off Lee’s quest to convert game points in both games as he prevailed 24-22 22-20 for the greatest moment of his career.

“This is a big shock to me. I am very happy. I have been waiting for a big result like this. I got more confident when I levelled the score 15-15 in the first game and I just kept playing my shots,” said the 23-year-old beaming proudly, having snapped Lee’s 21-match winning streak.

Meanwhile, the beaten No.2 seed – always a crowd favourite at All England – admitted he was equally stunned to lose, having been in a rich vein of form in recent months as he picked up three World Superseries titles and one Grand Prix Gold title.

“This is totally unexpected for me. I came here to win,” said 33-year-old Lee. “Praneeth has improved a lot since we played in the Canada Open last year. I think he has a great future.” The last men standing in the 2015 Dubai World Superseries Finals – which Momota claimed – looked in danger of being catapulted from this season’s curtain raiser in the first round. Strapping Dane, Axelsen, snuffed out a match point at 19-20 down in the second game, rebounding to beat his French

A few hours later, Momota found just enough of his game to hold off 18-year-old Christie who gave a creditable performance before falling 19-21 21-18 21-13 in 77 minutes. The usually flamboyant Japanese appeared sluggish at the start and was lucky – thanks to his young opponent’s inexperience and errors – to secure the second game from 15-17 down.

Haunted by regrets over his costly lapse in concentration, Christie trailed from 4-4 in the decider and was unable to regroup, though he continued to show flashes of the enterprising play that earned him the first game. Breathing a huge sigh of relief on match point, Momota conceded it was not his best showing.

“It’s my first match in a while and I was a bit rusty. I am just happy to win and still be in the tournament,” said the 21-year-old.

Axelsen echoed similar sentiments, declaring “It wasn’t pretty but a win is a win! I hope I will play better tomorrow.”

Moments earlier he had prevailed in a riveting see-saw tussle versus Leverdez who, like Christie, rued his missed opportunities. The first was a squandered match point in the second game and, having drawn level at 20-20 in the third game – saving two match points against him – the Frenchman was called for a service fault to give Axelsen a third match point. Evidently rattled, Leverdez lost the last point meekly.

“There wasn’t much difference today between us. I am confident in the way I’m playing and my tactics were working though he put more pressure on me in the second game,” noted Leverdez. The going was also rough for defending Women’s Singles champion, Carolina Marin, who needed 88 minutes to avoid disaster against wily Korean, Bae Yeon Ju. The Spaniard’s trademark shouts increasingly pierced the air as she pulled away in the dying stages of the sapping contest for a 25-23 20-22 21-15 triumph.

“It was a tough match…I have to play better. I can’t afford to make easy mistakes. I also need to be more confident with my serve,” assessed the two-time World Champion.

Other big names in singles came through unscathed as the likes of Lin Dan, Chen Long and Jan Jorgensen breezed through in Men’s Singles while Ratchanok Intanon, Wang Yihan, Lu Xuerui, Nozomi Okuhara, Sung Ji Hyun and Wang Shixian won on the women’s side. Most of the doubles encounters also went according to the seedings script with the notable exception being the demise of Women’s Doubles No.2 seeds, Nitya Krishinda Maheswari and Greysia Polii. The Indonesians were the first shock casualties of the tournament, plummeting in straight games (21-18 23-21) to last year’s World Championships bronze medallists, Naoko Fukuman and Kurumi Yonao of Japan.