With just a few months of the Olympic qualification period remaining, the Race to Rio is set for a thrilling home stretch. Of particular interest in the Women’s Singles category is the fate of the top three Chinese – Li Xuerui, Wang Yihan and Wang Shixian. With all three strongly placed in the ‘Race to Rio’ rankings, the two eventual qualifiers will require plenty of nerve and some luck to make the final cut. 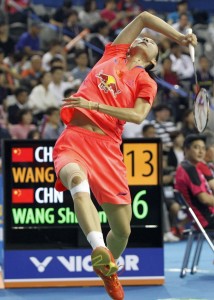 Wang Yihan, who finished runner-up at the London Olympics, has gone over a year without a major title. Still, the lanky Chinese stalwart had a solid season in 2015, reaching the finals of the Yonex Open Chinese Taipei, Victor Korea Open and the Dubai World Superseries Finals, besides figuring in several semi-finals and quarter-finals. At the prestigious Dubai World Superseries Finals, she got the better of Thailand’s Ratchanok Intanon and compatriot Wang Shixian on the way to the final, proving that she still had the fire to excel at the highest level.

With the Olympics looming ahead, Wang – currently No.2 in the ‘Race to Rio’ standings – will back herself to go all the way to the gold medal. But before that, she will have to ensure she doesn’t slip in the qualifying period.

“I hope to qualify for the Olympics,” she says. “As there will only be two Women’s Singles players from China who can take part, the competition between us is very intense. Of course everybody hopes to be an Olympic champion. Everybody wants to win the gold medal for their country. That is everybody’s dream and that is my dream too. But I will take it one step at a time. For now I will first focus on qualifying.”

The Chinese star hasn’t had it all her way over the last few years. World champion in 2011 and Olympic runner-up the following year, injuries have taken a toll on her career. It didn’t help that Women’s Singles has become the most competitive category with a bunch of hungry young players snapping at her heels. The demands of the sport have increased over time and it has become increasingly difficult for any one player to dominate the circuit.

“I think regardless of Women’s Singles or other disciplines, the expectation on speed and power have 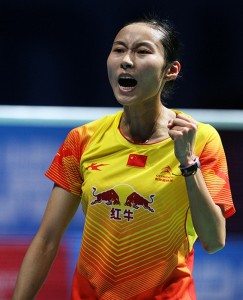 become much higher,” says Wang. “Every team has its star players, not only China. Other teams have grown stronger and have groomed international stars as well. As such, the world badminton scene has grown more competitive.”

Still, Wang has enough self-belief to fend off her challengers.

“For me what is more important is to be able to pick yourself up. I went through this myself so I can relate to the feeling of hitting a wall. No one else will be able to help you except yourself; you have to make adjustment to your emotions.”

For a player who won the World Junior title ten years ago and went on to carve a niche for herself at the elite level, the last decade has seen plenty of high points.

“It is not easy to single out a particular match. It is very difficult to pinpoint one, but there are a few matches that mark the various milestones of my sporting career. They were matches from the 2010 Uber Cup and the 2011 World Championships. Besides that, there was also the 2012 Uber Cup. I also remember the 2012 London Olympics very well and the most recent is the 2014 Asian Games. These are the five matches that are very meaningful to me. They were at the different stages of my career. These five matches reveal the ups and downs of my sporting career.”

Fans of Wang Yihan will hope she will have another event to cherish at the Rio Olympics!