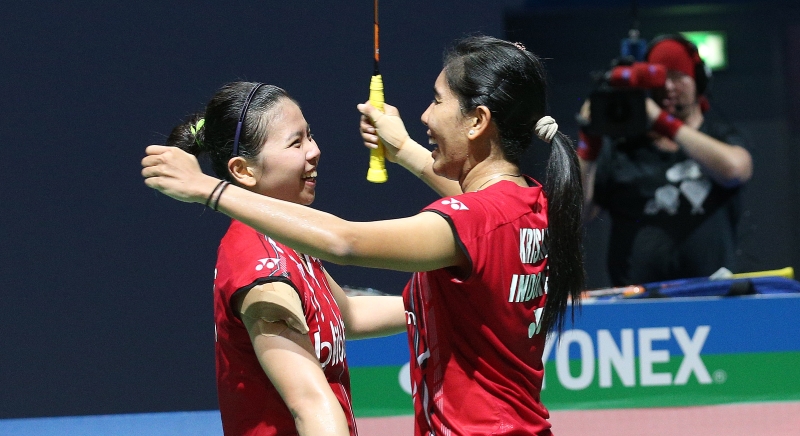 Saina Nehwal pulled a rabbit out of the hat with a gritty win over World champion Carolina Marin at the Dubai World Superseries Finals today. The Indian had looked totally out of sorts in her opening defeat to Japan’s Nozomi Okuhara, blaming it on poor preparation as she was recovering from an Achilles injury. Few expected a turnaround in 24 hours, but the Indian delivered a dramatically different performance against the top seed in Women’s Singles Group A. Gone was the tentativeness of the day before. The early phase of the game showed the Indian had come with a new, aggressive mindset against her recent nemesis. In two of her defeats to Marin this year, Nehwal had appeared cowed down and diffident, but today she yelled encouragement to herself every time she won a point.

With Marin taking it to a third, it appeared a close contest was on the cards. Nehwal, however, only got stronger, while Marin faded past the half-way mark.

Nehwal was as surprised as anyone by her performance.

“I don’t know how to explain it. I never expected to play like this,” she said.

“I went in with no expectations as I had not trained in the last three weeks due to my Achilles injury. But it was one of my best wins.” In Group B, Sung Ji Hyun fell to her second narrow loss.

The Korean had blown four match points in yesterday’s match against Thailand’s Ratchanok Intanon; today she showed courage to climb back from a deficit against China’s Wang Shixian, but the match slipped past her in a flash towards the very end.

Ratchanok Intanon appeared on course for her first win over nemesis Wang Yihan in 11 matches, but the Thai flattered to deceive. Intanon failed to capitalise on her leads in the second game; she was no match for Wang’s athleticism in the third, going down 19-21 21-19 21-11. Greysia Polii and Nitya Krishinda Maheswari (featured image) survived an epic clash against Zhao Yunlei/Tian Qing for only their second win over the World champions.

The 90-minute match, full of interminable rallies, went the way of the Indonesians 21-17 14-21 21-16, giving them a strong shot at making the Women’s Doubles semi-finals from Group B.

With the slow conditions offering no quick winners for either team, the match was characterised by long exchanges with the two pairs testing each other’s endurance and focus. It was baseline to baseline for the most part, with the sudden drop or net shot.

Still, with the Chinese being unflappable under the relentless attack of the Indonesians, they edged ahead 13-10 and appeared to have the upper hand.

The match changed at this point. Polii and Maheswari caught up and continued to grind down the Chinese; Maheswari conjured a couple of winners out of nothing and the Indonesians soon had a winning lead. The win was theirs when Tian was called for a service fault.

“It’s hard to say if this is one of our best wins because every new win feels great,” said Polii.

“We know each other well. Our strategy worked. We were prepared, we’d learned from our past mistakes. The conditions are very slow. This is the Superseries Finals, all the players are tough. We have to be confident that we are one of the best.” The Indian’s poor run of recent times continued, although he did offer some glimpses of his good form in the second game.

“I got too passive in the second game in the front court, and he displayed some nice touch,” said Axelsen. “Overall, I’m happy with my performance.”

Commenting on the conditions, the Dane said it was hard for attacking players.

“Even if you hit hard, it can be tough to get something out of it. The shuttles are slow, hall is big, there’s no wind in here. It makes it hard to attack all the time, so placement is rather important. It helps players like Chen Long who is a stable and physical kind of player, he will be tough to beat.”