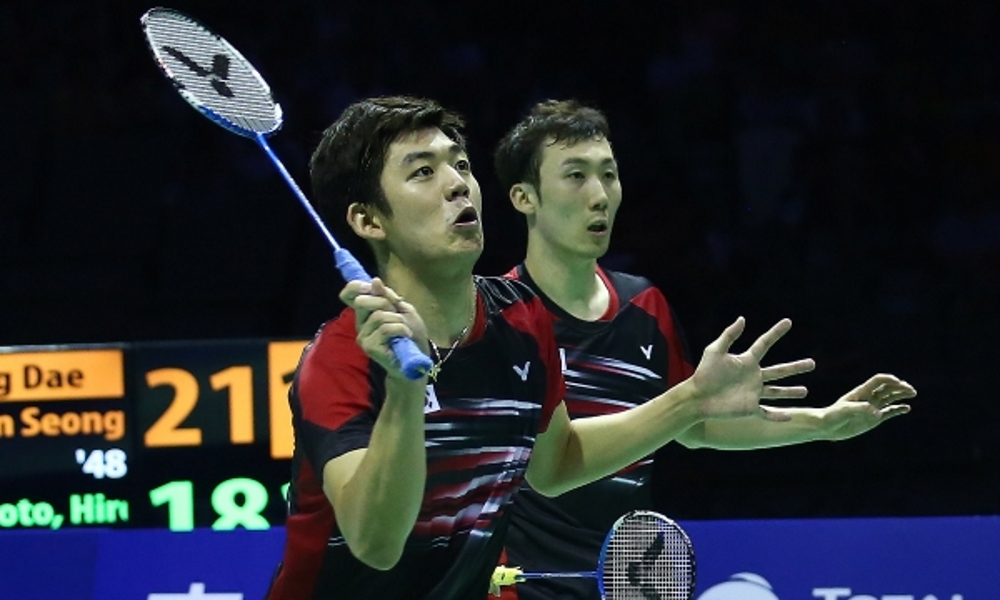 The all-round brilliance of Lee Yong Dae and Yoo Yeon Seong was encapsulated in two extraordinary matches at the Yonex-Sunrise Hong Kong Open in November. In pulling off those two victories, which gave them the title, the Korean Men’s Doubles duo accomplished their sixth World Superseries title triumph this year, consolidating their status as one of the great contemporary pairs and making them runaway favourites for the year-ending Dubai World Superseries Finals.

The two matches followed entirely different patterns. The first – the semi-final against China’s Chai Biao and Hong Wei – saw the Koreans recover from a deep deficit and then keep their heads despite losing several match points in a titanic third game; the second – the final against Denmark’s Mathias Boe and Carsten Mogensen – saw Lee and Yoo decimate the opposition for one and a half games, only to lose focus and flirt with danger before pulling themselves back again. In these two matches, the Korean duo’s vast reserves of focus, stunning defensive and offensive skills, and calmness under pressure were richly evident.

From 12-18 down in the third game of their semi-final, Lee and Yoo levelled at 20, saving two match points. The Koreans would then have five successive match points, only for Chai and Hong to save each before they would have two more of their own. In the face of shifting momentum, it required exemplary fortitude to emerge victorious – and Lee and Yoo showed they had what it took. The 22-24 21-11 30-28 contest might well qualify for match of the year.

Then again, in the final, they were asked very different questions. For the first 40 minutes or so, Lee and Yoo dazzled. A pair of the calibre of Boe and Mogensen were reduced to shaking their heads in despair – they were down 0-11 in a flash; the Koreans ran away with the first 15 points to only four by Boe and Mogensen. At 15-5 in the second game, it was turning into a humiliating rout for the Danes. That was the point at which Lee and Yoo loosened their grip, perhaps deceived into thinking they had the match sewn up. The Danes staged a remarkable comeback to force a third game. It was back to the grind for Lee and Yoo; despite blowing up an opportunity for a straight games win, the Koreans didn’t allow it to play on their minds; they instead readjusted to their new reality and finished narrow winners: 21-7 18-21 21-18.

Boe and Mogensen had mixed feelings at the end; they had wriggled out of a dire situation and they were happy about that, but they had missed the greater glory of converting the escape into victory. Nevertheless, Boe paid rich tribute to Lee and Yoo:

“They always play really stable badminton. Of course, when they are on cruise control like they were in the “It was a strange game for us. Most likely we’ve never been in a match like this. It was a pity we lost. But at the age of 35 and 32, we can still fight even though we were trailing hopelessly against the best pair in the world at the moment. That shows big guts and we’re happy we’ve got that. Sometimes, once or twice out of ten it will succeed, we’ll trail and still win. However, it was good to give the audience a good fight and show the Koreans we’re still serious contenders, with the Olympics coming up.”

The odds will be on Lee and Yoo to defend their title in Dubai. They have enjoyed a rich vein of form and they have scarcely put a foot wrong all year. However, tough opposition from the other pairs will ensure they don’t have it all their way in Dubai. If they can defend their title, it will round off a sensational year for Korea’s trailblazing duo.