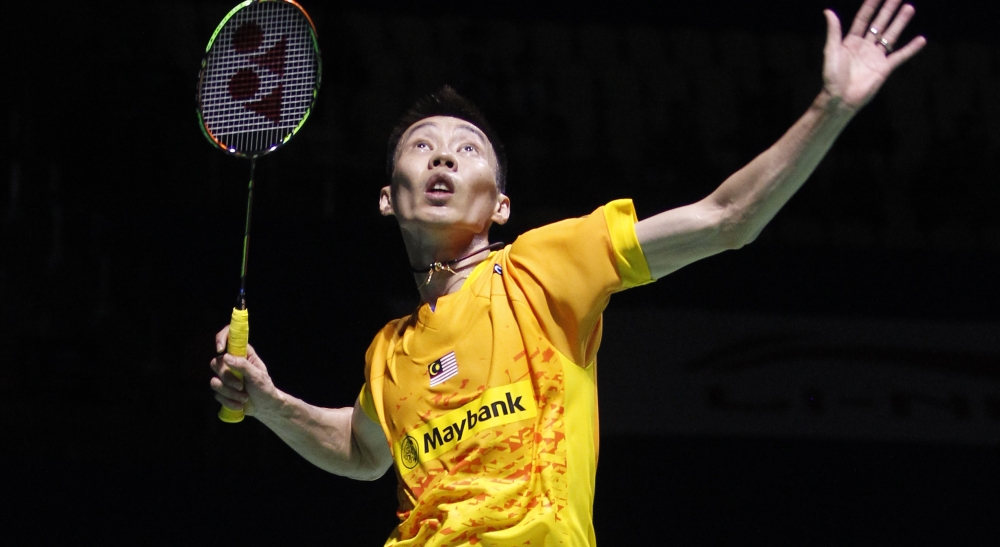 to make the final of the Thaihot China Open 2015 today.

Despite Lin’s loss, China gave themselves a shot at winning all five titles. Lee faces Chen Long in the Men’s Singles final, while the Women’s Singles will see defending champion Saina Nehwal take on Li Xuerui.

The semi-final between Lee and Lin wasn’t possibly their best encounter, for both Lin and Lee were a trifle erratic at times, but there were phases as well when their brilliance lit up the play. The sheer athleticism, control and imagination of the two protagonists had the crowd on the edge all through the match. Lee was up against an opponent hard to hit through; with Lin’s defence wearing him down, the Malaysian trailed in the first.

Lee managed to find a better length in the second, and the result was some long exchanges, with each player exploring the corners of the court; the relative calm shattered with rapid bursts of pace and high intensity fire. Lee overturned a 14-17 deficit, taking seven of the last eight points to force the decider.

However, with Lin taking a 15-10 lead in the third, it looked like a familiar tale for the Malaysian. It was at this point that he took charge. Sustaining a high pace, Lee continued to pound his rival with judicious smashes from the back, and darting across to the net to cut off his opponent’s returns. Rather uncharacteristically, Lin’s usual precision was a little off on the crucial points. Eventually, it was Lee’s attacking intensity despite the strain of the long match that helped him overhaul the lead, and even though Lin climbed back to 19-all from 16-19, Lee’s precision smashes ensured he didn’t have to deal with another heartbreak.

He will hope to reverse a sequence of four straight losses to Chen Long, who hasn’t lost a final since the Hong Kong Open a year ago. Chen was authoritative in his dismissal of Korea’s Son Wan Ho, 21-11 21-17. The Indian never allowed her opponent to get a look-in, expertly executing her tactics to leave Wang constantly frustrated during a 21-13 21-18 victory.

For the most part, Nehwal was able to disallow Wang the length she needed to unleash her steep winners. The Chinese was constantly kept chasing for the shuttle, and Nehwal kept her in a state of indecision with some holding shots near the net. Towards the end, Wang unravelled, and Nehwal snatched her win off her first match point.

“It’s amazing to be in the final,” said Nehwal. “Beating Wang Yihan in the semi-finals is a big achievement as she’s been playing well. It was a good match today. I think overall I have been playing well, I’ve been getting better as the tournament progressed.”

Asked what she was doing right against her former nemesis, Nehwal said the key was her movement.

“There’s a lot of difference in the way I’m playing now. Yihan was my toughest opponent. Now I’ve beaten her for the third straight time. I need to watch and see what I’m doing well. She used to catch me with her flicks from net. Her half smashes were very strong. Now I’m reacting well to her shots.

“Li Xuerui is a tough opponent, I hope to give my best. I want to play my natural game. She’s very strong and I need to plan properly. I played her in Malaysia a few months ago and it was close match. Li has a few strokes which are very good, she’s very strong at the net. Let’s see what happens.”

Li Xuerui had it rather easy against compatriot Wang Shixian, who received treatment for an apparent muscle strain in the first game. Wang, unable to move, could not offer much of a fight as she went down 21-14 21-5.

The Men’s Doubles final will see Kim Gi Jung/Kim Sa Rang (Korea) against Chai Biao/Hong Wei. The two Kims turned in a strong performance against Japan’s Hiroyuki Endo/Kenichi Hayakawa (21-17 21-18), but their compatriots Shin Baek Choel/Ko Sung Hyun were erratic and below par in a 21-15 21-19 loss to Chai/Hong. Zhao Yunlei’s bid for a double came up short as she and Tian Qing were outplayed 21-13 21-19 by compatriots Yu Yang/Tang Yuanting in the Women’s Doubles semi-finals. The Chinese take on Japan’s Misaki Matsutomo/Ayaka Takahashi, who were tested by Chang Ye Na/Lee So Hee (Korea) before scrambling through 21-18 21-17. Zhao made amends in Mixed Doubles as she and Zhang Nan earned their 20th win in 23 meetings against compatriots Xu Chen/Ma Jin. Zhang/Zhao’s 21-19 21-11 win gave them a shot at avenging their Yonex Open Japan final loss to Denmark’s Joachim Fischer Nielsen/Christinna Pedersen. The Danes edged past another Chinese pair, Liu Cheng/Bao Yixin, 21-16 21-19.