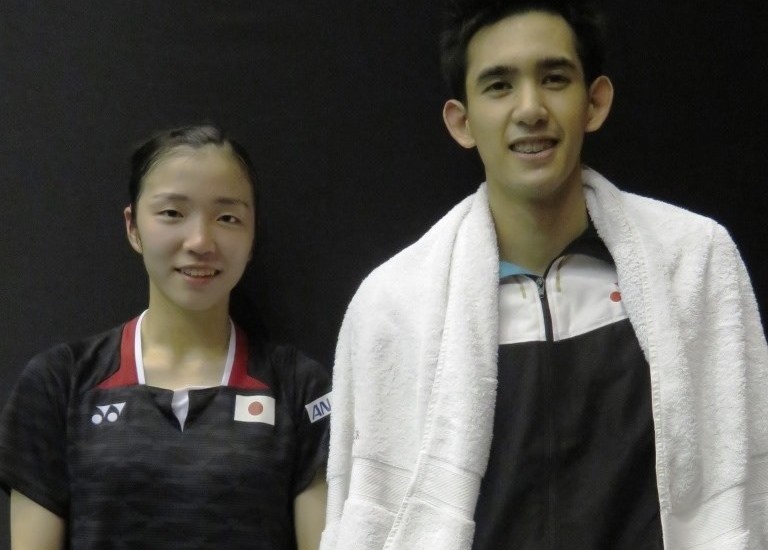 Contrasting but equally compelling victories by outsiders today toppled the No. 1 seeds in Men’s and Women’s Singles at the YONEX BWF World Junior Championships in Lima.

As Black Fridays go, the nightmares could not have gotten much worse for Firman Abdul Kholik and He Bingjiao who had, up until now, cast aside opponents with relative ease as both coasted into the quarter-finals of this showpiece event. Not only were their names in the draws’ top brackets but they were also being uttered by many who have watched the action unfold at the High Performance Center – Videna.

That was all to change within about two hours on this ominous afternoon in Peru. First, Men’s Singles top gun, Kholik, had the stuffing smacked out of him in a dominant onslaught by the unassuming Adulrach Namkul of Thailand (featured image; right). Then, with fans still catching their breath – or exiting if they were shell-shocked Indonesians mourning Kholik’s demise – Japan’s Natsuki Nidaira (featured image; left) dismantled Women’s Singles ace, He Bingjiao, in three energy-sapping games.

A tired forehand into the net by the Chinese star spoke volumes. She had simply been worn down by 17-year-old Nidaira’s relentless pressure and incredible will to win: 12-21 21-13 21-19 in 61 minutes.

“I was tired but I never gave up. I had to keep fighting. It’s the first time I have beaten her,” said the ecstatic winner, wrapped in congratulations from her coaches and team-mates.

“If I continue to play like this maybe I can win the tournament.” The story had been similar moments earlier on the court next-door. Namkul had given a good account of himself this week. However, the No. 14 seed had never beaten Indonesia’s darling and nobody had reason to suspect the script would change today…but it was to be a Friday the 13th that will haunt Kholik forever.

In fact, he will likely rue how he casually squandered points in the opening game – the way this 18-year-old tends to do when ahead in a match – and then watched powerlessly as his opponent suddenly transformed into a menacing, unstoppable force. Kholik – try as he did – could not find a path back into contention as Namkul pulled cleared at 15-15 with some lightning strikes.

Right, on to the second game, but the horror only intensified as a fully-engaged Namkul exploded with even greater attacking precision; bringing repeated errors from a surprised Kholik who, for once, could not cope with an opponent’s speed or power and was not allowed to dictate terms. The Thai guy raced ahead and little Kholik did was effective. He dug deep into his bag of tricks but it was empty; a Namkul backhand shooting past him at net for an 11-3 advantage.

Another lengthy, losing rally left the diminutive top seed hunched over and gasping hard. He had just dived full-stretch twice to return the shuttle, only for his rival to win the honours with a drop shot; 15-6 the score at that juncture. The end came swiftly, leaving both players stunned – but for very different reasons.

“My coach prepared me. He told me attack a lot; whenever the shuttle is high to smash and to cover my front court,” said the 18-year-old conqueror. “I’m shocked. I’ve never played like this and I’ve never beaten him. This will give me a lot more confidence.” 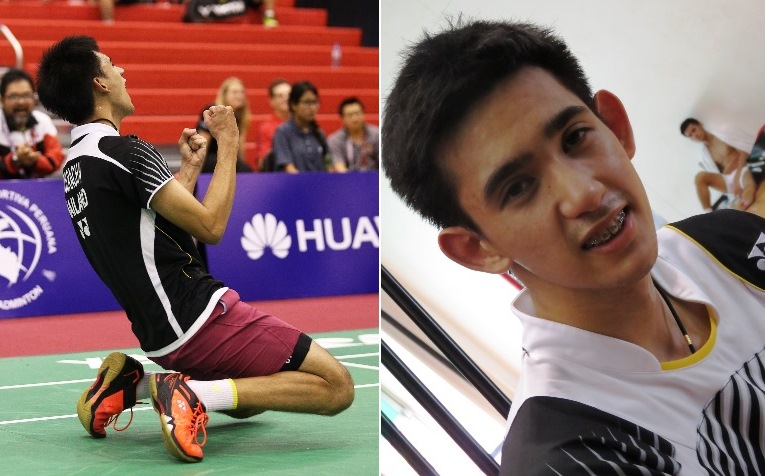 Speechless Kholik was unable to explain the 21-15 21-7 result as he shuffled out of the stadium, evidently still reeling from the blows; the show-stopper’s reputation severely roughed up.

Meanwhile, a third epic battle – Lu Chia Hung’s comeback win over Lin Guipu – turned potential glory into a gory campaign for China as the Asian powerhouse was left without a singles medal – a first in the history of badminton’s World Juniors! Lu overcame fourth-seeded Lin, 19-21 21-10 21-18, while China’s other hopes Gao Fangjie and Chen Yufei lost in Women’s Singles. Gao’s ambitions were thwarted by Japan’s Moe Araki (21-16 21-18) while Malaysia’s Goh Jin Wei (below; left) held her nerve with some good net play to defeat Chen, 21-19 22-20. Araki and Goh will now clash for the first time to determine who reaches Sunday’s final. “I am excited to contribute at least a bronze to my team. It’s my first medal at World Juniors. I was nervous. I wanted to get into the semi-final so I was playing safe, not daring to attack too much,” said 15-year-old Goh.

Malaysia will also be across the net from Japan in the other Women’s Singles semi-final as unseeded Lee Ying Ying (at right; right) rebounded to oust Denmark’s No. 4 seed, Julie Dawall Jakobsen, 19-21 21-13 21-10. She takes on giant-killing Nidaira over whom she has triumphed before in three games.

On the men’s side, the other two semi-final berths were secured by Koki Watanabe of Japan and India’s Siril Verma.

“I’m surprised but the performances keep coming. It’s India’s first medal for a few years and I will try to make it gold,” declared 16-year-old Verma who will tackle Namkul for the first time while unseeded Watanabe looks to avenge his Suhandinata Cup loss to Lu.

In Men’s Doubles, Joel Eipe and Frederik Søgaard Mortensen, were desperate for a medal in their last year at junior level. The No. 2 seeds flung themselves all over the court to get it; ousting Korea’s Lee Hong Sub Lee/Lim Su Min, 21-15 21-13. The last Danish representatives in the tournament screamed in delight on match point.

“We are so happy to be in the semi-finals and to get a medal. We were close last year but we didn’t get it,” said Eipe.

Regarding their success versus a number of Asian pairs, Søgaard Mortensen disclosed “Asians are great at the flat game so we play soft and around the net a lot”.

“We wanted to get them out of their comfort zone,” added Eipe.

They clash with Han Chengkai and Zhou Haodong  of China while the other semi-final features top seeds, China’s He Jiting and Zheng Siwei, versus No. 3 seds, Kenya Mitsuhashi and Yuta Watanabe of Japan.

Despite their singles disappointment, China remains on track to excel in doubles with four players still capable of winning two gold each; He Jiting and Zheng Siwei on the men’s side and Chen Qingchen and Du Yue on the women’s side. Japan’s Chiharu Shida has also advanced to the Women’s Doubles and Mixed Doubles semi-finals.