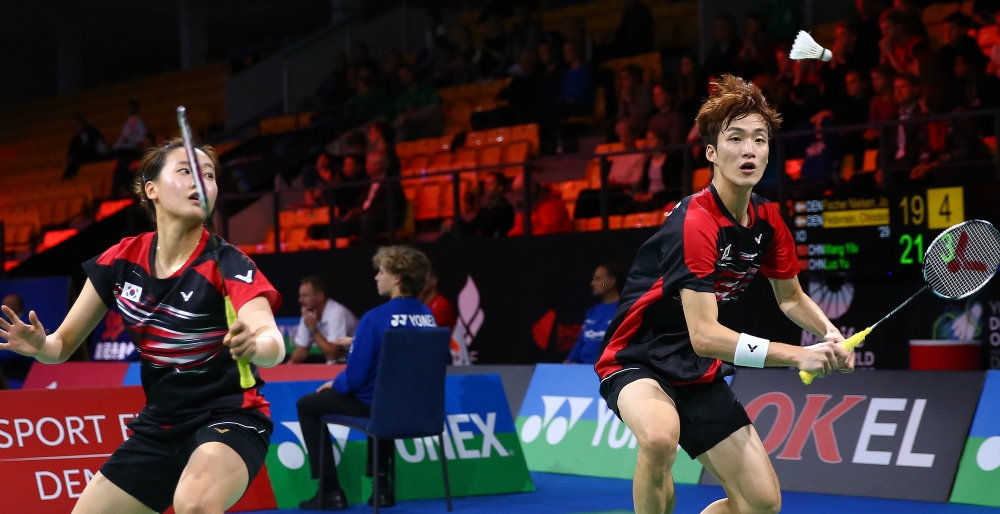 There will be no fairytale finale at this year’s Yonex Denmark Open for red-hot Mixed Doubles duo, Zhang Nan and Zhao Yunlei,

as they perished in straight-games in yesterday’s second round.

In fact, theirs was just one of a number of defeats which shook Odense Sports Park and which, were he alive, would have left the city’s most well-known son – renowned author Hans Christian Andersen – pondering how to script a “happily ever after” ending out of the unfolding carnage.

The result which jolted fans upright though was the demise of the usually rock-solid world No. 1 Mixed Doubles partnership which has continued to prosper this season. Boasting four titles on the MetLife BWF World Superseries circuit so far in 2015, Zhang and Zhao were highly favoured to brush aside fledgling Korean pair, Shin Baek Cheol and Chae Yoo Jung (featured image).

Only thrown together at the Star Australian Open in June, the latter have not had anything to rave about until now and what a scalp to claim, much to the delight of their coaches and team-mates cheering and jumping in the stands at the 22-20 21-18 victory!

The first game was a see-saw battle, with neither pair able to secure a run of points to gain the ascendancy. Tellingly, it was the Koreans who kept edging ahead and were able to grab the precious first game. Nonetheless, odds would still have been on the Chinese to rebound as they traditionally do but when Shin and Chae raced to a 17-12 advantage those odds narrowed dramatically. It was not to be so easy though as Zhang and Zhao mounted a fightback and – aided by some errors from across the net – they drew level before going ahead 18-17.

At that point, Shin rose to the occasion, pressuring the Chinese with his speed and variety. For once, the World champions wilted with two successive errors sealing a rare loss.

“We focused on a lot of net play and pushing the shuttle into the back court. Zhang and Zhao are very good in mid-court and we wanted to take away that advantage from them,” explained Shin.

Meanwhile, the struggling Lee Chong Wei plummeted to his third straight early exit in a World Superseries tournament, having failed to make it past qualifying at the Victor Korea Open and losing to Lin Dan in the second round of the Yonex Open Japan. Today it was Hong Kong’s Wei Nan who dismantled the Malaysian’s lacklustre attack, 21-18 21-19, in Men’s Singles.

“Wei Nan played well. This is my third disappointing performance and I’m lacking confidence. I need to work on that. I will keep trying,” said a dejected Lee.

Minatsu Mitani of Japan again had Saina Nehwal’s number in Women’s Singles, repeating her Yonex Open Japan success against the Indian star whose season has waned since the World Superseries resumption. Reflecting on her 21-18 21-13 loss, Nehwal indicated she has been troubled by a recent hip injury which has been impeding her movement. Still, she applauded Mitani’s steely resolve, noting “she’s a good rally player who gets back everything”.

Another player with a penchant for upsets – Michelle Li – produced the goods against Mitani’s team-mate, Nozomi Okuhara; coming from behind to thwart the No. 8 Women’s Singles seed. In nervy conclusion, the Canadian clawed back from 12-19 down in the decider and had just enough left in her tank to claim a hard-fought, 8-21 22-20 26-24, triumph – shrieking and falling to the court as Okuhara netted the final shot.

“I’m so happy. I was struggling but I focused on each point and what shots I should play. I missed three match points and I was thinking ‘When is this game gonna end?’ but I finally got it done,” said the Commonwealth Games champion, playing without a coach. In Men’s Doubles, Russian partners Vladimir Ivanov and Ivan Sozonov were all over No. 5 seeds, Endo and Hayakawa, routing the Japanese, 21-10 22-20. They now meet qualifiers Liu Cheng and Lu Kai who excelled in some giant-killing of their own. The Chinese impressively condemned No. 2 seeds, Mohammad Ahsan/Hendra Setiawan of Indonesia, to an early departure, 25-23 23-21.

Some top guns, including Denmark’s Jan Jorgensen – who flirted dangerously with defeat versus Dionysius Hayom Rumbaka – scraped through to fight another day. The Men’s Singles No. 2 seed smiled at his luck as he shook hands with his Indonesian rival who seemed to have the match under control before gifting a series of points to Jorgensen’s 12-21 21-15 21-19 escape.