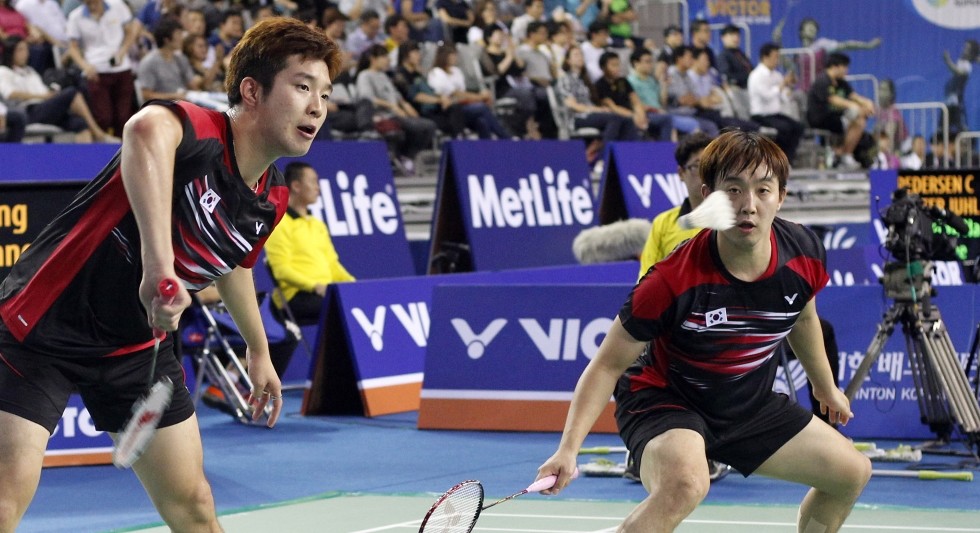 as he made the Men’s Singles final against Chen Long today.

The Indian, an underdog from the very first round – where he upset Denmark’s Viktor Axelsen – made his first World Superseries final beating Chinese Taipei’s Chou Tien Chen 21-19 21-15.

Korea had a near-perfect semi-finals day, ensuring a strong presence for tomorrow’s finals.

The home team assured themselves of the Men’s Doubles gold medal, besides having representatives in two other finals. China also stayed in the hunt for three titles despite losses in Women’s Doubles and Men’s Doubles.

Of all the finalists, Jayaram (right), world No.30, was possibly least expected to remain on Sunday contesting for the Men’s Singles title. Yet, the Indian had shown skill and tenacity in taking down opponents ranked higher than himself. Against Chou Tien Chen he continued with his careful style, keeping a tight rein on the shuttle and opening up with judicious shots that found the lines. Chou had a brief lead in the second but Jayaram then drew him into a net game at which he outplayed his opponent time and again. Denied the length to use his smashes, Chou withered even as Jayaram grew in confidence.

“I think it’s a matter of confidence; it’s a culmination of all the hard work I’ve put in over the years,” said Jayaram, who needed six months off last year due to a shoulder injury. “I executed my strategy well. Recovering from the injury obviously made me tougher. It will be hard against Chen Long… I will think about what to do, maybe have a word with (teammate) Kashyap as well, since he has beaten him twice.”

Earlier, defending champion Chen kept his date for a fourth Superseries title this year with a comfortable 21-9 21-13 result over Japan’s Kento Momota. The Danes controlled the game through the early part, dominating the front court exchanges and preventing the Koreans from getting into the rallies. The Danes frequently caught out the Koreans at the far corners and avoided the lengthy rallies that Lee and Yoo revel in. It was only in the third, when Lee and Yoo were able to break free of those constraints that they found their rhythm – Yoo in full flight at the back and Lee making the interceptions at net.

“Our bodies felt a little heavy so it was a really difficult match to play,” said Lee. “Still, I’ve played a lot of difficult matches and I was able to think that if we keep at it, we could catch up and pass them and I think that was how we were able to win. I am pretty happy with how it turned out.

“Today, they didn’t play their usual style. They were more precise and I think they were trying to use the fact that the shuttles were slow. Yoo’s smash wasn’t coming down as fast as always so they didn’t give me as many opportunities to move in and take the net and kept the rallies to the back. This wasn’t the same as the other matches we’ve played against them but because we have consistently beaten them, we remained confident and that’s how we were able to win again this time.”

“I think this match was a lot more tiring than the others I’ve played against them,” added Yoo. “We had to keep hitting and moving and expending energy and that was tiring and we didn’t always keep it going. But we had to concentrate on staying light on our feet and keep moving so we could maintain the attack.”

Sung Ji Hyun prevailed in a Women’s Singles marathon over Akane Yamaguchi. With the third game turning into a battle of attrition between the purveyors of contrasting styles, the Japanese had the advantage as she was able to keep the rallies going. At one point, Yamaguchi pushed Sung into a 60-shot rally after which the Korean appeared to run out of ideas and retreated into a reactive game. After another long rally, Sung collapsed on the floor and got up wearily after a long time. Despite being pushed through the ordeal, Sung reverted to her attacking style late in the game. With a few quick points, the Korean was able to close it out: 21-15 15-21 21-18 in 69 minutes.

Her opponent will be defending champion Wang Yihan, who made her first World Superseries final after October last year by beating compatriot Wang Shixian 21-12 21-19. Korea briefly entertained hopes of an upset in the Mixed Doubles when Ko Sung Hyun/Kim Ha Na took a game off defending champions Zhang Nan/Zhao Yunlei. However, the Chinese came back strongly and handed a mauling to the home pair in the third. Ko and Kim were left dazed as Zhao and Zhang rained winners on them: 21-15 12-21 21-10. In the other semi-final, Indonesia’s Tontowi Ahmad/Liliyana Natsir (above) were untroubled by England’s Chris Adcock/Gabrielle Adcock, 21-9 21-15.