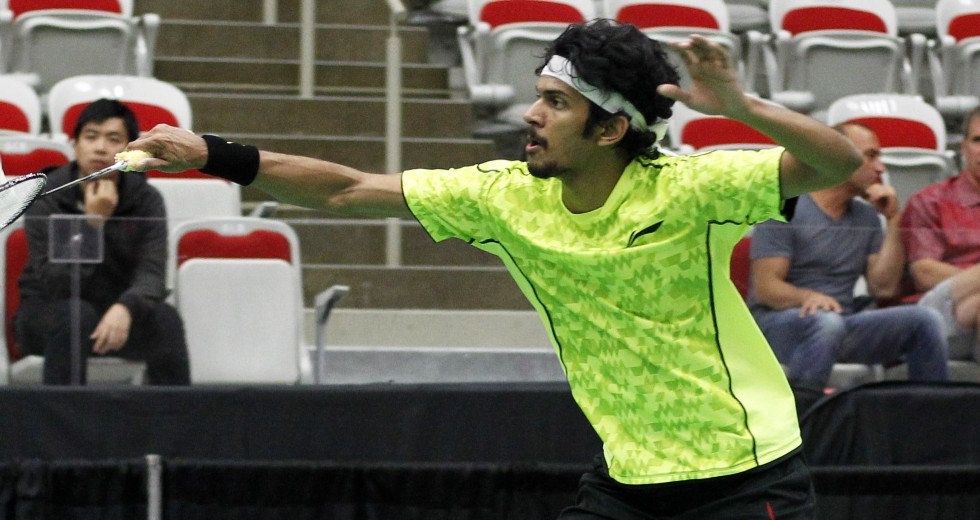 Victor Korea Open 2015 with Viktor Axelsen falling by the wayside.

The Dane, runner-up at the Yonex Open Japan last week, fell prey to India’s Ajay Jayaram in the first round, the same stage at which he had faltered in the Indonesia Open after reaching the Australian Open final.

Jayaram (featured image) was in fine fettle, darting around the court and firing winners left, right and centre as a bewildered Axelsen struggled to contain the flow of points. The Indian’s wristwork did the damage at the front court, with Axelsen unable to anticipate his deft flicks. Adding to his misery, the Dane’s length was too short, allowing Jayaram to get under the shuttle and uncork some sizzling smashes. The Dane went down in under half-an-hour, 21-15 21-15. 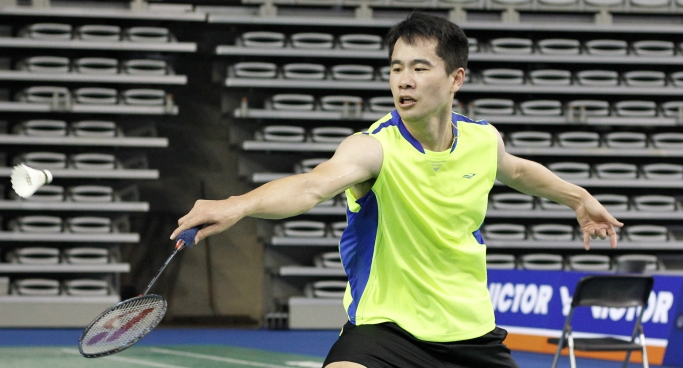 “I think he had trouble with the drift,” said Jayaram. “Once I got the first game, I was able to play well from the other end too. My movement was key: I was moving well and getting under the shuttle. I was also able to catch him with a few strokes. I lost to him badly last week, so this feels good.” 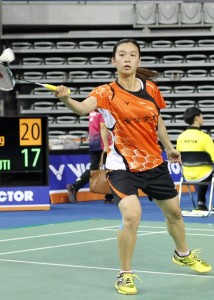 In Women’s Singles, Nozomi Okuhara and PV Sindhu reversed their fortunes against opponents they hadn’t beaten previously, to stride into the second round.

Okuhara had been one of the players in the spotlight before the TOTAL BWF World Championships in August, but crashed out in the first round to Thailand’s Porntip Buranaprasertsuk. That was Okuhara’s third loss in three matches against the Thai; now, having won her home Yonex Open Japan last week, Okuhara found Buranaprasertsuk once more in her path in the first round. With a 15-13 lead in the third game, the Thai looked to be heading for a fourth win, but Okuhara did not yield and emerged winner in 53 minutes: 21-18 19-21 21-19.

Similarly, PV Sindhu had failed in three previous attempts to solve the Ratchanok Intanon puzzle. Today the Indian was up to the task, relying on an impeccable defence to repel the variety and craft of Intanon’s attack. Sindhu had five match points at 20-15 in the second; Intanon saved all five and took the match to a decider. Trailing 3-7 in the third, Sindhu’s mind went back to the second game and her missed opportunities.

“I was nervous at the start of the third; I kept thinking of the match points I’d missed,” said Sindhu. “Then I thought, if she can fight back, so can I.”

“Intanon has good strokes; she changes the pace suddenly, and she has a crosscourt flick with which she used to catch me earlier. Today I just returned all her strokes. There were a lot of long rallies and I just kept the shuttle in the court.” 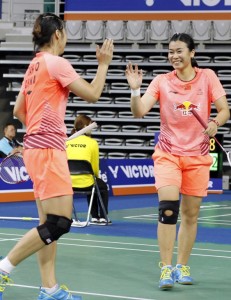 Okuhara was accompanied into the second round by compatriots Takahashi, Akane Yamaguchi and qualifier Aya Ohori, who beat Indonesia’s Lindaweni Fanetri 21-16 22-20. All four Chinese – Sun Yu, Wang Shixian, Wang Yihan and Li Xuerui – also made it, with Wang Shixian being stretched to three games by Yui Hashimoto of Japan.

Korean qualifier Kim Na Young also made the second round, where she will face compatriot Sung Ji Hyun, a 21-18 21-9 winner over Japan’s Sayaka Sato. Chinese Taipei’s Tai Tzu Ying and Hsu Ya Ching (top) were also among the winners.

World Championships Men’s Doubles silver medallists Liu Xiaolong/Qiu Zihan were blown away by Singapore Open champions Angga Pratama/Ricky Karanda Suwardi 21-14 21-12. The Indonesians didn’t put a foot wrong in the match, calmly returning their opponents’ best smashes and breaking their defence at will in a match that was expected to be closely fought.

The hardest battle of the category was fought between local hopefuls Ko Sung Hyun/Shin Baek Choel and Russia’s Vladimir Ivanov/Ivan Sozonov (above). The Russians stole the first game after staring at two game points; they nearly did the same in the second, equalling a three point deficit to make it 19-all. The Koreans had to save a match point before they equalled it at a game apiece and then cruised in the decider: 20-22 25-23 21-14.

Women’s Doubles will see the intriguing prospect of a third clash between China’s Ma Jin/Tang Yuanting and Tian Qing/Tang Jinhua (above). With a 1-1 head-to-head record, the third clash is expected to go down the wire. 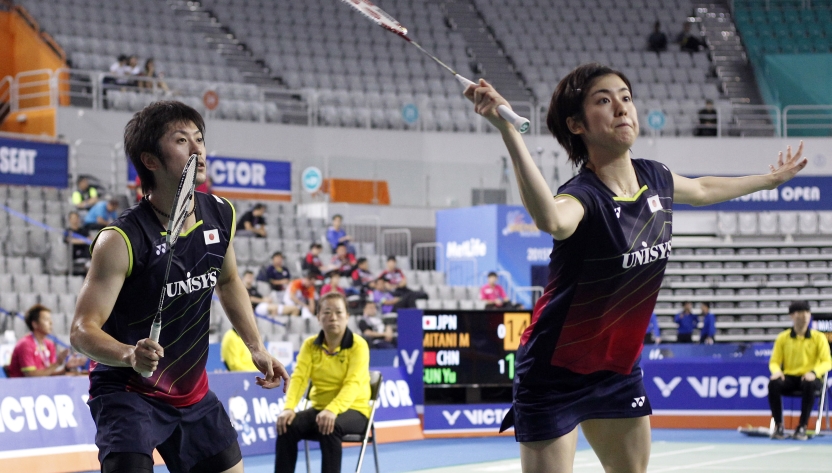