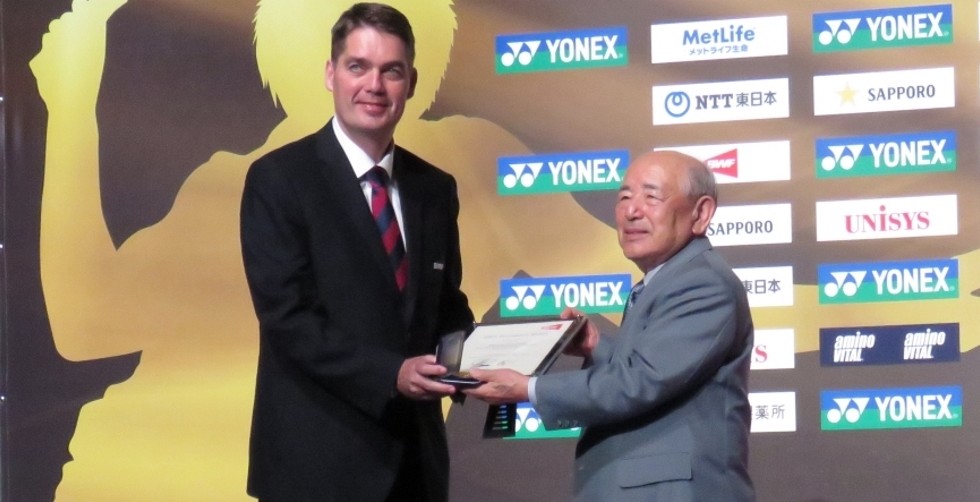 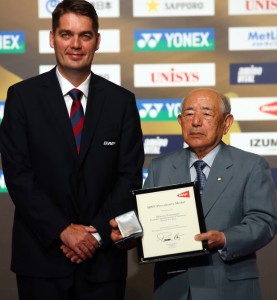 The elderly Yoneyama was presented with the medal by BWF President Poul-Erik Høyer before the start of the Yonex Open Japan 2015 semi-finals in Tokyo. Recipients of this honour, awarded to distinguished individuals or organisations who have made exceptional contributions to badminton, are nominated exclusively by the BWF President.

Yoneyama, whose family was in the woodwork industry, began his company after World War II, manufacturing wooden rackets. The company was at the forefront of technological changes in the sport, transitioning from wood to aluminium and then carbon fibre. Yonex was also successful in producing quality equipment for other sports also.

Among the early brand ambassadors for Yonex was the legendary Indonesian Rudy Hartono. Yonex’s support for players, events and organisations around the world helped the sport grow, even in areas where badminton was not previously well developed.

In his citation, parts of which were read out in the packed stadium on his behalf, Høyer paid glowing tributes to Yoneyama’s services to the sport: “It is my great pleasure today as President of the BWF, to honour a person who has made a truly exceptional contribution to the sport of badminton. The President’s Medal is a BWF award, presented by the President, to honour distinguished individuals or organisations who have made an exceptional contribution to badminton.

“Today, it is an opportunity to recognise the exceptional contribution that Mr Minoru Yoneyama has made to our sport over the last 55 years. In 1946, Minoru Yoneyama founded his first company after leaving the Japanese military. Specializing in wood products, the company went on to produce badminton rackets in 1957. 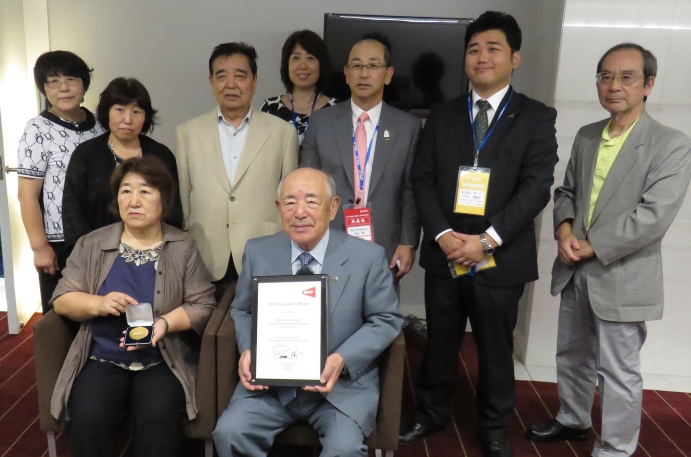 “In 1958, he started Yoneyama Company Limited. The company changed its name to Yonex Co., Ltd. in 1982, in line with its evolution as the company undertaking the production of tennis rackets, golf clubs and other sporting accessories.

“Once Minoru started to successfully produce his own brand of badminton rackets, he set out to sell his products around the world. In the early 1960s, Minoru met Erik Andersen in Denmark, where the company would obtain one of its first distributors. Minoru travelled with his interpreter to other countries such as England, Malaysia, Indonesia, and many more. He sought out regions where badminton was popular in order to distribute his rackets further around the world. 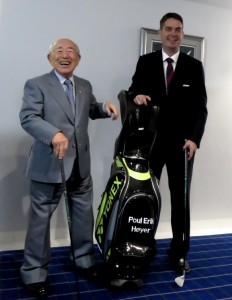 “In 1984 Yonex became the title sponsor for the prestigious All England Badminton Open Championships, and to this day, the relationship continues and this is one of the longest partnerships in the United Kingdom’s sporting history. Furthermore, Yonex has acted as the sole supplier and sole stringer for badminton since it first appeared at the 1988 Seoul Olympic Games as a demonstration sport. Yonex will continue to do so at the Rio 2016 Olympic Games.

“Also in 1988, Yonex signed a sponsorship agreement with the BWF — a partnership which has contributed greatly to the further development of badminton globally.”

Høyer also highlighted Yoneyama’s establishment of the Yonex Sports Development Foundation in Japan which provides financial support for young athletes and sporting activities in general. The foundation also rewards individuals or groups that have contributed greatly to the promotion of sports.

Following the ceremony, Yoneyama thanked the BWF President for the honour and presented him with a golf kit as a token of appreciation.