The sun continued to rise for Women’s Singles in Japan, with their 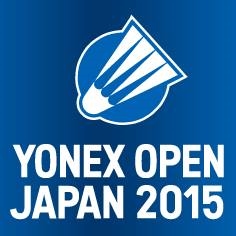 Akane Yamaguchi and Nozomi Okuhara won gripping three game battles and will contest on the morrow, which will see the second all-Japanese Women’s Singles final after 2013, when Yamaguchi beat Shizuka Uchida.

China’s Lin Dan will face Denmark’s Viktor Axelsen for the Men’s Singles crown. In the paired events, Zhang Nan, Zhao Yunlei and Christinna Pedersen will each contest two finals. Except the Women’s Singles, China ensured their presence in the other four finals.

It was Yamaguchi’s semi-final against China’s Wang Shixian that had the crowd on the edge of their seats. Just as she had in her quarter-final against Li Xuerui, the Japanese wore down Wang with a mix of fierce attacking shots punctuated by her loopy drops that forced her opponent to run the extra yard. 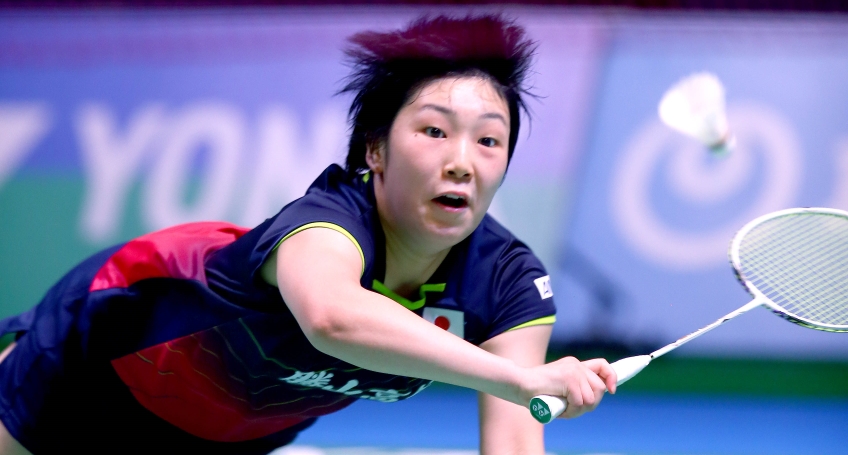 However, just as she did all week, Wang fought tooth and nail to stay in the match. Her indefatigable attitude in the face of adversity saw a gladiatorial battle unfold, with each pushing the other back and forth across the court. Yamaguchi (above), constrained by height but not by will, had to throw herself full-length time after time to keep the point going.

Wang earned a healthy lead from midway in the third, and held two match points at 20-18 after a tremendous rally. 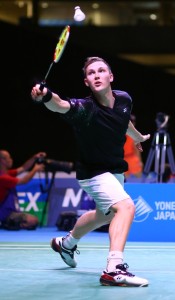 It was Yamaguchi’s serene netplay under pressure that broke Wang Shixian. The Japanese played the tightest of net shots with Wang hovering before her, unmindful of the pressure; there was no hint of self-doubt, and that helped her save match points twice more. Faced with the relentless opponent, Wang finally caved in: 21-12 15-21 26-24.

“I wasn’t in a rush to earn points,” said Yamaguchi.

“Patience was the key to winning. I wasn’t thinking of the win at all. I felt calm all the way. It was very hard for sure as my legs were tiring in the third game.”

In the second semi-final, Tai Tzu Ying (below) was let down by her inability to capitalise on numerous openings against Okuhara. The Chinese Taipei player, gifted with the greater variety of strokes and a sharper attacking game, controlled most of the rallies but the finishing touch let her down, allowing Okuhara to clamber back. A typical instance was at 18-19 in the third: Okuhara chased the shuttle throughout the rally but Tai, with her opponent at her mercy, went for too tight a net shot and lost the point.

“We are good friends. I just want to enjoy the stage with her. I believe keeping my concentration high will be the key if I have to win tomorrow.”

Viktor Axelsen (above) made his third Superseries final of the year with a clinical win over Chinese Taipei’s Chou Tien Chen, 21-19 21-13, while Lin Dan avenged his two losses this season to Indonesia’s Tommy Sugiarto, 21-17 21-17.

“I’ve lost in three Superseries so far; I hope it will be fourth time lucky,” said Axelsen. 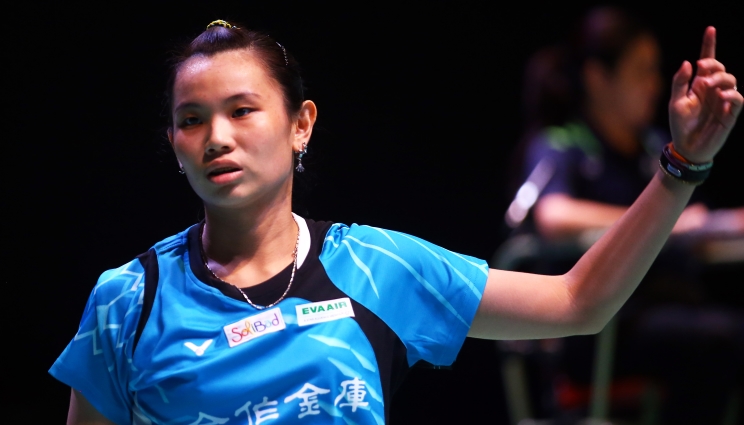 “Of course I’m happy to be in two finals. It’s going to be difficult but I’ll be ready for tomorrow,” said Pedersen.

“We had a really good period before the World Championships. We are still benefitting from that. We did a lot of weight training and then a lot of speed. We had a new physical trainer, we are doing a lot of footwork (drills) on court, and that has helped us.”

She will face a familiar opponent in Zhao Yunlei, in both the Women’s Doubles and Mixed Doubles finals. Zhao’s impressive run with new partner Zhong Qianxin continued, as they beat Korea’s Chae Yoo Jung/Kim So Yeong 21-16 21-13.

Zhao and Zhang Nan (above) were just as dominant over Korea’s Ko Sung Hyun/Kim Ha Na in the Mixed Doubles semi-final, pocketing it 21-18 21-17, to enter their sixth major final this season.

Zhang Nan will also feature in the Men’s Doubles final with Fu Haifeng. The Chinese duo beat Japan’s Hiroyuki Endo/Kenichi Hayakawa 21-15 21-14 and will hope to get their first Superseries title this year when they take on Lee Yong Dae/Yoo Yeon Seong (below). The Koreans had a comfortable win over Singapore Open champions Angga Pratama/Ricky Karanda Suwardi, 21-16 21-16. 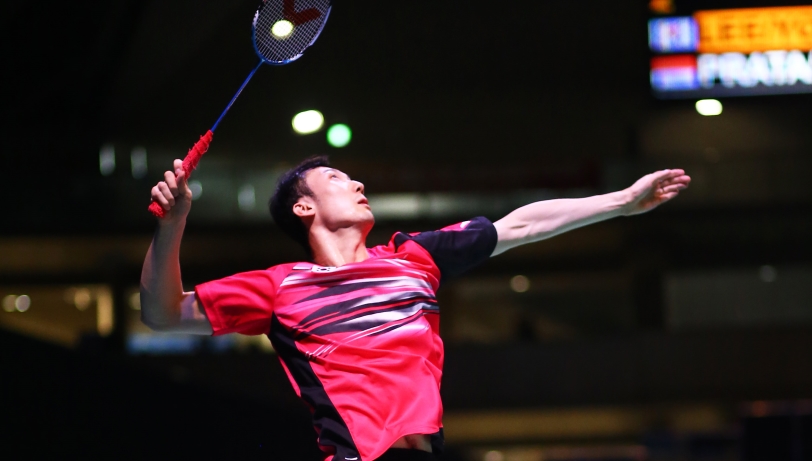