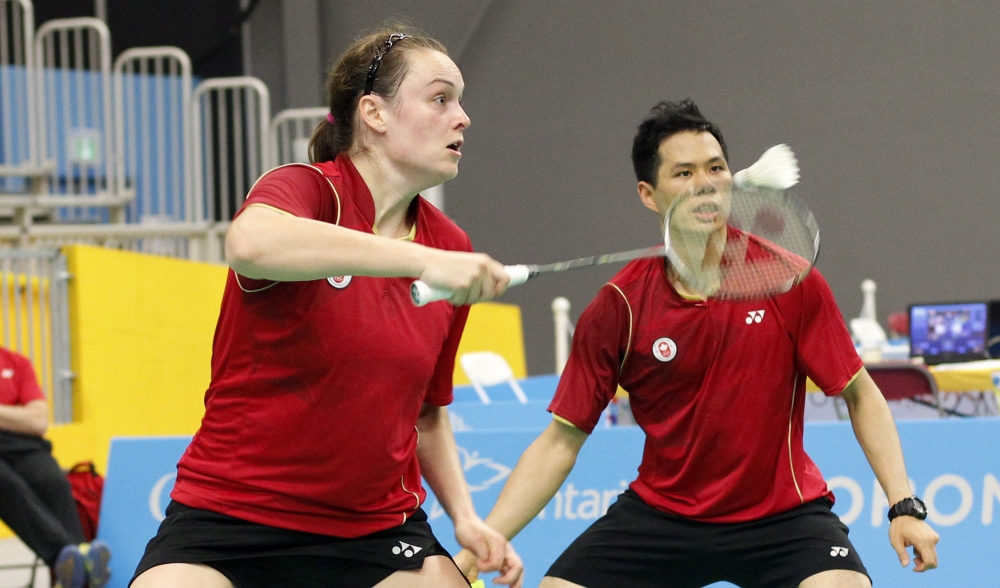 Brazil’s Lohaynny Vicente and Canada’s Alex Bruce made the semi-finals of both their doubles events at the Pan Am Games 2015 in Toronto yesterday. After Lohaynny and Luana Vicente (below) dismissed the challenge of Dominican Republic’s Bermany Polanco Munoz/Daigenis Saturria in the Women’s Doubles quarter-finals, 21-8 21-10, Lohaynny teamed up with Alex Yuwan Tjong for the Mixed Doubles quarter-final against Jamaica’s Gareth Henry/Katherine Wynter. After a smooth first game, the Brazilians had to fight harder in the second, but recovered from 16-17 to take the next five points: 21-11 21-17.

The Vicentes take on Alex Bruce/Phyllis Chan in the Women’s Doubles semi-finals, while in the other half, USA’s Eva Lee/Paula Lynn Obanana face Canada’s Michelle Li/Rachel Honderich. The other half will see USA’s Phillip Chew/Jamie Subandhi take on Peru’s Mario Cuba/Katherine Winder (below). Canada’s Andrew D’Souza (below) set up a Men’s Singles semi-final against Pan Am continental champion Osleni Guerrero of Cuba. D’Souza needed only 21 minutes to get past USA’s Sattawat Pongnairat, 21-14 21-10. Guerrero enjoyed a straight-games win over Mexico’s Lino Munoz, while in the other half, Guatemala’s Kevin Cordon weathered a strong challenge from Brazil’s Ygor Coelho de Oliveira; he next faces USA’s Howard Shu, who prevailed in three games over Brazil’s Daniel Paiola.