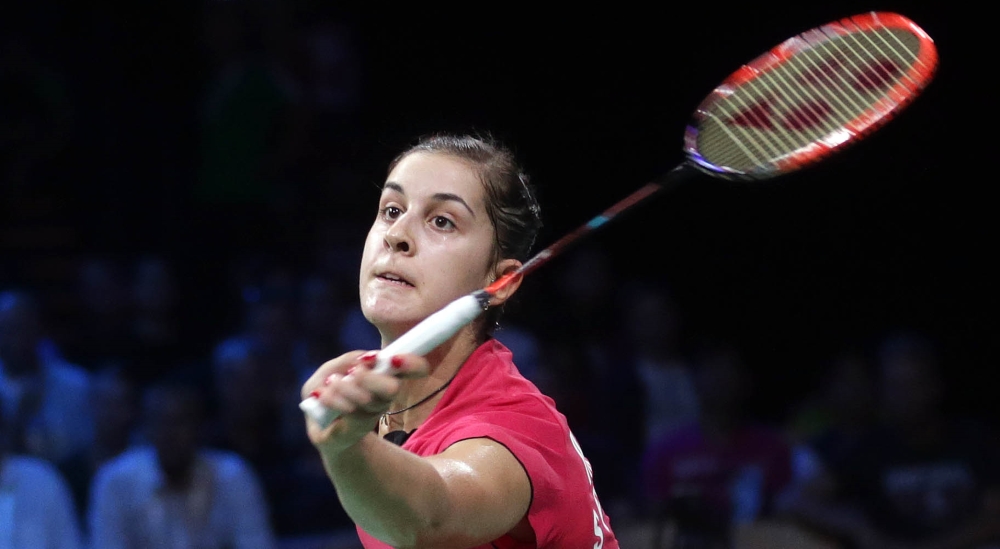 Carolina Marin might still be chasing the No.1 spot in the world rankings but the Spaniard is already out front in the 2015 BWF Destination Dubai Rankings. With a third of this year’s MetLife BWF World Superseries circuit completed, the lethal left-hander (featured image) leads the Women’s Singles standings, having won two World Superseries Premier titles and making the semi-finals of the India leg of the series. An impressive 13-1 record makes Marin one of the favourites to qualify for the year-ending event which she missed last year. “One of my goals is to be in Dubai for the Dubai World Superseries Finals,” said Marin, following her victory at the Maybank Malaysia Open.

“I could not go last year and I was disappointed. I wasn’t at my best last year. I know it’s an important tournament, like the World Championships. I will try to get the title this time.”

The biggest name to miss out last year was Lin Dan in Men’s Singles. The five-time World champion expressed his keenness to qualify but, having made his comeback only in April 2014, he just didn’t have enough time to accumulate the required ranking points. This year, going by current form, he should make the cut. The former champion is fourth in the rankings, behind compatriot Chen Long (1), Kento Momota (Japan, 2) and Jan O Jorgensen (Denmark, 3).

Others in the top eight are Viktor Axelsen (Denmark) and India’s K Srikanth and HS Prannoy (above).

Men’s Doubles defending champions Lee Yong Dae/Yoo Yeon Seong (Korea) have had mixed luck this year and are currently No.10. Heading the list are Japan’s Hiroyuki Endo/Kenichi Hayakawa, followed by Yonex All England champions Mathias Boe/Carsten Mogensen and Mads Conrad-Petersen/Mads Pieler Kolding (both Denmark). Malaysia Open champions Mohammad Ahsan/Hendra Setiawan of Indonesia are at No.4, Yonex-Sunrise India Open champions Chai Biao/Hong Wei (China) are at No.5 and Zhang Nan/Fu Haifeng (China) are at No.6. Indonesia’s Angga Pratama/Ricky Karanda Suwardi (right), surprise winners of the OUE Singapore Open, have jumped eight places to No.7. Chinese Taipei’s Lee Sheng Mu/Tsai Chia Hsin are at No.8 with a 7-3 win-loss record.

Chinese twins Luo Ying and Luo Yu, who celebrated their first World Superseries title in Malaysia, are ahead of Japan’s Misaki Matsutomo/Ayaka Takahashi in the Women’s Doubles rankings. Two other Chinese pairs, Ou Dongni/Yu Xiaohan (below) – thanks to their Singapore Open triumph – and veterans Wang Xiaoli/Yu Yang follow closely. Defending champions Zhang Nan/Zhao Yunlei have been in irresistible form over the last few months. Boasting three Mixed Doubles titles this year, the Chinese have a 15-0 record and a tally of 31,200 points – more than 7,700 more than Indonesia’s Tontowi Ahmad/Liliyana Natsir.

Indonesia’s Praveen Jordan/Debby Susanto are at No.6 and China’s Xu Chen/Ma Jin at No.7. Interestingly, there is a three-way tie at No.8, with Korea’s Ko Sung Hyun/Kim Ha Na, Denmark’s Mads Pieler Kolding/Kamilla Rytter Juhl and England’s Chris Adcock/Gabrielle Adcock (below) all locked on 17,140 points.