The fourth stop on the MetLife BWF World Superseries circuit, the OUE Singapore Open, has all the ingredients for an exciting week ahead. With highly competitive draws, the crowd can expect plenty of thrilling moments over the next few days.

In Men’s Singles, China’s Chen Long and Denmark’s Jan O Jorgensen head the opposite ends of the draw, promising a replay of their All England final clash that went Chen’s way. A number of eventualities could however thwart that possibility. Chen has the easier draw, and is unlikely to face danger before the semi-final. Korea’s Son Wan Ho, who beat him in Hong Kong last year, is in Chen’s half and could be expected to trouble him, assuming he doesn’t succumb early.

Jorgensen, on the other hand, might expect a second round battle with his vanquisher in India, HS Prannoy. The quarter-final might feature either Japan’s Kento Momota or French Open champion Chou Tien Chen (Chinese Taipei). If Jorgensen survives that round, India Open champion Kidambi Srikanth (India) or compatriot Viktor Axelsen might await him in the semi-final.

The Women’s Singles draw does not feature the three players who have been in the news lately for their fluctuating fortunes atop the world rankings: India’s Saina Nehwal, China’s Li Xuerui and Spain’s Carolina Marin. In their absence, China’s Wang Shixian looks the strongest contender for the title, but she will probably have to battle past Japan’s Akane Yamaguchi or Korea’s Bae Yeon Ju in her quarter. Another meeting with Japan’s Nozomi Okuhara seems probable in the semi-finals (their last match, at the Maybank Malaysia Open, turned out to be a marathon 111-minute affair). 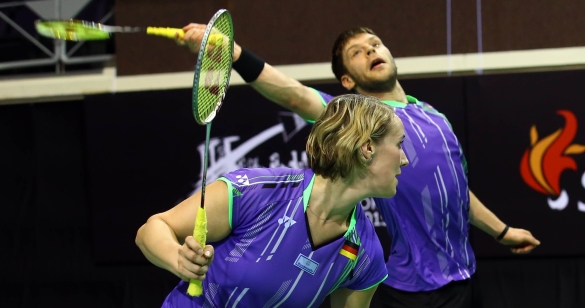 The top half of the draw features Chinese Taipei’s Tai Tzu Ying, China’s Wang Yihan and Thailand’s Ratchanok Intanon. The dark horse in this half is USA’s Beiwen Zhang, who returns to the country she used to turn out for earlier.

Men’s Doubles top seeds Lee Yong Dae/Yoo Yeon Seong were desperately close to winning last week’s Maybank Malaysia Open. The No.1 pair appear to have a comfortable draw, with their toughest challenge likely in the semi-finals, possibly in the form of Japan’s Hiroyuki Endo/Kenichi Hayakawa or Denmark’s Mads Conrad-Petersen/Mads Pieler Kolding. Their closest rivals, Mohammad Ahsan/Hendra Setiawan, however, have a minefield ahead of them, starting with the first round against Malaysia’s Goh V Shem/Tan Wee Kiong. Other challengers in their half include China’s Chai Biao/Hong Wei, Fu Haifeng/Zhang Nan and Chinese Taipei’s Lee Sheng Mu/Tsai Chia Hsin.

Women’s Doubles will see a new Chinese partnership: Ma Jin teaming up with Huang Yaqiong. Another relatively new combination, Tian Qing and Xia Huan, have been persisted with. China have the strongest contenders in this category: apart from the two pairs mentioned above, they have Yu Yang/Wang Xiaoli and Ou Dongni/Yu Xiaohan. 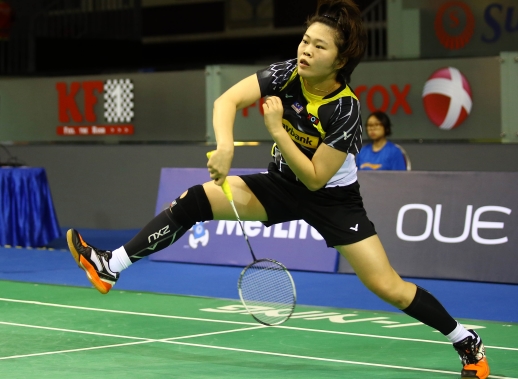 The only other pairs reckoned to have a shot at the title are India Open champions Misaki Matsutomo/Ayaka Takahashi (Japan) and Korea’s Jung Kyung Eun/Chang Ye Na, runners-up at the Malaysia Open last week.

China’s Zhang Nan/Zhao Yunlei, who have swept all before them over the past nine months (their last defeat was at the Indonesia Open in June last year) are favourites once again for the Mixed Doubles title in Singapore. They’re expected to run into defending champions Tontowi Ahmad/Liliyana Natsir (Indonesia) in the semi-finals. The lower half of the draw is more unpredictable, with China’s Xu Chen/Ma Jin, Germany’s Michael Fuchs/Birgit Michels, England’s Chris Adcock/Gabrielle Adcock and China’s Lu Kai/Huang Yaqiong.

The OUE Singapore Open was in the news earlier this year for placing ninth in the Association Internationale De La Presse Sportive (AIPS) poll for the world’s Best Press Facility in 2014. It was the first time a badminton tournament broke into the top ten of this annual poll run by the international organisation for sporting media to judge press facilities at sporting events.