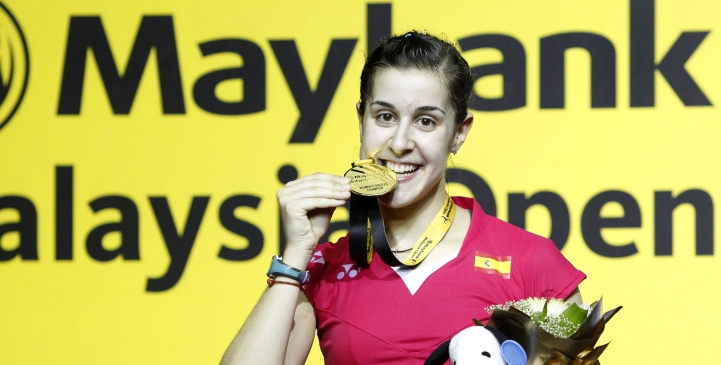 Open final to grab her second World Superseries Premier title of the year.

Marin’s victory over Li Xuerui meant that China had to be content with three titles, after Luo Ying/Luo Yu (Women’s Doubles), Zhang Nan/Zhao Yunlei (Mixed Doubles) and Chen Long (Men’s Singles) had triumphed earlier. The tournament closed with a dramatic Men’s Doubles final between Mohammad Ahsan/Hendra Setiawan and Lee Yong Dae/Yoo Yeon Seong, with the Indonesians prevailing in a test of nerves.

Marin’s match against Li was nearly identical to the BWF World Championships final. Li had a lead in the third game but Marin staged an escape act from 9-14 down, reeling off eight points in a row. The Spaniard showed great nerve at critical stages, daring to go for the lines or playing tight net shots under Li’s nose; the Chinese withered under Marin’s aggressive play in the closing stages to fall 19-21 21-19 21-17. 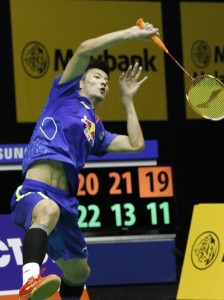 “I was nervous in the beginning. The crowd today was amazing. I saw some Spanish flags in the audience. When the crowd supports you, it just gives you more power,” said Marin.

Li’s narrow win over India’s Saina Nehwal in the semi-finals and her loss to Marin in the final reflected the close race between the top three players in the world. Marin said she was focussing on her performances and not on the No.1 spot.

“My goal this year was to win the All England and to play well at every tournament. If I play well, a high ranking will follow. Ranking is secondary. I just take it match by match.”

The Men’s Singles final between Chen Long and Lin Dan didn’t quite live up to expectations, especially considering that Lin had shown glimpses of his brilliance late in his semi-final. The two gladiators started out cautiously; both content to outmanoeuvre the other rather than go for the quick kill.

Lin was sharp in the first game and he kept his nose ahead, but appeared to struggle in controlling the shuttle as the match progressed. Chen gave his opponent few openings; for the most part, he employed the soft touch rather than the hammer blow. There was a brief period in the decider when it looked like Lin would repeat his semi-final comeback: he narrowed a 3-12 deficit to 8-12, but the momentum once again deserted him and Chen Long wrapped up the match 20-22 21-13 21-11.

“I played the critical points well in the first game despite losing it,” said Chen. 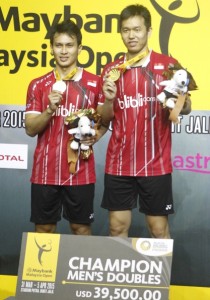 “It was a difficult match. There was a drift on and off, which is understandable because Malaysia is a hot country. Whatever the match situation, Lin is very calm on court and never succumbs to pressure. That’s why he is such a difficult opponent.”

Fortunes in the Men’s Doubles final swung from one end to the other. Ahsan and Setiawan had four match points, but Yoo and Lee returned from the dead winning five straight rallies to hold a match point of their own. As he had done expertly all match long, Setiawan finally conjured a winner into a vacant corner: 14-21 21-15 23-21.

The pairs fought on level terms through most of the first game, with Chang’s steep left-handed smashes in particular troubling the Chinese. Once they edged past, however, the Luo twins steadily increased the distance. The turning point was at 8-5 in the second – the Koreans tried every trick in the book, but the shuttle kept getting back, until the Chinese fired a winner to complete a 103-stroke rally. That took the fight completely out of Jung and Chang and their opponents ran away with the match.

“It means a lot. It’s a breakthrough at the World Superseries level, but we still have a lot to learn from our seniors.” 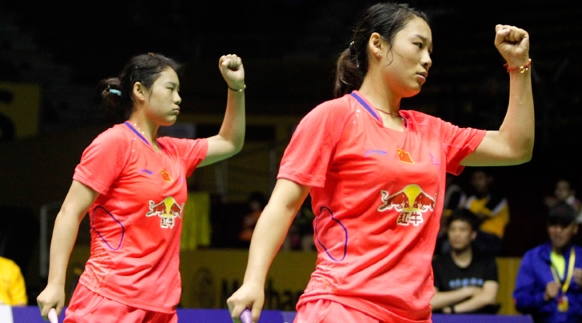 Two moments in the Mixed Doubles final showed why Zhang Nan and Zhao Yunlei have enjoyed near-total dominance over compatriots Xu Chen and Ma Jin. The difference was Zhao, who not only controlled the forecourt, but also smashed with venom to split the defence of her opponents. A steep slice by Zhao made it 12-all in the second game; match point was won when Zhao smashed at Xu Chen who was unable to retrieve.

Asked about the 19-2 record they now enjoy over Xu/Ma, Zhang replied that it had never occurred to them.

“We never thought about this record. We didn’t notice that we have won so many times. It’s a bit awkward when you play your own teammates in the final. Our performance has been good over the last few months and we have managed to maintain our form. We hope to keep going.” 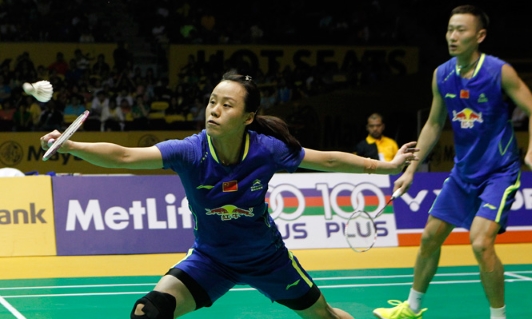