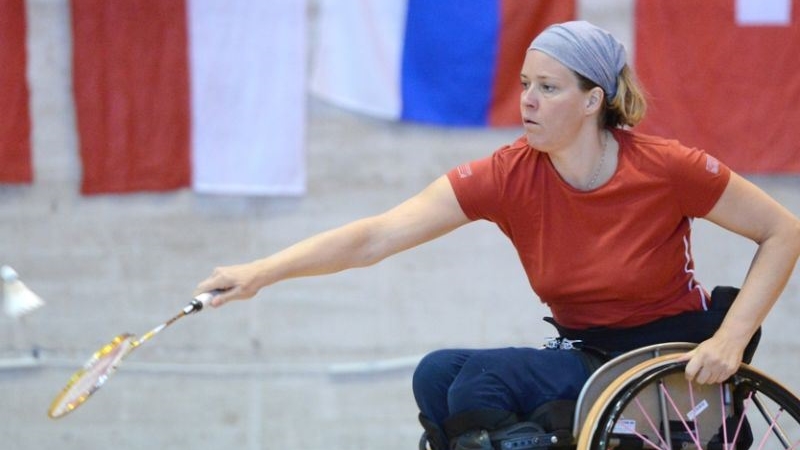 In the singles final she beat No.2 seed Valeska Knoblauch of Germany 21-7 21-9 in 25 minutes while teaming up with Russia’s Liliia Prokofeva – whom she defeated in the singles semi-finals – to win Women’s Doubles following a round-robin competition. Knoblauch and her compatriot Elke Rongen took silver.

For her third gold, Suter-Erath was partnered by England’s Martin Rooke as they outgunned rivals in the WH1/WH2 Mixed Doubles category. Again it was Knoblauch who was on the losing end as she and Young-Chin Mi, also of Germany, fell 21-12 21-12. Coombs (above) followed up his 15-21 21-9 21-19 victory in SS6 Men’s Singles (beating top seed and England team-mate, Andrew Martin) with success in SS6 Men’s Doubles. He and compatriot Jack Shephard won all three matches in round-robin battle without dropping a game to finish ahead of Martin and Isaak Dalglish, who won two of their three fixtures. Meanwhile, Wandschneider wrested titles in WH1 Men’s Singles and WH1/WH2 Men’s Doubles. Ironically, the top seed ousted his doubles partner, David Toupe of France, to win the singles (21-9 21-13). In doubles, the German-French pair (below) got past English rivals, Rooke and Connor Dua-Harper, 22-20 21-12, to lift the title. Asia and in particular Malaysia was well represented by Bakri Omar and Cheah Liek Hou. The latter showed his class in SU5 Men’s Singles and Men’s Doubles, winning gold in both. In the singles final, he overcame Colin Kerouanton of France, 21-17 21-6, and joined up with fellow Malaysian, Hairol Fozi Saaba, to triumph versus James Binnie (England)/Mark Modderman (Netherlands), 21-14 21-14, in the doubles showdown. Sarkar also copped a second silver in SL3/SL4/SU5 Mixed Doubles with Parul Dalsukhbhai Parmar while celebrating gold in SL3 Men’s Singles. The No.2 seed in the latter event, Sarkar got the better of top seed, Daniel Bethell – 21-11 8-21 25-23 for the gold medal. Parmar lost the SU5 Women’s Singles gold to Denmark’s Julie Thrane (below), 21-9 21-13.