disaster before pulling themselves up and into the quarter-finals of the Maybank Malaysia Open today.

The Danes, champions here in 2013 and runners-up last year, have had trouble in recent times against China’s young pairs. Trailing 8-14 in the deciding game against Lu Kai/Huang Yaqiong, the spell appeared to continue, but the Danes quickly made the necessary adjustments to stop the run of points and ensure a narrow victory at 21-15 15-21 21-19 in 72 minutes.

The Danes acknowledged that it was the crowd that spurred them on.

“We were struggling in the first set. We have some happy memories from this stadium, and once again Malaysia was with us. We’re very happy for that,” said Nielsen. 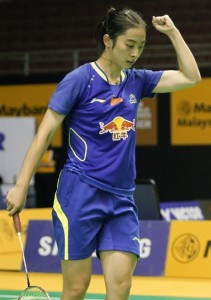 “We love to be here. The fans support us. We like to be in this city. It’s warm, it’s nice for us. It’s easy to feel good on court. That’s the reason we have so many good memories in Malaysia,” added Pedersen.

“We were struggling and the Chinese played really good, especially in the second and early part of the third game. We couldn’t find the right way to score when we were attacking, they have a really good defence. We talked about changing some small things and that succeeded, I think that was a last call.”

The Danes run into their India Open vanquishers Liu Cheng/Bao Yixin (7) next and admitted it was getting tough against China’s line-up of young talent.

“We know China is a strong badminton team and we know they have some strong youngsters coming up. It is hard for us to keep them behind us but we’re trying our best and today we succeeded. They have Zhang Nan/Zhao Yunlei and Xu Chen/Ma Jin, and all the youngsters. Every time we play the Chinese we know we need to be 100 percent,” said Pedersen.

“They’re not all the same style, but they know how to play Mixed Doubles, I can tell you that. They have a good girl at the net and a strong guy at the back and he’s really moving well. No matter who you’re playing from China, if you don’t have speed in your legs you can’t beat them.”

The Danes were joined in the quarter-finals by other seeded pairs such as China’s Zhang Nan/Zhao Yunlei (1) and Xu Chen/Ma Jin (3), Indonesia’s Tontowi Ahmad/Liliyana Natsir (4) and Korea’s Ko Sung Hyun/Kim Ha Na (6).

Women’s Singles top seed Li Xuerui had a doughty challenger in Akane Yamaguchi. The young Japanese stonewalled everything that Li threw at her, but a couple of errors in the final stretch proved costly and she went down 21-16 10-21 21-17. The quarter-finals will see Li take on compatriot Wang Yihan. Other Chinese who made the last-eight included Sun Yu, who survived a strong challenge from USA’s Beiwen Zhang, and Wang Shixian, a rather comfortable winner over Thailand’s Porntip Buranaprasertsuk. The biggest upset in the category was Hong Kong qualifier Cheung Ngan Yi’s defeat of No.4 seed Sung Ji Hyun (Korea), 21-18 12-21 21-12. Cheung next plays Spaniard Carolina Marin.

China also had a good day in Men’s Singles. Top seed Chen Long overpowered India’s Kashyap Parupalli, while No.5 seed Lin Dan was troubled in patches by another Indian, HS Prannoy, who committed far too many errors to stretch the Chinese great. Wang Zhengming and Xue Song too made the quarter-finals.

Among the most entertaining matches of the day was Lee Sheng Mu/Tsai Chia Hsin’s three-game win over Denmark’s Kim Astrup/Anders Skaarup Rasmussen. The No.3 seeds from Chinese Taipei prevailed 19-21 21-16 21-18 in just over an hour.