India had a perfect final day at the Yonex-Sunrise India Open, with local heroes Kidambi Srikanth and Saina Nehwal capturing the singles titles.

The finals followed contrasting patterns. Nehwal was virtually in no doubt during her 49-minute rout of former champion Ratchanok Intanon (Thailand); Srikanth had a more difficult path against Viktor Axelsen before the Dane suffered a meltdown in the third.

Nehwal entered to a thunderous ovation in a packed stadium. The new No.1 was authoritative from the beginning, picking up near-winners from the deft wrist of her opponent and forcing her into committing errors. Her athletic retrievals contrasted with Intanon’s leaden-footedness; the Thai was perhaps feeling the after-effects of her marathon semi-final.

“I was picking up her most difficult shots and I could sense that she was getting frustrated. I 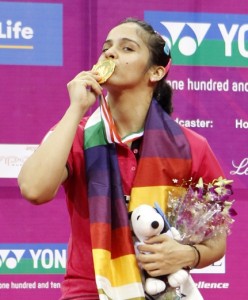 expected a tough final. Now that I’ve won the India Open, a burden is off my shoulders. I finally did it. I’ve struggled four times before. I surprised myself by the way I played. My form today was even better than yesterday.”

Srikanth’s match against Axelsen promised a thriller. The clash of attacking styles produced an exciting contest to begin with, with both Axelsen and Srikanth unleashing their big smashes at the first opportunity.

“I didn’t want him to have a big lead at the mid-game interval. I pulled off whatever I tried today.”