Axelsen gave himself a shot at a first-ever BWF World Superseries title by making the final, but the Dane didn’t look too pleased as his semi-final opponent Tommy Sugiarto (Indonesia) retired due to a back injury while trailing in the second after having won a close first game.

“I was so fired-up in there and it got over so quick, I didn’t realise it was over,” said Axelsen.

“I hope he’s okay. It wasn’t a fun way to win. We played a good match… but I feel empty right now.” 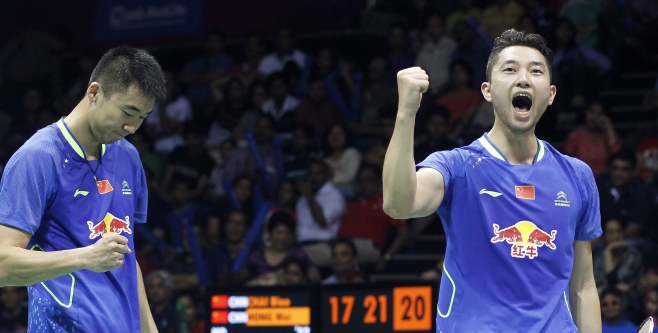 Asked on how his previous World Superseries final had taught him, Axelsen said he was more mature.

“I have a lot of experience already. It’s fun to play these big occasions. That’s what we play for. Srikanth is good but I’ll have my running shoes on and I’ll be ready.”

Srikanth made it a perfect day for hosts India, as he ensured a second Indian presence on finals day after compatriot Saina Nehwal had accomplished her job.

The Indian, who had survived a tremendous three-setter in the semi-final, showed no signs of weariness as he walloped China’s Xue Song 21-16 21-13.

Both Pedersen and Bao Yixin fell in the Women’s Doubles semi-finals. Bao and Tang Jinhua lost a close battle to compatriots Luo Ying/Luo Yu 29-27 21-19, while Pedersen/Kamilla Rytter Juhl were edged out by Japan’s Misaki Matsutomo/Ayaka Takahashi, 21-15 17-21 22-20.