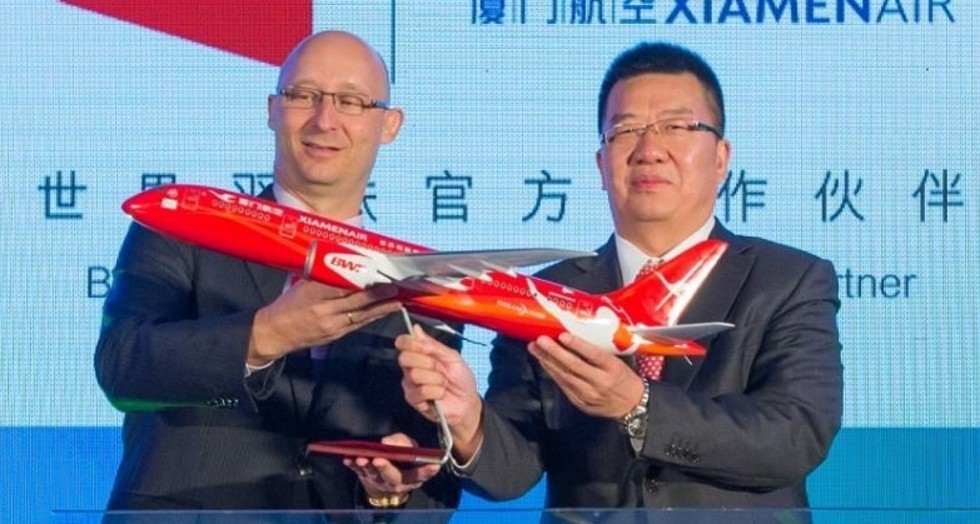 Xiamen Airlines has launched its official partnership with the TOTAL BWF World Championships in Jakarta with a range of special travel packages to entice more badminton fans to attend the BWF Major Event in August. Package” plus the creation of badminton souvenirs as giveaways.

Xiamen Airlines will be the official airline partner for the TOTAL BWF World Championship 2015 in Jakarta, Indonesia. This is the first time BWF has inked an officially partnership with an airline and both parties will engage in a “Fly with Passion” journey designed to reap mutual positive developments and benefits.

Deputy General Manager of Xiamen Airlines, Zhao Dong, said this strategic partnership brings the best resources of both BWF and Xiamen Airlines together in achieving their respective ambitions of getting more people to play and watch badminton and having more passengers on board Xiamen Airlines flights. and to more than one billion viewers. This is the first time Xiamen Airlines is using a top sporting tournament as a form of brand exposure promotion and they look forward to combining the resources of both BWF and Xiamen Airlines to create wider brand awareness for the airline.

BWF Secretary General, Thomas Lund, expressed great admiration for Xiamen Airlines’ many superb achievements during its 30-year history, now making it a heavyweight in the airlines industry. Additionally, he said BWF looks forward to the new partnership and ensuring a fulfilling relationship for both organisations.

Xiamen Airlines and BWF then exchanged corporate gifts, witnessed by an audience including specially invited guests such as Sydney 2000 Olympic badminton Men’s Singles gold medalist, Ji Xinpeng of China. The partnership logo was also unveiled, showing a strong synergy between BWF’s logo which is shaped like a shuttlecock and Xiamen Airline’s Egret design logo. The partnership logo symbolises the vitality of sport and has a modern, international look.

Badminton is one of the most popular sports in Asia especially in South East Asia. Since 2000, 17 of the 27 editions of BWF World Championships, BWF Thomas & Uber Cup Finals and BWF Sudirman Cup have been held in Asia which aligns very closely with Xiamen Airlines’ key markets.

Xiamen Airlines is a member of the Sky Team Airline Alliances and in 30 years of development has worked towards “modernization, corporatization and internationalization” as its key business strategy. Xiamen Airlines’ fleet are all Boeing and to date they have 127 Boeing planes, annual passenger turnover of more than 20 million, total company assets worth more than RMB 40 billion and more than 300 international and domestic flight routes. Having recently purchased six (6) Boeing Dreamliner planes, Xiamen Airlines will be expanding its international route to Europe, the Americas and Australia.

BWF is the international governing body of the sport of badminton, recognised by the International Olympic Committee. The purpose and objectives of BWF include regulating, promoting, developing and popularising the sport of badminton throughout the world and organising, conducting and presenting international events at the highest level. The Badminton World Federation (BWF) has its headquarters in Kuala Lumpur, Malaysia, with 182 member associations worldwide.

Being the first airline operated in the course of modern enterprise in China, Xiamen Airlines Co. Ltd was established on 25th July, 1984 jointly by Civil Aviation Administration of China and Fujian Provincial Government. The shareholders of Xiamen Airlines are China Southern Airlines Co., Ltd., Xiamen C & D Corporation Limited and Jizhong Energy Resources Co., Ltd. with 51%, 34% and 15% shares respectively. The IATA designator of Xiamen Airlines is “MF”, and the corporate logo is “Soaring Egret in the Blue Sky”.