The race for the world Women’s Singles No.1 ranking entered its home stretch today at the Yonex-Sunrise India Open, with Saina Nehwal and Carolina Marin making the semi-finals.

With current No.1 Li Xuerui of China sure to lose her top ranking next week after a long reign, 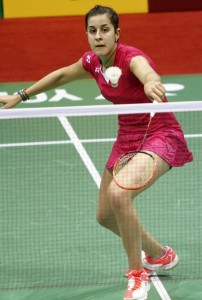 the badminton world is abuzz speculating who her immediate successor will be. Nehwal is favoured to seize the coveted position – only a semi-final loss tomorrow followed by Marin’s title win can deny her this historic moment in the spotlight.

That an Indian and a Spaniard are in contention makes this immensely significant for badminton – both countries have never been badminton powers. India in the pre-Nehwal years was known primarily for its Men’s Singles players.

Spain has never had top-level players in any category until 21-year-old Marin who has already announced herself on the big stage by sensationally snatching the Women’s Singles title from Li at the BWF World Championships last August. Earlier this month, Nehwal (featured image) was on the receiving end of one of Marin’s formidable comebacks in the final of the Yonex All England Championships.

This afternoon, Nehwal was at ease during her 21-15 21-12 semi-final destruction of Indonesia’s Hana Ramadhini, but Marin had a far tougher fight versus Japan’s Nozomi Okuhara, finally prevailing 21-15 17-21 21-15, to maintain her interest in the battle for the No.1 spot.

China have dominated the Women’s Singles ranking over decades, with few interruptions. The last non-Chinese woman to be world No.1 was Denmark’s Tine Baun in December 2010.

Both contenders however acknowledge that becoming No.1 is but one step in a long journey.

“I want to be the best,” stated 25-year-old Nehwal, already a seasoned campaigner in the sport.

“It’s not about the ranking; it’s about being consistent. Li Xuerui is injured. You can’t ignore the fact that she’s the best player in the world, but she’s been injured over the last few months. When she comes back she will be strong. The Chinese will come back and they will be ready for us.”

How does she feel now she is close finally to achieving a dream that every player cherishes?

“Everybody dreams of winning the Olympics or the BWF World Championships. I’m one of them. But I want to be relaxed, enjoy my game. Becoming No.1 is a good thing. If it’s in my destiny, it will happen.”

Marin acknowledged that getting to No.1 was one of her eventual goals, but her primary aim this season is to stay in the top five.

“I don’t want to think about the ranking. I just want to think match by match. Maybe Saina will be No.1 next week. I have a tougher semi-final,” noted the No.2 seed who faces Thailand’s Ratchanok Intanon for a place in Sunday’s final.

Nehwal, who will be up against Japan’s Yui Hashimoto tomorrow, put things in perspective when she added, almost as an afterthought: “It’s not just about being No.1… I feel blessed that I’m in the top five.

“How many players go through their careers being No.20 or No.30!”