moment, as he beat title favourite Lin Dan in the quarter-finals of the Yonex-Sunrise India Open today.

Sugiarto Jr revealed that he had been working with his father Icuk – World Champion in 1983 – for the last two months after he decided to go independent of the national team.

“His training is harder, physically,” said the soft-spoken Tommy.

Sugiarto showed plenty of stomach for the fight. He played at a high pace throughout, chasing all of Lin’s shots, and stayed stable during the pressure points. 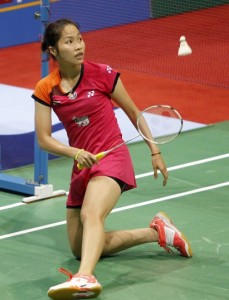 Lin deployed the same style that he has in recent months – a style dominated by flicks and pushes, only sparingly using his feared jump smash. Despite equalling a first-game deficit, Lin was a step behind in the decider and had to play catch-up throughout the game; Sugiarto, on the other hand, hustled for every point and went down on his knees for a long time after the final point was won: 21-17 15-21 21-17.

“Lin Dan is a superstar and so popular here; everybody was cheering for him. I had to concentrate on every point. I just had to keep my faith in myself. I spoke to my father yesterday and he told me to believe in myself.

“I felt that Lin was not able to focus on a few points. He has changed his style now, but he is still a special player. He is a legend.” 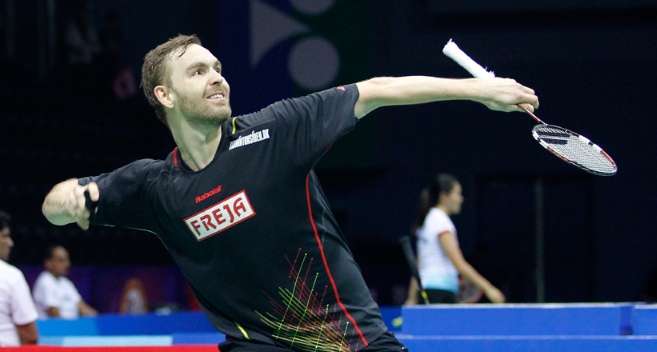 Srikanth’s win over Japan’s Takuma Ueda was an epic contest and one of the best matches of the tournament so far. Each outshone the other in tenacity: Ueda saved five match points in the second before equalling at a game apiece; Srikanth had a 15-9 lead in the third but saw Ueda steadily chipping away at it until there was just a point’s difference at 19-18. The Indian kept his nerve to pull away: 21-15 23-25 21-18.

Srikanth was the lone Indian out of three to make the semis; Gurusaidutt was beaten by Xue Song, while HS Prannoy fell in a blistering battle to Axelsen. 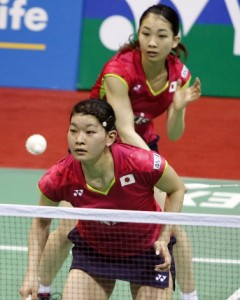 “That was a tough contest; I’m glad I pulled it off as I’d lost to her the last time,” said Marin.

The Spaniard faces Thailand’s Ratchanok Intanon, who had it rather easy over China’s Yao Xue, 21-14 21-8. India’s Saina Nehwal gave herself an opportunity to avenge a loss at India Open 2013 to Yui Hashimoto when she takes on the Japanese in the semi-finals.