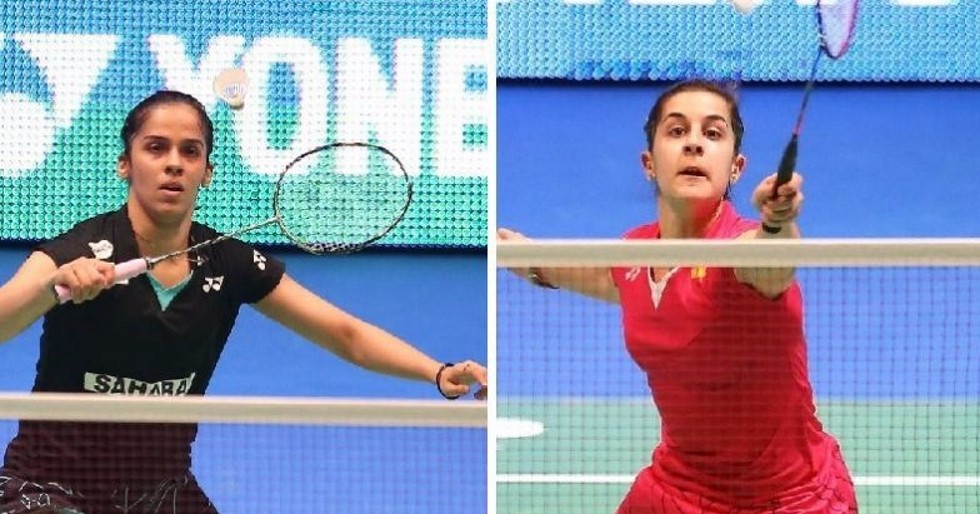 The race for the world No.1 ranking in Women’s Singles is set to become badminton’s hottest topic in the coming days, with Saina Nehwal and Carolina Marin both capable of wresting that coveted honour in the next week. Should this happen, it would be the first time a non-Chinese is atop the Women’s Singles world rankings in more than four years – the last being Denmark’s Tine Baun in December 2010.

It would also be a historic first for India or Spain as no woman from either country has ever achieved this distinction.

The prospect of this occurrence has gained notable currency recently with the early-season success which these two players have been enjoying and – with both slated to compete at next week’s Yonex-Sunrise India Open – Siri Fort Complex could well be the scene at which a new queen of badminton is crowned.

Badminton’s world ranking takes into account a player’s ten-best performances over the past 52 weeks. Currently ranked world No.2 with 74381 points behind China’s Li Xuerui (79214 points), Nehwal has everything in her favour to take over the No.1 position. Li, who was runner-up at the last India Open but is not participating this year, will lose 7800 points, dropping her tally to 71414.

Nehwal (BWF home page; left) took part in more tournaments in the last 52-week period – 13, compared to Li’s nine. Even if the Indian were to withdraw, her tally would be 74381 which would catapult her above Li Xuerui (below). Of course Indian fans are hoping Nehwal – who turned 25 on March 17 – can cap a historic week by winning the trophy which she has failed to clinch on home turf since the India Open joined the BWF World Superseries circuit in 2011. The only obstacle looming large in her way is if equally talented world No.4 Carolina Marin (72098 points) makes the final while Nehwal falls in the quarter-finals or earlier; or 21-year-old Marin (BWF home page; right) wins the tournament and Nehwal fails to make the final. Should both reach the final, Nehwal’s No.1 status is assured.

Add to this rankings race the fact that Marin ousted Nehwal in the finale of the prestigious Yonex All England Championships earlier this month and that they sit on opposite sides of the India Open draw and you have all the ingredients for an epic showdown in Delhi. “This is certainly a most intriguing situation and it underlines the wealth of talent coming through in Women’s Singles in the past season,” noted BWF Secretary General, Thomas Lund.

“We have a range of very good players who are vying for titles and who are motivated to be the No.1 player in the world. It’s a big achievement for any player and this competitiveness is great for our sport.”

Other players within striking distance are world No.3 Wang Shixian (China; 72227) and No.5 Sung Ji Hyun (Korea; 70704); neither is competing in India. The close contest between two non-Chinese players for the No.1 spot points to the intense rivalry in Women’s Singles. Once considered a Chinese bastion, this category has over the last few years produced various players capable of garnering top honours. Apart from Nehwal, Marin and Sung Ji Hyun (above), prominent names such as Chinese Taipei’s Tai Tzu Ying (below), Ratchanok Intanon (Thailand, No.8), PV Sindhu (India, No.9), Bae Yeon Ju (Korea, No.10), Akane Yamaguchi (Japan, No.13) and Nozomi Okuhara (Japan, No.14) have proved their mettle at the highest level. The diversity of nationalities is as much a reflection of the geographical spread of badminton as of the confidence that has swept through countries which were not previously recognised as badminton powerhouses in Women’s Singles. “China has shown its strength in Women’s Singles for the last few years, but we have seen the emergence of tough competitors from Chinese Taipei, India, Indonesia, Japan, Korea and Thailand – and of course places like Spain with Carolina Marin – a new emerging badminton nation which is slowly but steadily growing its position in the world of badminton. It’s an extremely interesting time,” added Lund.

However, China’s leading players like Li Xuerui, Wang Shixian and Wang Yihan are not likely to relinquish their dominance of the circuit in any hurry. The MetLife BWF World Superseries is now getting in gear and these accomplished campaigners have the rest of the season to prove their resilience.

If this trio get back to their best, the battle for supremacy is likely to produce a feast to satisfy even the most demanding and discerning fans!