The carnage that swept through the Yonex All England Open’s first round continued today as defending Men’s Doubles champions, Mohammad Ahsan and Hendra Setiawan (featured image), and Women’s Singles top seed Li Xuerui were bundled out of the tournament.

While the Indonesian pair – one of their country’s main hopes for glory – succumbed 21-16 19-21 21-18 to Fu Haifeng and Zhang Nan’s attacking ferocity, Li Xuerui was thwarted as much by a lingering foot injury as by her younger compatriot, Sun Yu, who benefited from the Olympic champion’s obvious impediment. The result of the all-China Women’s Singles clash – 21-13 21-13 – was a strong indication of how far last year’s runner-up was from her lofty best.

Nonetheless, the smiling loser gave praise where praise was due, noting Sun did well to take 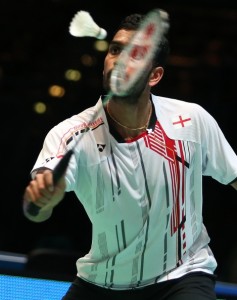 advantage of the circumstances and executed her plan perfectly.

“My foot really affected my movement on court. I was trying to be positive but I couldn’t find a way to get myself out of trouble. She deserved this win today. I’m out of one of my favourite tournaments which is disappointing but I know I’m not at my normal level so it’s okay,” reasoned the world No.1 player.

The tall and powerful Sun was pleased to progress in the tournament, stating it was “a good opportunity” for her even though it was at the expense of her highly-decorated compatriot.

Their team-mates Fu and Zhang also got the better of the reigning Men’s Doubles title-holders as the No.4 seeds failed to capitalize on drawing level, one game all. Despite looking out of sorts and exhibiting poor body language, Ahsan and Setiawan tried to keep pace with their Chinese opponents but repeatedly found themselves in defenseless situations or out of position as shots fell into the open court. High-flying Haifeng was particularly lethal from the back, with Zhang ready to punish any short returns. Though the Indonesians forced a third game, last year’s Denmark Open champions always had the answers when things got tight and duly completed their mission to reach the quarter-finals. 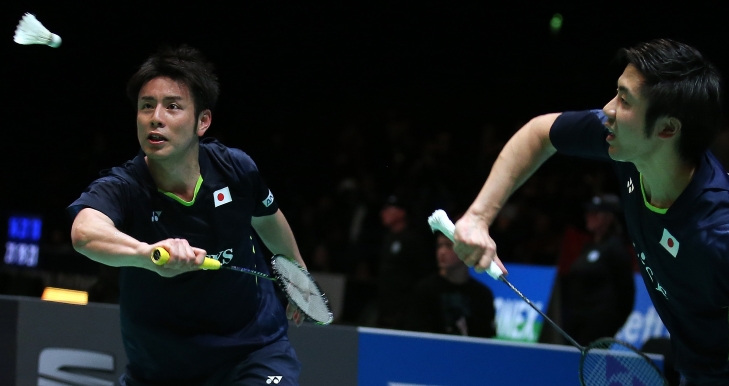 “This is a massive win for us. We’re very happy to beat the champions. We were confident and we played well. Thanks to the many fans who come to support us hh. We don’t want to let them down,” said a jubilant Zhang.

A subdued Setiawan conceded “our defense was not good today” and noted the Chinese are one of the several strong pairs in Men’s Doubles nowadays, all of whom are capable of beating each other.

Elsewhere, Mads Conrad-Petersen and Mads Pieler Kolding continued their dream run in Men’s Doubles with an efficient 21-15 21-13 performance versus Malaysia’s Goh V Shem and Tan Wee Kiong to land themselves in the All England’s last eight for the first time.

“We were a little nervous because we know they are talented but we played confidently. We have already done well here and it’s great to be in the All England quarter-finals,” declared Kolding, who sealed victory with one of his trademark towering smashes.

Still pinching themselves following their first-round dismissal of Korean kingpins, Lee Yong Dae and Yoo Yeon Seong, the Danes will now battle Indonesia’s Gideon Markus Fernaldi and Kevin Sanjaya Sukamuljo who also earned some bragging rights by ousting another giant-killing duo, India’s Manu Attri/Sumeeth Reddy, 21-13 19-21 21-15. The unchartered waters of an All England semi-final beckons for one of these fresh-faced partnerships!

No. 6 seeds Kim Gi Jung/Kim Sa Rang also fell prey to the “upset bug” running rampant through Men’s Doubles, tumbling 21-14 21-19 to Japan’s Takeshi Kamura/Keigo Sonoda. They will be across the net from Danish veterans, Mathias Boe and Carsten Mogensen, in tomorrow’s action. 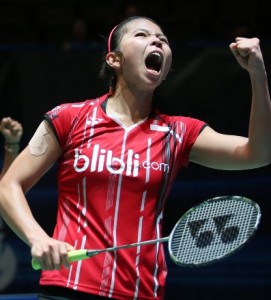 In Mixed Doubles, Praveen Jordan and Debby Susanto pressed their claim for the spotlight, rebounding to beat Hong Kong duo Chan Yun Lung/Tse Ying Suet, 15-21 21-16 21-15. Having disposed of China’s Xu Chen and Ma Jin in the first round, the Indonesians were keen not to squander their chance at glory and gradually worked their way into the match and assumed the ascendancy. They join their illustrious Indonesian colleagues and three-time defending All England conquerors, Tontowi Ahmad and Liliyana Natsir, in the quarter-finals. Looking sharp and at ease, the title-holders trounced Korean youngsters, Choi Sol Kyu/Chae Yoo Jung, 21-12 21-7, to set up a blockbuster clash with hometown heroes, Chris and Gabby Adcock, for a semi-final place.

“It’s going to be very tough. They are going for their fourth title in a row so that speaks for itself but we have nothing to lose and we will give our best,” said Chris, following the English couple’s success against another Indonesian combination, Kevin Sanjaya Sukamuljoa and Greysia Polii (21-12 21-18).

In Women’s Singles, the Wang Shixian stayed on track to retain her crown, repelling the challenge of Korea’s Bae Yeon Ju (21-12 13-21 21-9) while her Chinese counterpart, Wang Yihan, overcame a scare from Japanese Minatsu Mitani to secure a meeting with India’s Saina Nehwal.

“We always have very hard matches and she has been beating me,” noted Nehwal “so we will see what happens. There are no easy matches if you want to win the All England.”Established names like Tai Tzu Ying (Chinese Taipei), Sung Ji Hyun (Korea), Carolina Marin (Spain) and Ratchanok Intanon (Thailand) are also in the hunt for honours. 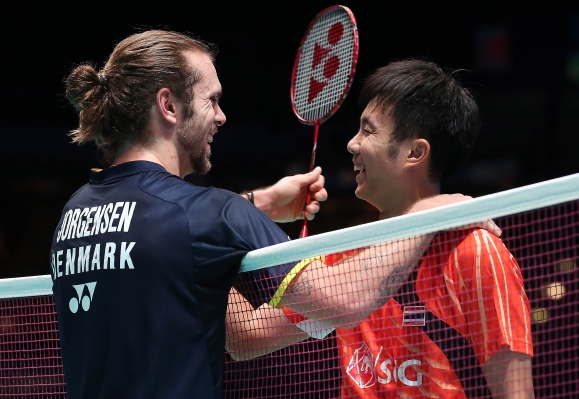 In Men’s Singles, China and Japan looked impressive with superstars Lin Dan and Chen Long cruising through as did their Japanese rivals, Kento Momota and the evergreen Sho Sasaki. Denmark’s Jan Jorgensen withstood a stern test from Thailand’s Boonsak Ponsana (28-26 21-15) while Rajiv Ouseph came up with the goods (17-21 21-19 21-18) in his night-time triumph over India’s HS Prannoy to give English fans another compelling reason to flock to the Barclaycard Arena tomorrow.