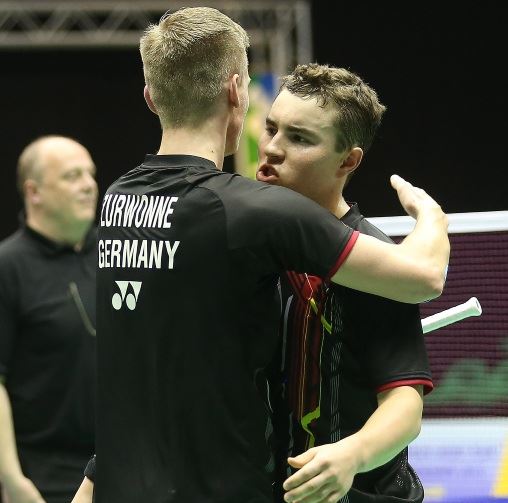 France nearly pulled the rug from under the feet of Germany in the quarter-finals of the 2015 European Mixed Team Championships at Leuven, Belgium, yesterday.

Defending champions Germany however survived the nerve-wracking encounter to progress into the semi-finals against Denmark. Former champions England will take on Russia in the other semi-final.

The Germans were nearly bounced out of the championships after going 0-2 down, with Fabian Roth falling to Lucas Corvee (Men’s Singles) and Karin Schnaase to Sashina Vignes Waran (Women’s Singles).

With Josche Zurwonne/Max Schwenger (featured image) losing the first game to Ronan Labar (right)/Baptiste Careme (Men’s Doubles), it looked desolate for Germany, but they bounced back in two close games, 14-21 21-19 21-19, to revive their hopes.

Johanna Goliszewski/Carla Nelte made it 2-2 beating Emilie Lefel/Delphine Lansac (Women’s Doubles), before dependable duo Michael Fuchs/Birgit Michels held off an inspired Gaetan Mittelheisser/Audrey Fontaine 24-22 21-17 to save the day for Germany.

Denmark have the opportunity to avenge their 2013 title loss to Germany in the final. In the quarter-finals, the Danes thwarted Ireland 3-1. Joachim Fischer Nielsen/Christinna Pedersen gave them the lead in the opening Mixed Doubles encounter over Sam Magee/Chloe Magee, 21-18 21-13.

Denmark consolidated through Jan O Jorgensen (Men’s Singles) who needed three games to get past Scott Evans, 17-21 21-17 21-12. Ireland pulled one back through Chloe Magee in Women’s Singles, before Anders Skaarup Rasmussen/Kim Astrup Sorensen made sure for the Danes beating Joshua Magee/Sam Magee 21-17 21-16 in Men’s Doubles.