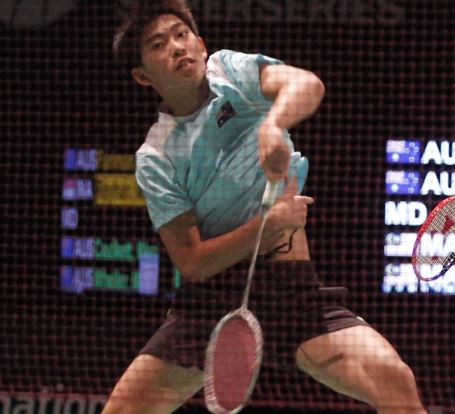 Men’s Singles top seed Pit Seng Low of Australia crashed out in the second round of the X-TRM Oceania Championships 2015 yesterday.

Ironically, the player who beat Low was his Men’s Doubles partner and compatriot Anthony Joe (featured image). It took just 31 minutes for Joe to register the upset, 21-18 21-14, over the top seed. Three other favoured players however made the quarter-finals. Michael Fariman (2), Ashwant Gobinathan (2; left) and Daniel Guda (3), all of Australia, progressed in straight games. Four New Zealanders – Luke Charlesworth, Brock Matheson, Maoni Hu He and Dylan Soedjasa – joined them in the last-eight. Of them, Matheson had the hardest path, as he struggled past compatriot Maika Phillips 16-21 21-17 22-20 in 40 minutes.

There were no surprises in Women’s Singles as the top two seeds eased through to the last-eight stage. Joy Lai and Jennifer Tam (both Australia) entered the quarter-finals with straight games wins. Australia enjoyed total dominance in the category with all eight quarter-finalists – Louisa Ma, Ruwindi Serasinghe, Talia Saunders, Wendy Chen, Melinda Sun and Elena Yee-Man Kwok were the others. No.4 seed Serasinghe was tested by New Zealand’s Courtney Trillo, but prevailed 24-22 14-21 21-18.

Tonga’s Lauti Naaniumotu/Metuisela Talakai Vainikolo posed a challenge to New Zealand’s Maoni Hu He/Kent Palmer in the first game but could not sustain it, going down 21-16 21-5. Talia Saunders and Jennifer Tam (above) made the quarter-finals in Women’s Doubles too, after receiving a first round bye. They take on New Zealand’s Angie Leung/Jasmin Chung, who beat compatriots Maria Mata Masinipeni/Melinda Sun 21-18 21-14.

Ruwindi Serasinghe, who had a tough battle in Women’s Singles, faced a similar situation in her Mixed Doubles opening round too. Serasinghe and Edwin Luk overcame New Zealand’s Dylan Soedjasa/Justine Villegas 21-9 19-21 21-18.