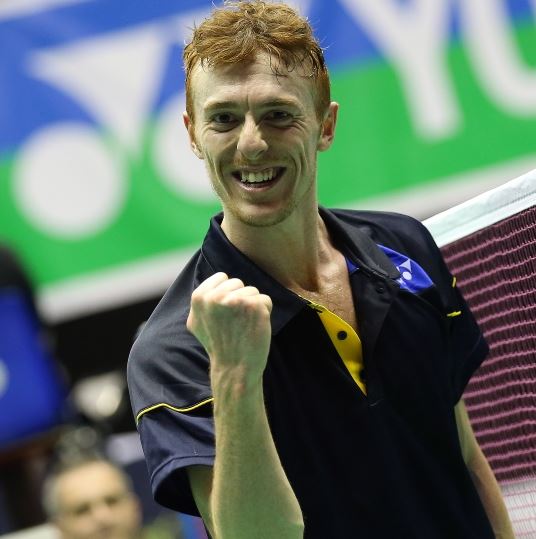 On a day of unusual results, France eased past Russia, while Denmark were pushed to the edge by Netherlands.

Germany, without the services of Men’s Singles ace Marc Zwiebler, were dealt a blow by Scotland. The Scots won the opening salvo through Kirsty Gilmour (below) in Women’s Singles as she outgunned Karin Schnaase 21-15 21-15. The next match (Men’s Singles), between Kieran Merrilees (BWF home page) of Scotland and Dieter Domke, was a topsy-turvy affair. Merrilees had almost wrapped it up at 17-12 in the third, but Domke picked eight points in a row and had three match points. Merrilees refused to buckle and turned it around for a memorable win: 23-21 13-21 22-20.

Gilmour returned to court for her Women’s Doubles with Imogen Bankier, against No.28 pair Carla Nelte and Johanna Goliszewski. The Germans endured a tricky With Josche Zurwonne/Max Schwenger overpowering Martin Campbell/Paul Van Rietvelde 21-5 21-17 to clinch the Men’s Doubles, Germany regained the momentum and appeared favourites to clinch the tie as No.10 pair Michael Fuchs/Birgit Michels took on No.18 pair Robert Blair/Imogen Bankier. However, the Scots gained an early lead in the third and kept it all the way to seal the tie 12-21 21-12 21-18.

In Group 4, France enjoyed a surprisingly smooth verdict over Russia. The French wrapped up the tie winning the first three matches before Russia restored their pride in the next two. However, the reliable Mixed Doubles duo of Joachim Fischer Nielsen/Christinna Pedersen prevented further damage for the Danes. Nielsen/Pedersen were too good for Jorrit De Ruiter/Samantha Barning, 21-10 21-14.

England had a flawless day, beating Ireland and Belgium by identical 5-0 margins in Group 2. Earlier in the day, Denmark too had it easy over Poland, clinching the tie 5-0.

The quarter-final draw consists of:  Russia vs Scotland; Netherlands vs England; Denmark vs Ireland and France vs Germany.