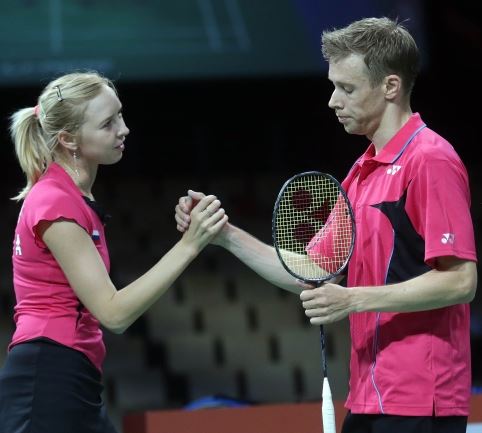 Vitalij Durkin and Nina Vislova spared Russia the blushes with a narrow victory over Sweden on the opening day of the 2015 European Mixed Team Championships yesterday. Going into the final match, the Group 4 tie was evenly split at 2-2. Russia were given the lead in Women’s Singles by Ksenia Polikarpova, who recovered from a stumble against Ellinor Widh, 21-7 19-21 21-15. Mattias Borg brought Sweden right back into the contest beating Vladimir Malkov in Men’s Singles, 21-18 21-18.

With European Men’s Doubles champions Vladimir Ivanov/Ivan Sozonov taking court for the next match, the Russians would have felt they were safely through. However, they were dealt a huge shock with Nico Ruponen (left)/Filip Michael Duwall Myhren blanking them in straight games, 21-19 21-18.

It was left to Durkin and Vislova (featured image) to salvage the situation for Russia, which they did despite being run close by Jonathan Nordh/Emelie Fabekke. The Russians prevailed 21-18 23-21.

Earlier in the same group, France outgunned Sweden 4-1. Sweden were briefly in the contest after Gabriel Ulldahl surprised Brice Leverdez in Men’s Singles to make it 1-1, but France comfortably won the next three matches. In Group 1, Netherlands were surprise 5-0 winners over Poland. Despite the experience of Poland’s doubles veterans, they were unable to prevent the whitewash. Jacco Arends/Selena Piek stormed past Robert Mateusiak/Agnieszka Wojtkowska (Mixed Doubles) 21-17 21-16; Eric Pang was stretched by Michal Rogalski 14-21 21-13 21-18 (Men’s Singles), before Soraya De Visch Eijbergen (above) made sure for Netherlands beating Weronika Grudzina (Women’s Doubles) 21-14 21-12.

Scotland and Germany received a walkover from Spain in Group 3.