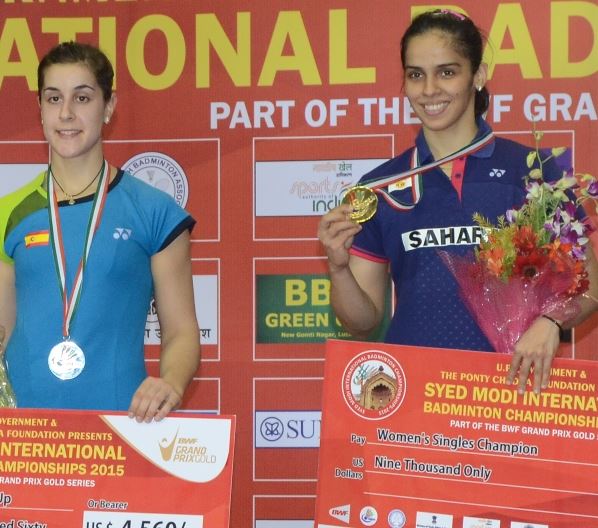 While Parupalli held off a strong challenge from younger compatriot Kidambi Srikanth to win the Men’s Singles in straight games, Nehwal dug herself out of a dire situation against World champion Carolina Marin to prevail in three in the Women’s Singles final.

Parupalli (right) was the apparent underdog against China Open winner Srikanth, but was able to use his greater experience to quell the fast-rising youngster. The Commonwealth Games champion was down two game points in both games but kept his composure to record a 23-21 23-21 result.

Srikanth entered the final at the end of a busy week, in which he was pushed to the decider in three previous matches. He was down match point against Malaysia’s Tan Kian Meng in the second round but survived 18-21 21-13 22-20. Another Malaysian, Iskandar Zulkarnain Zainuddin, too pushed him to three games in the third round. Srikanth then fought past compatriot HS Prannoy in an hour-long semi-final. Parupalli had a smoother ride to the final, with his stiffest test coming in the semi-finals against Viktor Axelsen. The Dane was up a game and had his chances in the second at 20-all, but Parupalli edged past to level at a game apiece and then routed Axelsen in the decider: 18-21 22-20 21-7.

Local favourite Saina Nehwal (featured image; right) had her hands full against Marin. The Spaniard fought off a deficit to take the opening game. From 13-all in the second it became the closest of contests, with the two going neck-and-neck. Nehwal survived two match points and clinched the game on her third opportunity.

The final – an 80-minute affair – was Nehwal’s toughest contest of the week. The Indian had few problems in dismantling the challenge of compatriot Arundhati Pantawane in the quarter-finals and Thailand’s Nichaon Jindapon in the semi-finals. Marin too had a fairly comfortable journey to the final, although she was taken to three games in her second round against India’s Tanvi Lad (21-23 21-19 21-6).

Boe and Mogensen (above; right) would have expected trouble against Vladimir Ivanov/Ivan Sozonov in the Men’s Doubles final but the Russians could not rise to the occasion. The Danes won the opening game in a canter and though the Russians saved a match point in the second, they could not hold off the inevitable: 21-9 22-20. Among the upsets was the defeat of Denmark’s Mads Conrad-Petersen/Mads Pieler Kolding to India’s Manu Attri/Sumeeth Reddy in the quarter-finals. The Indians saved two match points in the third to prevail 21-18 4-21 24-22 over the No.2 seeds.

In the all-Malaysia Women’s Doubles final, Amelia Alicia Anscelly/Soong Fie Cho (above; right) stole a march over their fancied compatriots Vivian Hoo/Woon Khe Wei 22-20 21-15. After a close first game, the No.4 seeds led from the start of the second and closed it out with plenty to spare over the Commonwealth Games champions. Earlier, Anscelly/Soong ended the campaign of local favourites and No.2 seeds Jwala Gutta/Ashwini Ponnappa in the semi-finals, 21-16 19-21 21-13.