The Dane was in a must-win situation in his final Men’s Singles Group B match against India’s Kidambi Srikanth, who only needed to win a game to assure himself a place in the last-four. With Srikanth playing at a fiery pace and taking the first game, Jorgensen had his back to the wall but he came through after a tricky period in the third game. He topped the group on points difference, with Srikanth finishing second and Japan’s Kento Momota third.

“He needed to win one set; I had to keep doing my best, keep getting every shuttle over the net. You could see he was a bit slow in the second and third. I’m happy to come through even though I was struggling,” said Jorgensen.

“He is a bit like Momota, rallying around and with killer shots. Actually, I had the same game plan as I did (against Momota) but I didn’t pull it off yesterday. He just needed one game, and I just needed to push hard in two others. It’s tough to know you’re through and then to see this crazy Danish guy fighting all he can.” 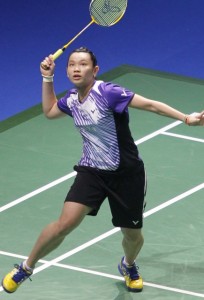 Nehwal had her hands full against Bae, whose pace and power mixed with the odd soft shot kept the Indian chasing the shuttle. However, the Korean couldn’t sustain that high pace and it was Nehwal who prevailed 15-21 21-7 21-17.

“I should’ve fought harder in the first game,” said Nehwal, who was backed by a noisy crowd.

“Bae is the kind of player who will pick up everything… you need to be faster than her to pick up her shots. Under such situations you’re under a lot of pressure. As expected it was a tough fight. The third was a challenge for both of us. Although I was in the semis after winning the second game, I wanted to win the match. From the last three days I have been playing tough matches. We know each other’s game and every match is a challenge. My aim was to win the match even though I knew I had made the semi-finals after winning the second game. When I’m on court, I want to win each match and not give my opponent the confidence that she can beat me the next time.”