Hans-Kristian Vittinghus earned his best result of the year so far by making the semi-finals of the BWF Destination Dubai World Superseries Finals beating Kenichi Tago.

The Dane, who has never been in the semi-finals of a regular Superseries tournament, continued with the good form he has shown in this event, his 21-19 21-16 result helping him to second spot in Men’s Singles (Group A) behind China’s Chen Long. Tago finished his assignments with two losses and a win, while Korea’s Son Wan Ho, one of the pre-tournament favourites, lost his first match and then retired midway through his second. 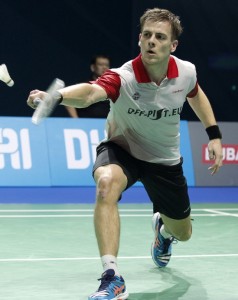 “I felt he was not moving like he usually does. That made me anxious because I really wanted to win. I had trouble being focussed on the gameplan instead of the result. I kept fighting with it all the way through. In the end I had good control, and from the middle of the second game I was not in doubt.

“Being in the semi-finals is great, it’s the perfect way to finish the year. Hopefully it won’t stop here. No matter who makes it through the group, I have a chance of winning my match. I would like to play (Kidambi) Srikanth; I beat him at the French Open and since then he has been playing unreal.”

Tago shrugged off the defeat, acknowledging that he hadn’t been at his best, and was unwilling to blame his form on injury.

“The first half of year was good; but the latter half was not. It’s not possible to play at a high level all the time. I had an injury during the World Championships but I have recovered and it has not had anything to do with my form. Everybody thinks my injury has affected me. For me it’s more about luck and my emotional state.”

The event could not have gone worse for Wang Shixian as the Women’s Singles top seed finished without a point from her three Group A matches. Wang’s misery was complete after Korea’s Sung Ji Hyun eased past her 21-7 21-11.

“I’ve been playing badly as I’ve blisters on my feet,” said Wang. “I need to review the results this year with my coaches and hope to come back strongly next season.”

Christinna Pedersen and Kamilla Rytter Juhl’s defence of their Women’s Doubles title ended at the group stage as they went down 21-5 21-18 to Korea’s Jung Kyung Eun/Kim Ha Na (featured image) in Group A.

“Lee and Tsai played last night so it seemed like they were tired,” said Hayakawa. “We had more time to rest so we were fresh. We knew we had to win this match to make the semi-finals. We were disappointed yesterday because we had a 19-16 lead in the second game but we lost to Boe and Mogensen.”

In Women’s Doubles, World champions Tian Qing/Zhao Yunlei sealed their place on top of Group B with a 21-14 21-11 result over Japan’s Miyuki Maeda/Reika Kakiiwa.